Wow. Well, okay. That was something. What if death wasn’t the end? What if after death, you are transported to a world of Dungeons and Dragons on crack? Though the first... 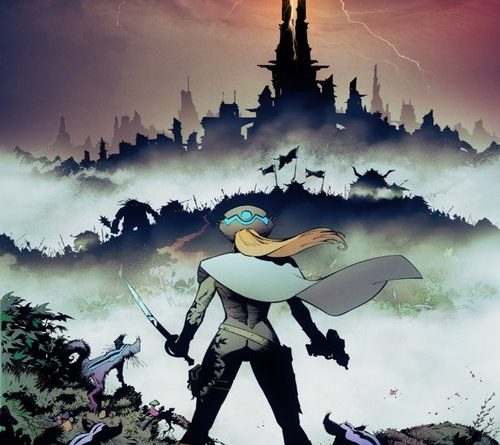 Wow. Well, okay. That was something.

What if death wasn’t the end? What if after death, you are transported to a world of Dungeons and Dragons on crack? Though the first issue leaves you thoroughly confused as to what is actually going on, this seems to be the story behind Reborn. Although I will admit I have my own theories about what’s happening here. We will get to that in a second.

The issue starts off startlingly enough with a shooting sequence, which gets the blood pumping through your veins (and through the pages) from the getgo. There’s a quick change of gears and we are now focusing on Bonnie, the protagonist of the story. Bonny is old. She is going to die – that’s life. As she faces the end of her life, she begins to look inside herself. What happens after the end of her life? Does her existence simply shut off, or is there something more? Should she be afraid, or should she welcome it?

The story shifts once again, but this time into a world much, much different. Think The Lord of the Rings but crazier. The art is grandiose and breathtaking. It’s super out there and strange – just how I like my comics. Now, while this seemingly comes out of nowhere, as I stated above, I have my own theories. From what I’ve read from Millar, the man certainly likes his twists, and Reborn is the type of story that could be absolutely destroyed by a certain twist. I think you know exactly what twist I’m talking about, too – the “it was just a dream” twist.

The phenomenon known as the Near-Death Experience (NDE) has been hotly debated in the world of science and philosophy. Often, on the verge of death, normal human beings will experience extraordinary spiritual sensations – sometimes visions of Heaven, or lost loved ones. Much like the “dream” twist, if this ends up being the case for Reborn, I will be sorely disappointed. To me, that’s a cop-out way of storytelling, and Reborn is off to such an awesome start that anything but an incredible ending will be disastrous.

Yes, it is true that I may be jumping the gun. After all, it’s only the first issue. But maybe that’s saying something about the strength of this debut issue. I’m so impressed with it that I’m already thinking about what’s going to happen (hopefully) multiple arcs from now. Or, it could just be that I’m neurotic. Probably that.

Regardless, Reborn #1 contains a wealth of awesome imagery and a draught of answers, which is exactly the way to rope in a potential audience. Not that Mark Millar needs to really do anything to convince someone to read his work at this point, especially when he’s teamed up with Greg Capullo on art duties. I have no idea what to expect in the coming issues, but I have a feeling it’s going to blow my mind. Oh, please let this series end up being awesome. This is too strong of a debut for it not to be.

The debut of Reborn explodes into a blast of colorful “WTF”, and will hopefully continue to get stranger and more abstract.