Don't read Motor Crush unless you're in the mood to get almost unbearably excited. 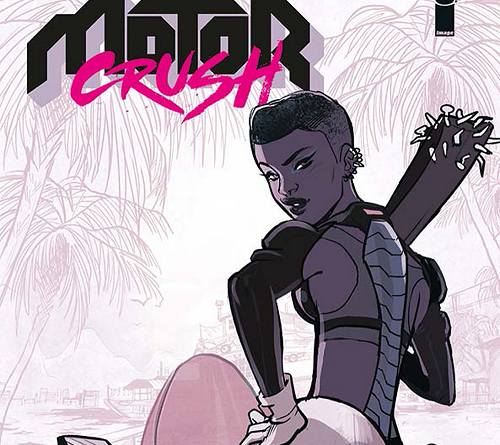 Every once in a while, a comic comes along that just gets everything right. Motor Crush is that type of comic. It’s a neon-colored, kick-ass story full of white hotel intensity that’s had me buzzing from the start.

The first volume, collecting issues 1 through 5, opens up with protagonist Domino Swift tearing through the streets on her souped-up bike. She’s a newcomer to the world of professional motorcycle racing but a veteran in the seedy, violent, underground world of illegal bike races. In the future, bike racing is the biggest sport out there – and everyone wants in.

To get an edge on the competition, street racers will use something called Crush. It’s generally used on a bike’s engine, but Domino quite literally inhales the stuff. But why? It should kill her, yet she needs it to stay healthy and sane. What makes Domino so different from everyone else?

Motor Crush Volume 1 rips through the reader at breakneck speeds, twisting and turning so fast that the story could become quickly derailed in less capable hands. Instead, the plot points come as welcome, thoughtful surprises, keeping the reader engaged and hungry for more. The book boasts an excellent cast of characters and though Domino is the main focus, there’s enough personality given to the secondary characters that it’s sometimes hard to choose a favorite.

Swift’s sometimes arrogant and always dangerous tendencies are complemented well by her ex-lover Lola’s reluctant care and good nature. Though Domino is a firecracker, the addition of Lola and Domino’s adopted, well-meaning father make for an excellent, multifaceted team. There’s a lot of heart in this comic but it never feels too sappy; Motor Crush is too busy bashing your face in with intensity to ever slow down and get overly mushy and gooey.

Cameron Stewart, Babs Tarr, and Brendan Fletcher make an excellent team. Though this fact has already been established by their work on Batgirl, the trio has really doubled down and created something special once again. The art is highly stylized; it’s brightly-colored and dazzling. No matter how fast-paced the story gets, the narrative is always concise and intriguing. There’s just about every character you could want in a comic. The good, the bad, and the weird. And as the story develops, the science fiction aspect becomes more and more prevalent. It’s a welcome surprise without a doubt.

This is the kind of book that could be recommended to anyone. It doesn’t matter if you’re into racing or not. It’s an adventure from start to finish with brilliant splash pages and astounding action sequences. It never lets up, and even though I’ve used just about every word in my vocabulary to illustrate how the story focuses on speed, it never goes too fast to the point where anything feels rushed. It’s right on the edge of breaking up and losing control but it always manages to keep things together for the next lap.

Don’t read Motor Crush unless you’re in the mood to get almost unbearably excited. I need to cool down after this one. Bob Ross, anyone?