After reading Maxwell’s Demons #1, I went back to the cover and saw what I had missed the first time.  Written by Deniz Camp, with art by Vittorio Astone, the cover depicts Maxwell sitting in his room, surrounded by stuffed animals. Most are cuddly, but the two in his hands are men. One looks like Max’s father, carrying a beer bottle. That wasn’t the detail I’d missed – my guard was up when it came to Max’s dad from the beginning – but the title went right over my head. I knew better, but let the sweetness of the animals on the cover sway me. While I was paying attention to them, I should’ve been paying attention to Maxwell’s Demons. 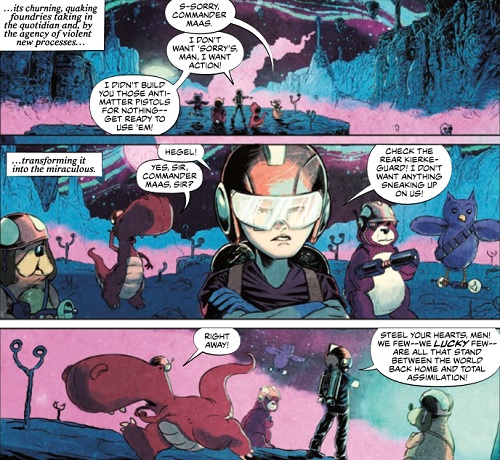 To his father’s annoyance, Maxwell spends most of his time in his own world. Where that expression used to mean a child’s imagination, Maxwell has turned his imagination into a virtual reality. Technology is the way the world’s headed, but already the issue breaks with innocence, by corrupting what once was a simple act of pretending, with gadgets

Then the crows start appearing outside Max’s house, and a new person shows up in his world called Captain Corvus. Can Captain Corvus be trusted? Most of Max’s world is comprised of toys from his environment – in that sense, why should the crows be any different? – yet Corvus is greeted with suspicion.

Reading Maxwell’s Demons is a constant reminder of how important words are, starting with the word “quotidian.” It’s not often a word’s meaning can’t be resolved by context clues. This one required a dictionary and is part of Max’s narration. A ten-year-old genius, it’s important to see his vocabulary reflect the level of his intelligence but it can be divisive. Looking up words breaks-up the flow of reading an issue, and when it happens so early, you brace yourself. 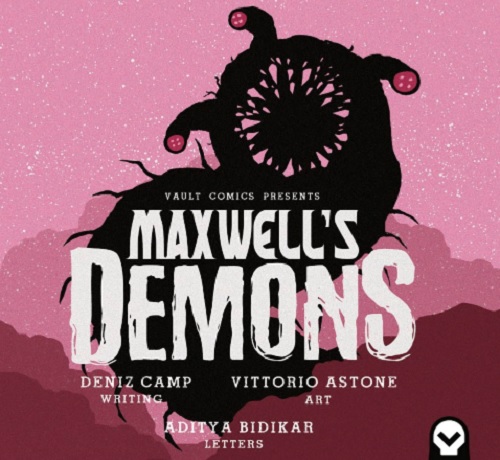 In this case, it was a false alarm, but I found myself being hyperaware of the other words Camp uses and it served to make the experience even stronger. Take how he swaps in the word “assimilation” for “annihilation” in this sentence: “We few – we lucky few – are all that stand between the world back home and total assimilation.” I at least misread this sentence twice before realizing it wasn’t “annihilation” and the meaning changes completely.

The phrases Camp employs are similarly dense and illustrative. When Max returns home from his time in the virtual reality, he clicks a button to activate an “Earth umbilical.” With that one word, “umbilical,” you have so much going on. The umbilical cord is what connects a child to their mother. It’s also almost always mentioned in concern with being cut.

Astone’s color scheme is spot-on. It’s probably premature to call out a trend but, like Rosie Packwood’s colors on Madius Comic’s Bun, I appreciated that the colors weren’t traditionally gendered. Maxwell’s Demons features a male protagonist, but pink is most prominent. In conjunction with the stuffed animals and Aditya Bidikar’s classy lettering for the narration, these colors work to catch you off guard with a false sense of security. 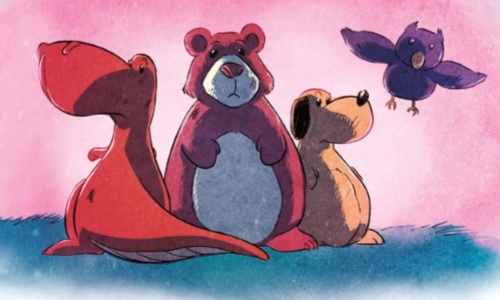 There are a lot of tip-offs this comic isn’t made of stuffing. At one point, Astone compresses three issues worth of story onto one page. In a parallel universe, there’s a version of this comic that gets to be the exciting adventures of Max and Captain Corvus. That’s not this one. Astone also realizes you don’t need blood for a scene to feel graphically violent. There’s a page that’s shattering as you understand what’s going on.

Maxwell’s Demons isn’t an easy comic to read emotionally. It’s the kind of comic where you almost need something else to read afterward, to help cool down (and for that I strongly recommend Marvel’s girl genius, Moon Girl and Devil Dinosaur), but painful stories exist for a reason. Maxwell’s Demons wouldn’t hurt so much if we didn’t care about Max’s journey.