There’s a general understanding among consumers of stories that whenever a character is introduced as the last anything, there’s going to be someone who pops out of the woodwork...
by Rachel Bellwoar June 19, 2017 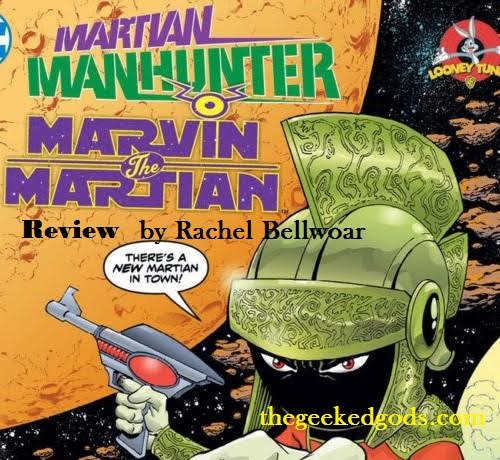 There’s a general understanding among consumers of stories that whenever a character is introduced as the last anything, there’s going to be someone who pops out of the woodwork to claim they’re their lost fellow. Logan Echolls believing he doesn’t have a sibling on Veronica Mars. The Doctor under the impression that he’s the last Time Lord on Doctor Who. Gonzo in Muppets in Space, or Tigger in The Tigger Movie. Sometimes they’re frauds, and sometimes, as Xander puts it on Buffy, “I knew this ‘I’m the only one, I’m the only one’ thing was just an attention-getter,” but the fact is they will contest their existence, and time will be given to sort out if they’re the real deal. 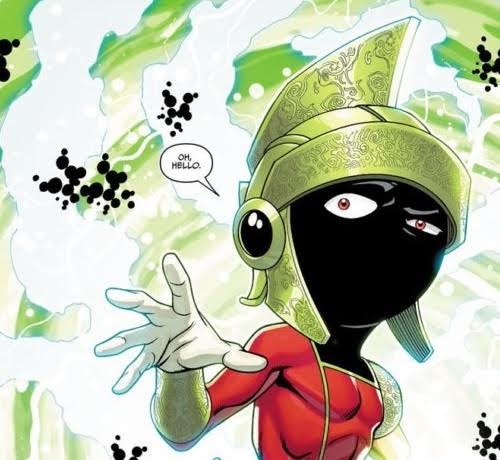 As comes from dropping a cartoon into a comic, there’s plenty of fodder in noting how the two martians are different. On the one side, you have a martian who wants to destroy Earth. On the other, a martian who wants to protect it. J’onn can fly, while Marvin uses a flying saucer. There’s a deeper pathos, however, in J’onn being torn between his responsibilities and connecting with someone from his home planet. Not in his wildest dreams did J’onn believe there was another survivor from Mars, but now that he’s met Marvin he has to prepare to fight him. That difference, between hope and reality, is what makes a biting conflict to read. 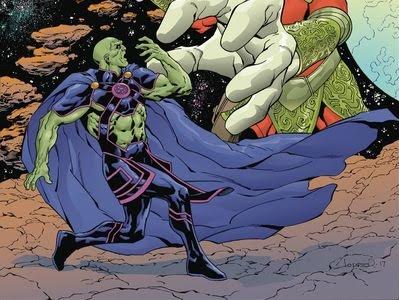 Similar to Supergirl, which has addressed the discrimination J’onn faces as a martian in episodes like season one’s “Falling,” writers, Steve Orlando and Frank J. Barbiere, use the first story, “Best Intentions” to look at how J’onn is treated differently when he appears in his natural, green form. Where this can come up in Supergirl, it’s a much more pervasive topic here because J’onn isn’t passing as a human. That discrimination is something he has to face every day, and TV can’t always address prejudice’s constancy in the same way. J’onn has a way he can blend in. By not using it Orlando and Barbiere put him in the same boat as many readers who will be picking up this comic.

For two properties with different tones, the issue splits the difference by having Aaron Lopresti and Jerome Moore’s art in “Best Intentions,” be more earnest, and John Loter’s in “The (Next To The) Last Martian” be more animated. Brighter colors mirror the theatrical shorts which Jim Fanning’s writing evokes, and J’onn’s smart way of curbing Marvin’s plans ends the issue with a laugh.

“Best Intentions” isn’t without humor, finding ways to gently poke at J’onn and Marvin’s height difference, while also giving Marvin’s armor an upgrade that’s adult. This is a Marvin that can be taken seriously without sacrificing his exaggerated mannerisms. 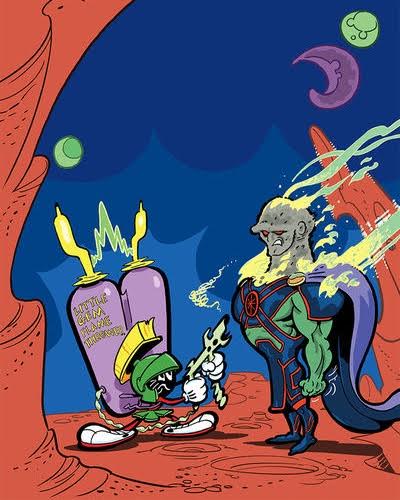 “The (Next To The) Last Martian”