Afar, set for release on March 29th, is a story about youth, self discovery, and the secrets of space. 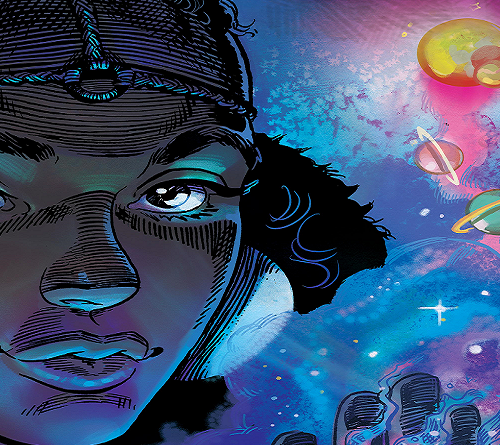 There’s something so satisfying about reading a self-contained graphic novel. No, the story doesn’t exist for more than one volume, but when done correctly, they can be just as powerful. As they say, quality over quantity. If you need further proof, all you must do is read Afar, a beautifully illustrated and tightly woven story of friendship, growing up, and the mysteries of space and time.

Leila Del Luca’s story revolves around a young woman named Boetema and her younger brother Inotu. They exist in an unnamed postindustrial desert wasteland that borrows much of its imagery from Egypt’s distant past. When their parents leave them to make a life for themselves, it isn’t soon before the two of them are forced to flee their home after getting involved with a dangerous cyborg.

All the while, Boetema has been having strange dreams. It doesn’t take long for her to realize, though, that these may be more than mere dreams. In fact, she may be traveling to distant worlds within the confinement of her earthly slumber. The reader can join Boetema as she explores new societies and strange creatures to learn how to manage her talents. Should she be interfering with these people’s lives that she inhabits? And if so, what are the consequences? As with any great story, these questions are explored in detail.

Del Luca relies on Seaton’s magnificent art to explore these questions, as well as the locale, instead of cliched exposition. Where is Boetema at this current moment? Let the environment tell you. The people in the background; the design of the cities; they are the ones carrying the story. While there eventually does get to a point when there is some exposition – how could there not be at least a little? – It feels necessary to tie the story together. Up until that point, we’ve only gotten fragments. Towards the end of the tale, they become tied together, and it all makes sense. Which is great; Afar doesn’t seem like a book that intends on wallowing in ambiguity. 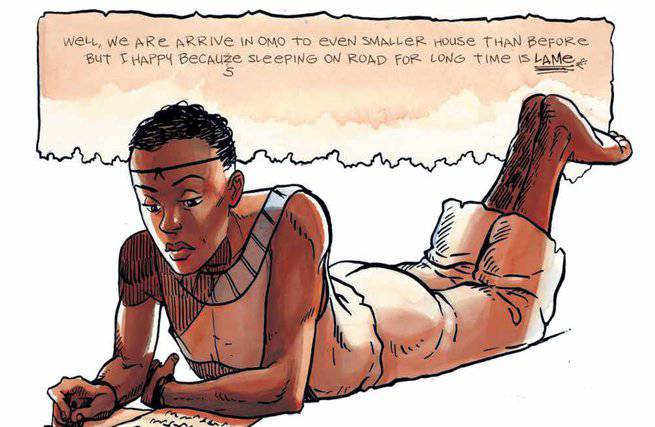 Though Boetema’s gifts are certainly a focal point, Inotu’s personal growth is explored as well. The two of them hold a special relationship as brother and sister. They argue; they make mistakes. But at the core, they are two of the truest friends around. Boetema is older and full of angst, while Inotu is young and full of innocence. His unwavering childlike optimism appears to be faithful to his age bracket as well as highly endearing.

I understand that many comic book fans have a serious love for long running stories that span years, if not decades. But there’s nothing wrong with a story that exists for only one point in time; it begins, it tells its story, it ends with a satisfactory conclusion, and disappears – but if it’s successful, it stays with you in your mind. Afar does this wonderfully. It’s a gorgeously designed, expertly told story rooted in friendship and the extraordinary.

But perhaps the icing on the cake comes after the story. At the end of the book, we are treated to email correspondences between the author and the artist, with critiques and praises alike. We are given insight into the creative process, and Del Luca’s radiant enthusiasm almost burns through the pages. It makes this story that much more sweet.