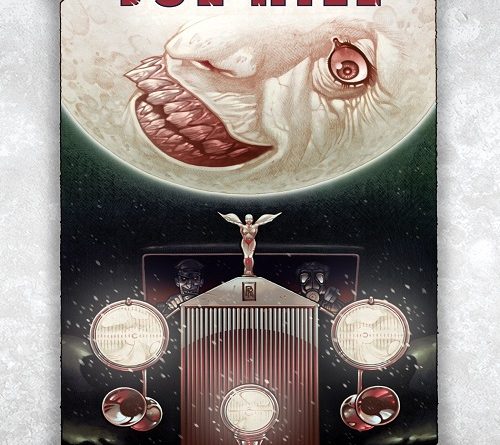 After having only read two books by Joe Hill, I’m ready to call him one of my favorite modern authors. As stated in my review of his most recent book, The Fireman, his books are simply too compelling to put down. And though I still back my statement of him being one of the best modern horror writers, I do not believe that NOS4A2, his third novel, is of the same caliber as everything else he has written.

Which is not to say that NOS4A2 is bad, at all. It’s actually nothing short of phenomenal. However, there is one glaring problem that is hard to ignore. But let’s talk about the good, first.

In 1986, Vic McQueen is a young girl with a bike that can take her places. While riding her Raleigh, she is able to take a path over a wooden bridge – the Shorter Way Bridge – and she will come out on the other side to whatever location she is looking for. Even if she doesn’t know where that is. A search for a lost bracelet, for example, takes her to a sandwich short. Lo and behold, the bracelet, miraculously, is there. And when she goes searching for trouble in a fit of emotional desperation, you’d better believe she finds it.

On this particular journey, Vic comes face to face with a Nosferatu-lookalike named Charlie Manx. Manx, much like Vic, has his own way to miraculously go wherever he needs to go. In his case, it’s a 1930’s Rolls Royce with a vanity plate with the characters NOS4A2 on it. And his destination is Christmasland, a place for unrestrained fun and joy for children only. Yes, Manx is one mean sonofabitch.

Vic escapes – the only child ever to do so – but Manx won’t let her go that easily. The rest of the book follows their ensuing battle of cat and mouse. It’s tragic, disturbing, and thrilling. The character of Manx is absolutely superb; his dialogue, his characteristics, his motivations. He has a henchman, too, and he is almost as interesting, and maybe even a little more deranged. In fact, there is a whole slew of characters in this book who are nothing short of compelling. Almost every single one has a near-gravitational pull towards them…with the exception of one.

This is where the fault with the novel lies. Here, in Hill’s most imaginative work, every character is believable, no matter how fantastic and supernatural they may be, besides the lead. Vic McQueen is simply not an interesting character, and it drags the book down.

She’s a damaged woman now after the traumatic events of her childhood. She becomes a children’s author, covered in tattoos, with a foul mouth, bad attitude, and a horrible drinking and drug problem. Somehow, in all of the effort put into the character, she just falls short of everyone else.

But maybe that’s inevitable when you have a character as strong as Manx. His sly mannerisms and his volatile yet calculated behavior, coupled with his maniacal obsession with Christmasland, is almost too powerful. How could any character compete with that? As much as I enjoyed the book, it seemed to drag on whenever McQueen was the main focus.

But please, read this book. The pros outweigh the cons heavily; they’re only discussed here as a way for me to vent. The entire idea behind the whole book – which I obviously won’t spoil – is so genius that it hurts.

NOS4A2 is a good story, and though I can’t say it’s as good as Heart-Shaped Box or The Fireman, there are parts about it that I don’t think I’ll be able to forget anytime soon. Charlie Manx is one of the best new villains in all of horror, and I would do horrible things to get Joe Hill to write a sequel and bring him back for it. Maybe I’m a little obsessed with Christmasland, too.

The This Ain’t Right Movie Podcast-Gremlins