In The Rattler, Stephen Thorn and his fiancee break down on the side of the road. When they hail a seemingly well-intentioned woman for help, she hitches up their broken down...

In The Rattler, Stephen Thorn and his fiancee break down on the side of the road. When they hail a seemingly well-intentioned woman for help, she hitches up their broken down car and begins to tow it away. There’s only one problem; she’s not stopping. Even worse is that Thon’s fiance, Catherine, is still inside.

Ten years have passed and Catherine is assumed dead by everyone besides Thorn, who refuses to give up the search. In that timespan, he has become an outspoken proponent for victim’s rights. Thorn has built a media empire out of making sure criminals get what they are owed. To him, this means no second chances. He is bitter and broken but still determined in his cause. Soon, he realizes that he can speak to Christine – but only through another person’s death. This begins a journey to finally getting his long-lost lover back.

Through the bodies of the dead, our protagonist gains more and more clues to solving his tragic mystery. And, as you may assume, this means that there is a lot of death in this single graphic novel. It’s bloody and it’s gross. Writer Jason McNamara is a sick man, and I mean that in the best of ways. If making your protagonist suffer and endure physical pain was a competition, McNamara would be a close contender for first place. 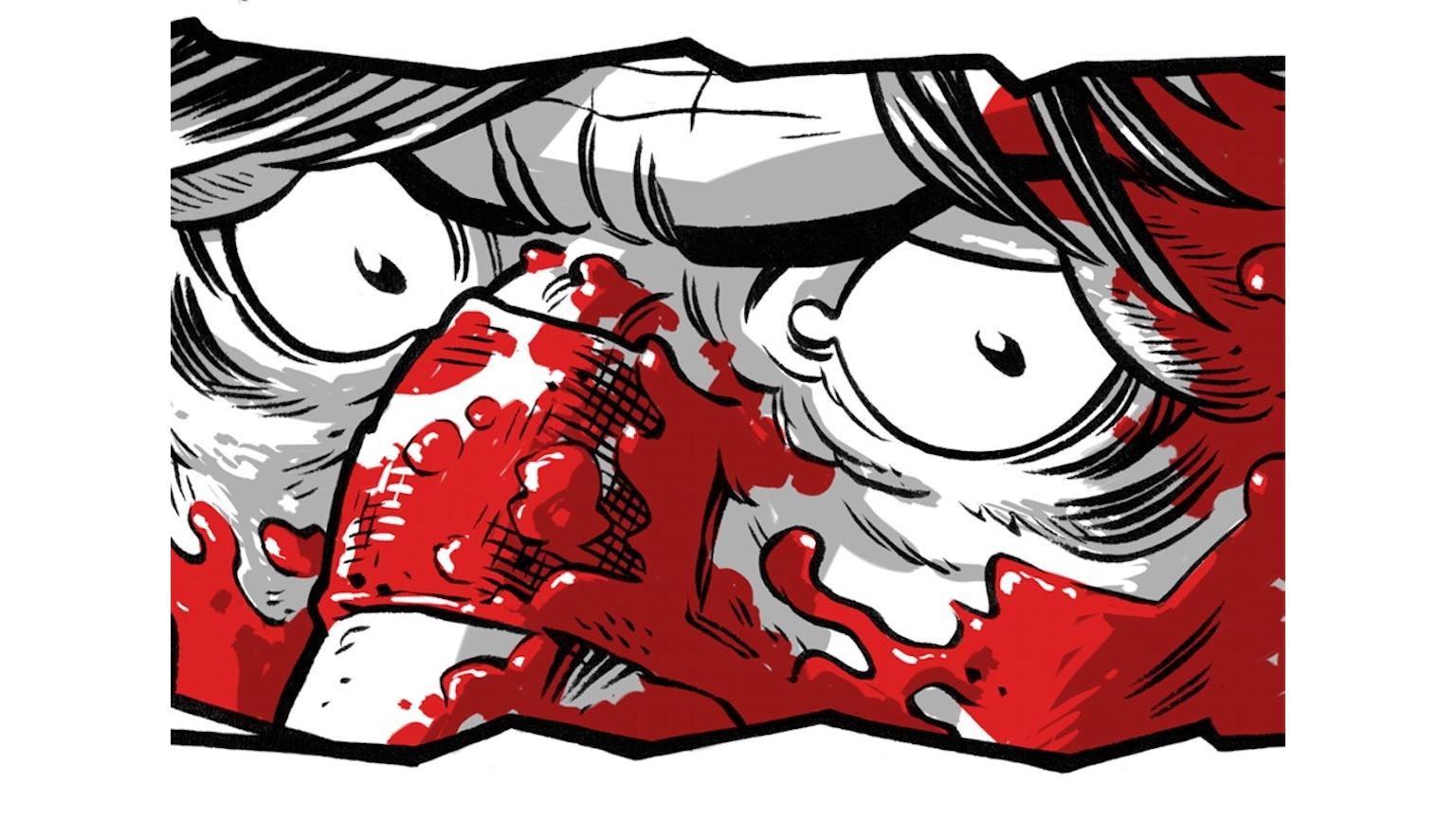 And while the blood flows freely through these pages, Greg Hinkle’s illustrations never stray too far from a cartoony, throwback style. This works amazingly for the story, as it helps the story from getting too outlandish. This may be confusing, but let me explain. The Rattler plays out like a very violent cartoon. In a cartoon, nothing is off-limits. People can die in ridiculous ways, and the passage of time doesn’t really make all that much of a difference. It’s like entering another dimension where anything goes. The Rattler understands this. If Hinkle’s art was too realistic, the story would simply not work. A lot of it does not seem reasonable for anything that could happen in real life.

The story is lightning-paced and is unrelenting right from the beginning. Even more compelling is that the action isn’t simply there to be unnecessarily violent. While is is true that McNamara is crafting an undeniably violent story, the violence adds up to one central idea: tragedy, which is what The Rattler is really all about. It’s heartbreaking all the way until the final panels, and it ends at exactly the right moment; I’m not sure if I could watch any more of the heartbreak unfolding out of me. Death, tragedy, chaos, violence, sadness, and longing; these are the underlying motifs of this bleak tale.

It’s worth noting that McNamara wrote this story after an event that actually occurred to him in his life. Years ago, a situation much like Catherine’s disappearance nearly happened to the author and a female friend of his. The heist didn’t work out in the attempted captor’s favor, and both McNamara and his friend were able to walk away from the situation unscathed. This is a story about what could have been; and, to me, that makes it so much more real.

Cartoon bloodshed and all.

The Rattler is violent, tragic, and illustrated in a unique and compelling way. Extremely recommended.