GLITTERBOMB is full of glitz, glamour, and guts. 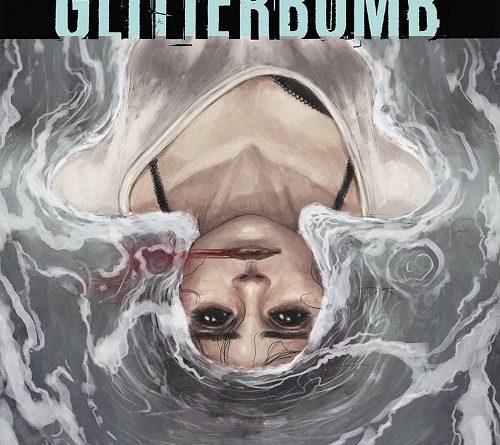 The world has had an intense love affair with Hollywood what seems like forever. The fame, fortune, love, and excitement that comes along with it; it’s like an inescapable drug for many. But it’s not a very well-kept secret that there’s an ugly side to it. One that is filled with abuse, deception, lies, and manipulation. Some thrive on this – the spectacle of ugly drama and plastic smiles – while others look on with contempt and disgust. Jim Zub is one of those who is immune to the false charm of the Hollywood moneymaking machine, and he lays it all out for everyone to see in the first volume of Glitterbomb.

The book is filled with surprises at every corner so it is best approached blindly without knowing much of the actual story. What I can tell you without feeling like I am spoiling any delicious secrets for you, however, is that it focuses on a woman named Farrah. She is a single mother with her best acting days behind her. Now in her forties, she struggles to find work in a scene that has already chewed her up and spit her out a long time ago. But underneath her defeated facade lies something special that no casting agent would be able to detect…until it’s too late.

I admire the fact that Zub has a thesis in mind with Glitterbomb and decides to stick to it without letting the story getting too convoluted. In fact, it is extremely clear in its direction and pacing, and it carries the theme perfectly throughout while also developing all of his main players. I’ve seen too many comics fall victim to trying to convey an underlying theme and letting the actual story’s quality slip by. Not here.

With nods to Alien in design, the imagery in Glitterbomb is surprisingly disturbing. Be forewarned, there’s blood. A lot of blood. Djibril Morissette-Phan’s artwork is nothing short of phenomenal here, from character designs to action sequences. This is an artist who seems to be able to do it all. Though a relative newcomer on the scene, I am extremely excited about the future of his art and hope to see it infected all throughout comic book culture.

A colorist can either make or break the overall tone of a comic, and thankfully K. Michael Russell’s color work makes all the difference in delivering an appealing piece of horror. It’s not particularly gloomy and dark in tone, and instead feels much more laid back. It’s a departure from a more traditional horror schematic which works in the book’s favor; after all, this isn’t exactly traditional horror.

This first volume collects the introductory four issues and leaves us on an open, mysterious note. Glitterbomb is now at a jumping point where it can go off in more directions than I can even count, making the reader guess about the future of the story long after reading. And that is how you know you’ve got an excellent new series on your hands.

Zub’s storytelling is complemented by some phenomenal art and colors for a very unique and horrific take on Hollywood.