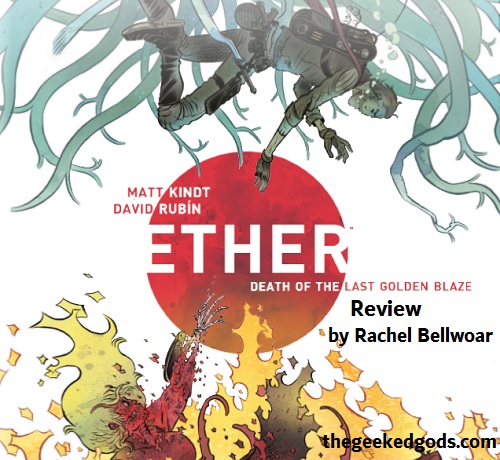 When a swimming pool is a portal to another world, and a dusty purple monkey, named Glum, is its deputy line of defense, how can you deny magic is real? Boone Dias makes it look easy in Dark Horse’s Ether, a scientist meets monkey story that has the pair teaming up to solve the murder of the Ether’s legendary hero, Blaze.

At one point Boone takes a potshot at what the Ether could be, in relation to his home planet, Earth, but it’s merely a theory. The Ether defies categorization but reading the series is easygoing. It’s creative without the pressure of heavy jargon to bog readers down and writer, Matt Kindt’s, choice to stick with dialogue, instead of an omniscient narrator, puts the characters first. You’re being bombarded with new sights and sounds, but it’s an inviting story to soak up. A snail can be a taxi cab. So can a jelly fish. It’s a place that’s not locked into rules and artist, David Rubin, is absurdly up for the task of creating this world from scratch.

The color schemes are bubbly (and, along with the use of transportation, very clear about where places stop and start), the edges rounded, and it’s not a place that’s going to hurt you, but then again, Boone is there because someone was killed. If the art is cotton candy at a carnival, the plot is a conspiracy theory about what’s going on at that carnival behind the scenes. Photo booth-like columns isolate characters’ reactions, and page layouts frequently take risks. If they take a second to unravel that’s because they’re worth your time. The one place where the rottenness of the Ether bleeds through is in recurring images of teeth – a yellow song bird whose song is sickening, an artist whose halo’s not angelic, and a mouth-shaped doorway to a room that shouldn’t be legal. 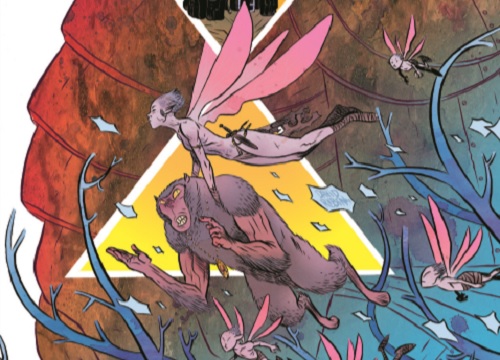 Appearing sparingly, not much is known about our antagonist, Ubel, but at the same time, there’s more than enough ammunition to hate this guy’s guts. He’s a great villain because he takes no steps to hide that he’s evil, and Rubin includes every tell to spell out to readers that they’re addressing a bad guy. His speech bubbles are unlike the other characters’, black with white lettering. His eyes are black with yellow pupils. His attire emanates green and secretes cruelty. Somehow, he’s getting away with the crimes he’s committing, but there’s never any question of his guilt. His transparency is a direct challenge.

With all this going, on you forget that Boone is from Earth until he’s sent back there. In the Ether, Boone is in control of his investigation. He’s an outsider, a scientific observer, but you wouldn’t know it from his behavior. Tourists ask questions, but Boone knows where he needs to go to find answers to his queries and instead of leaning on the local knowledge of Glum, it’s Boone who’s doing the leading. The change to seeing a life that he’s neglected on Earth is something you don’t see coming, as much as the writing’s on the wall, and maybe magic is science waiting to be discovered, but it’s the discovery of Boone’s other life that’s the most surprising.

For the chance to slip into a fantasy world that’s expansive without the weight of a thousand Houses to keep track of, Ether Volume 1 comes highly recommended. 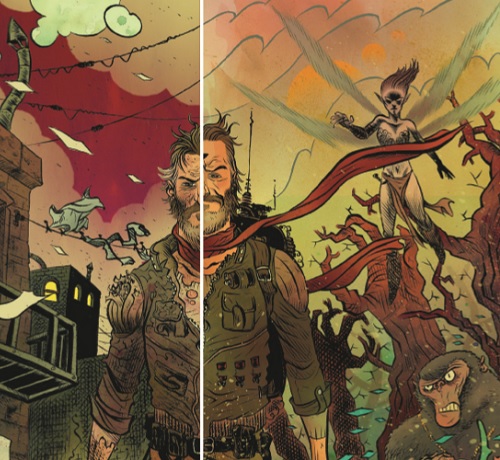