Humanity is known for its ability to adapt, and in Image Comics’ “Eclipse,” it’s no different. A solar flare has changed the world, and now the sun burns with an intense, unyielding heat. Humanity is forced underground, with only a select few forming a team of “Icemen” who wear special suits to venture into the unforgiving daylight. But when a body is found in daylight, all signs point to murder as one “Iceman,” David “Bax” Baxter, reluctantly offers to help. What follows is a sci-fi thriller and a first issue cliffhanger that turns everything upside down. 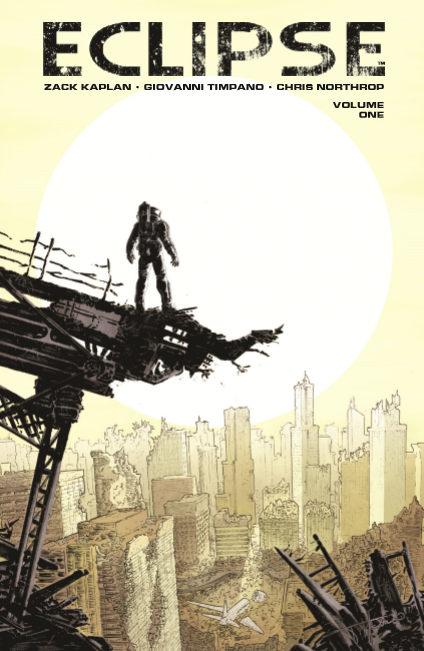 Calling it sci-fi is technically appropriate, but “Eclipse” is a classic thriller throughout. There’s not a lot of time spent on figuring out how things work; hell, it’s established in the first few pages that no one is sure why or how the sun is now so fatally potent. The story instead focuses on characters and how they survive in this weird, hellish landscape as they chase a murderer throughout the sun-soaked levels above. The world writer Zack Kaplan created is fleshed out and real, as humanity retreats to a new way of life underground. They’ve adapted to the point that it is almost indistinguishable from everyday life. Housing communities have been built, bars and restaurants line the streets and, of course, the seedy black market area is off-limits. This is a humanity that persevered and came out as close to being on top as they could. 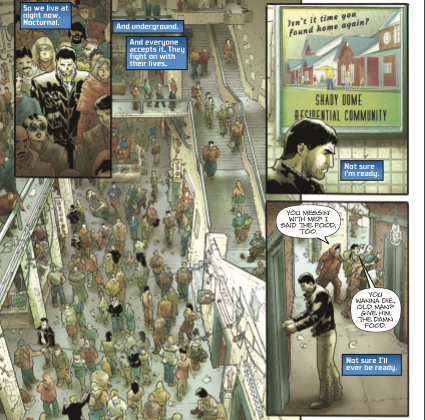 Even against insurmountable odds, the humanity of “Eclipse” perseveres.

Complementing the weird and dangerous world of “Eclipse” is Giovanni Timpano’s art. The world felt vibrant and fleshed out, pulling in the reader with every panel. The detail here is subtle, highlighting burnt and decaying bodies and creating a living world. The muted coloring of Chris Northrop drives home the barren, sun-baked wasteland of the future Earth. These all to combine to create a familiar yet alien landscape. The world is just off enough that “Eclipse” feels unnerving and strange. You’re never really sure what’s around the corner.

The creative team works to each other’s strengths brilliantly, creating a taut yet creepy world.

I enjoyed “Eclipse.” The story is fresh and unique, and there are some genuinely creepy moments, and the story sets up for something spectacular to come down the road. The copy I read is the Volume 1 trade, collecting the first four issues and in stores February 15th. “Eclipse” returns this March with its fifth issue, and I’m genuinely excited to see where this story goes next.