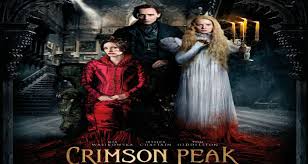 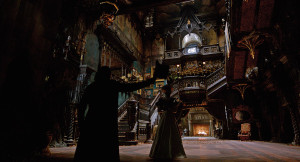 From writer and director Guillermo Del Toro comes a beautiful yet haunting atmospheric piece of gothic cinema. With beautiful set design and an obvious homage to Mario Bava, this movie stuns in both the visual and emotional aspects. Crimson Peak is a highly-stylized, well-thought out ghost story with enough heart to keep you entranced the entire two hours of its running time.

Mia Wasikowska plays Edith, the wealthy daughter of a successful businessman in New York City at the height of the industrial revolution. She is an intellectual, a writer, more specifically, and spends her time writing “love stories that have ghosts in them” instead of focusing on finding love in the real world. Her affinity for writing tales of ghosts undoubtedly comes from a ghastly apparition that came to her when she was a child; in the opening sequence, we see Edith at her mother’s funeral, and then a not-so-bad CGI visual of her mother’s ghost visiting her in her room.

In the present, an English man named Thomas Sharpe and his sister Lucille have come to town in order to get an industrial project funded by Edith’s father. But Edith’s father is not fond of Thomas; there is something sinister that he is keeping from the town. Edith and Thomas fall in love, and Edith’s father demands that Thomas leaves New York. To persuade him, he gives him all the funding that he needs, but the catch is that he has to break Edith’s heart and not return. 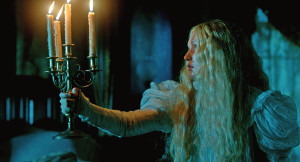 In the middle of this setup for the rest of the film, Edith is visited once again by her ghastly mother and told to “beware of Crimson Peak,” whatever Crimson Peak is, anyway. Thomas listens to the wishes of Edith’s father, and breaks Edith’s heart before pretending to board a train and leave New York; as it turns out, his sister boarded, not him, and he comes back for Edith. He then takes her to…cue foreboding music…Crimson Peak, which is a name that his English mansion has been given after the way that the snow looks after the clay from the ground seeps into it. And for the rest of the story? Well, you’ll have to watch it to find out.

In true Del Toro fashion, this film plays out like a horrific fairy tale, intentionally drenched in Mario Bava-esque visual techniques, taking extra care to employ the beautiful and tonal use of red and green lighting. If you don’t care for the story, or the acting, you must at least appreciate the gorgeous visuals of this movie. Even the wraiths that appear in the film are deliciously and demonically stylized, emphasizing on the color red, once again. While being practical effects, the CGI team must have had a field day with this movie, incorporating CGI to enhance the practical visuals. Usually, this could seriously hurt the quality and overall impact of a film. In Peak, however, it does not.

The sets are grandiose and the costumes of the period are meticulously designed. There is so much going on in this film visually that you could mute the film, replace all sounds with the music of seven babies whining for two hours, and it still wouldn’t be terrible on the merits of what you’re seeing alone. I cannot applaud Del Toro’s work enough on the set and style of Crimson Peak. 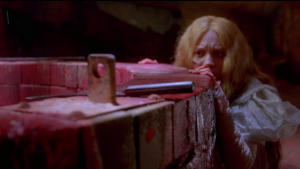 But what about the acting? Wonderful as well. Tom Hiddleston, who plays Thomas Sharpe, does an excellent and convincing job. His sister, Lucille, is menacing and strange; perfectly executed by Jessica Chastain. Mrs. Wasikowska is a perfect little porcelain doll in this film, and ambles about Crimson Peak’s monolithic walls with a curious and frightened conviction that is wonderfully portrayed.

As the story progresses and we find out more about the brooding mansion, the plot deepens, and all secrets are reveal in evil monologues which are perfectly typical for a villain in any gothic horror tale. Although it is not the most original film that has ever been made, the effort and execution of the film is astounding and I cannot laud this movie enough for what it is; a modern gothic romance. If you’re a fan of Italian Horror Maestro Mario Bava, especially films such as “Black Sabbath,” this movie will be an absolute treat to the eyes. And even if you’re not familiar with such works, or don’t care much for horror, there is a love story underneath all of the frightening visuals that, although strange, is heart wrenching and believable. 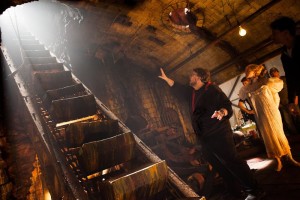 As things in the house start to come undone and the violence begins to erupt, Del Toro does it in such a way that is tasteful and not overbearing in the slightest way. There is blood, but not much. Most of the appeal in Crimson Peak comes from the story telling. It’s not a festival of gore, nor is it a “piss your pants scared” type of film. It is designed to sit right in the middle of those two types of horror film, and it is extremely effective.

I’d watch this movie twice in a row without a break if I could. Go see Crimson Peak. You will not be disappointed.