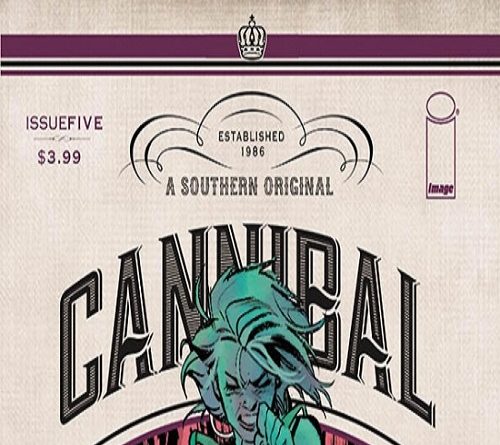 The zombie apocalypse is such a tired genre that, at this point, I’ll avoid reading most comics that deal with it. With the golden standard of The Walking Dead, the only real way to go is down. TWD has such a long list of believable characters and long-running plotlines that it makes almost every other comic book about reanimated corpses populating the earth seem…unnecessary. With that in mind, it’s surprising that Cannibal has so far been able to feel like a fresh, newly-rotting take on the genre.

Cannibal claims to not deal with the zombie apocalypse, but the anti-apocalypse. In a world overrun by a long-dormant disease that has now surfaced, the only known vaccine for it has a terrifying side effect. While the drug forces seemingly normal people to consume each other’s flesh with the reticence of a drug addict struggling to get clean, the people of a sweaty southern time just want to live their lives as if nothing is work. In their world, everything is fine. They refuse to admit that there is anything wrong and continue to go about their business as if their neighbor does not want to eat their face off. The problem is, ignoring the issue, as you may know, only makes it worse.

And plus, ignoring a rabid worldwide bout of cannibalism isn’t exactly the safest thing to do.

Five issues later, the relationship between characters still is not as strong as one would hope for them to be. The series is riding on only one central strong point – the fact that these cannibals are sentient, thinking beings, in contrast to the rambling dead that populates so many other undead apocalypse stories. While the illustration and color work is as strong as ever, the characters need to start developing into something more intricate if this story really wants to make a mark on such a bloated scene.

But this isn’t to say that Cannibal is not great – because it most certainly is. It’s simply that I feel such an idea is too strong to be pushed off as mediocrity, and character development, as we have learned from The Walking Dead, is the way to break out from “good” to “life-changing.”

Matias Bergara’s art continues to impress. setting the stage with a moody, southern gothic atmosphere. You can almost feel the humidity coming off of these pages as our main players navigate through both overgrown forests and barren jail cells alike. I am especially fond of the way he portrays character emotions, allowing us to really see the pain in these people’s faces. This is key because, once again, while many may think the gore is the most important part of an apocalypse story, it’s not – the way the characters deal with it is.

Now on the first issue of the series second arc, Cannibal needs to ramp up the tension and dig deeper with the characters within if the comic is going to make a real impression on the genre. It’s been doing a great job so far, and I think the potential is so great that a failure to do so would be nothing short of a tragedy. I’m hopeful for the future but a little cautious, all the same.