Pizza does not just grow out of the ground, ready for consumption. Ask anyone who has lived in New York for most of their life – there’s a method...
by Paul Aloisio November 23, 2016

Pizza does not just grow out of the ground, ready for consumption. Ask anyone who has lived in New York for most of their life – there’s a method to it. It’s an art, really. It’s a lot more than just having good ingredients. Yes, you need the best ones available, but it’s still entirely possible to screw up the end product by either cooking it too much, too little, or simply putting them together the wrong way.

In the case of Camp Sunshine, the ingredients are all there. Once combined, though, the end result is something just a bit less spectacular than it should have been.

Let’s get something straight. I am in no way saying that Camp Sunshine is a horrible game. It’s not. There are too many great things about it for me to say that. This is an indie game developed by Fossil Games, and it’s their first full-length endeavor. They had all the necessary tools and ideas to make an astounding game – outstanding music, a great idea, and a wealth of knowledge about the horror genre. Despite this, the game just is not fun as it should be.

So, let’s discuss this. For a game created by a team of what seems to be only three people (according to their IndieGoGo page), it’s a considerable feat that the game ended up looking the way it did. The 16-bit graphics look awesome and help to give it a serious retro vibe. The soundtrack as well works wonders for the game, and might even be the best part. Seriously. The music is so awesome that it may make you forget about Disasterpeace’s work on the highly-polarizing 2015 film It Follows. If nothing else, make sure you at least give the music a listen. There’s a great story at work here as well, and the killer’s backstory (which I will not spoil) is actually pretty disturbing and effective. The whole vibe of the game is spot-on, but, sad to say, that doesn’t fully carry over into actual gameplay.

You play as Jez, a young pixellated dude who gets dropped off at a summer camp called Camp Sunshine. Soon into the game (very soon, actually), the player finds their roommate murdered in a gory display. But who did it? All signs point to a creepy bear wielding a knife who sounds suspiciously like Freddy Krueger.

Throughout the rest of the game, you will find yourself traversing through the camp with sometimes nothing but a flashlight, being careful not to make too much noise and become a victim of the camp’s friendly murderous teddy bear named Isaac. There are times where he pops out of nowhere and runs way faster than you, killing you with one or two hits. There’s seemingly no way to figure out what’s going to set him off and it always seems to come as a big surprise when he’s on the scene, which I actually liked. A good killer doesn’t cue you in when he’s going to strike. The tension for these instances is palpable; however, after a while, the same tricks get a little old.

Camp Sunshine finds itself bogged down by doing menial tasks for other inhabitants of the camp – turning the heat on, for instance. This is a fine enough entry-level quest, but the action has already been established. Things like that tend to kill the momentum. You’ll find some puzzles which are not brain-melting in difficulty, but also never really amp up the action of the game. Fossil Games seems to have a good sense of direction. It’s just the execution of the whole package that needs a bit of tweaking.

Fossil Games seems to have a good sense of direction. It’s just the execution of the whole package that needs a bit of tweaking. For their first effort, it’s good enough. But it’s still not as great as it could have been. Regardless, I feel that the team needs to make another game and really spice it up. Maybe a bit more action, and an engine that ends up feeling more like Zelda and less like Pokemon.

For the price, you should definitely try it. There are a lot of awesome homages to the horror genre – in particular, I really got a kick out of the Lost Boys poster reference. And again, the soundtrack really is good enough to constitute at least checking this game out. There’s nothing outlandishly wrong with the game – it just needs a bit of polish. Keep at it, Fossil Games. I look forward to seeing what you put out next. 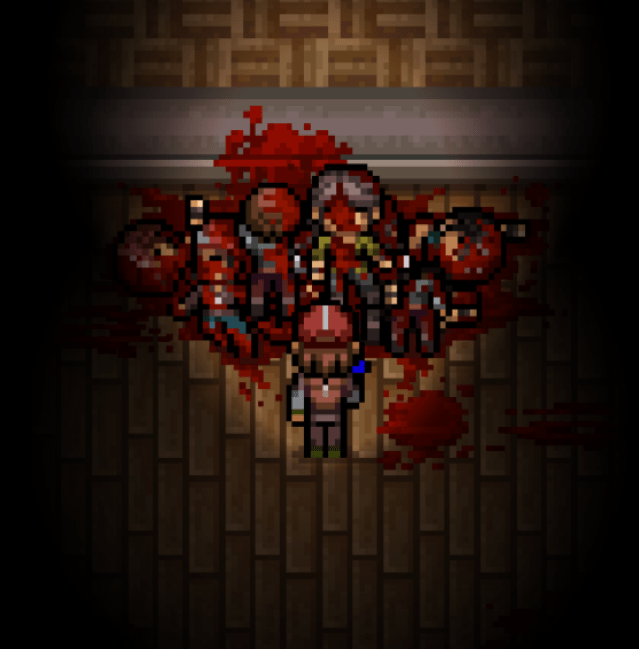