Once again, Jeff Lemire continues to impress with Black Hammer, issue #4. Or, maybe it should have been titled Black Hammer: Look Who’s Coming to Dinner. As we have gotten to know...

Once again, Jeff Lemire continues to impress with Black Hammer, issue #4. Or, maybe it should have been titled Black Hammer: Look Who’s Coming to Dinner.

As we have gotten to know this strange cast of characters, we’ve dug deeper and deeper into their psyches. Who they are – where they came from – and most importantly, how they are dealing with their newfound farm life. In this issue, Abraham Slam brings home a date, and it’s both hilarious and charming.

It’s not every day that you get to see a cast of washed up heroes and otherworldly creatures get together for a family dinner. As Abraham continues on to be more or less a hard ass, the rest of his dysfunctional family continues to push his button. And, in an unexpected but heartwarming twist, one of them really pulls through for the guy. You really just cannot help but love this group of misfits.

The flashbacks of the golden age of superheroes continue to impress and to allow a bit of action into the mundane events of Slam and company. In this issue, we get a glimpse of something truly close to my blackened heart – an H.P. Lovecraft tribute, in the form of Cthu-Lou. Dean Ormston’s art is phenomenal, and this hulking menace is brought to life in a way that feels like the golden era of comic books but with a modern twist. The flashbacks really help to bring the team’s situation to light. 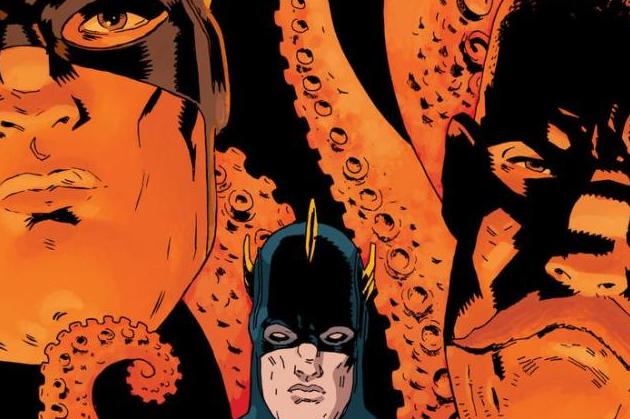 In allowing us to see into the past, Lemire shows us just what the characters are now missing out on. How do you go from fighting seemingly unstoppable creatures to living a life of boring solitude? And how much longer are they going to be able to simply grin and bear it, before one of them inevitably cracks?

Which, in all honesty, is what I am really looking forward to. Black Hammer is a comic that is centered on story first and action later – but all this restraint is pointing to something bigger eventually happening. It’s awesome to get to know all of these characters, and I feel that whenever the catastrophic happens or another certain event comes their way, we, the reader, will be all the more invested in their fates. Lemire’s writing is abnormally strong with this series and I cannot wait to see where he brings us next.

Another plus for this issue is that we are given insight into Abraham’s origins. While I actually have enjoyed his character all along, I could see why some readers may see him as the most vanilla of the bunch. After all, we have interdimensional beings and robots – who in their right mind would prefer the benign existence of an aging blue-collar man? (Besides me, but that’s not the point.) The issue starts off with a remedy for those who have been trying to find a reason to get into his character but haven’t been able to. And I know there’s some of you because there’s always that guy. So, here you go. Are you happy now? Because I am. And really, I want you to be happy too.

Black Hammer has no faults in my eyes. Jeff Lemire really has something special on his hands, and now that we are digging more into who these characters are and what makes them tick, that fact is becoming all the more apparent. It’s a superhero comic for the intellectual superhero fan, while also keeping appeal for someone who just wants to look at some beautiful artwork.

The Geeked Gods Score: 8/10. Another great issue. Pick it up immediately and join the hype train, everybody.

How Should You Watch Star Wars? Try the ‘Machete’ Order