What happens when you lock a bunch of coworkers in a building together and order them to kill? People die. Duh. Let's not think too hard about this one, friends. 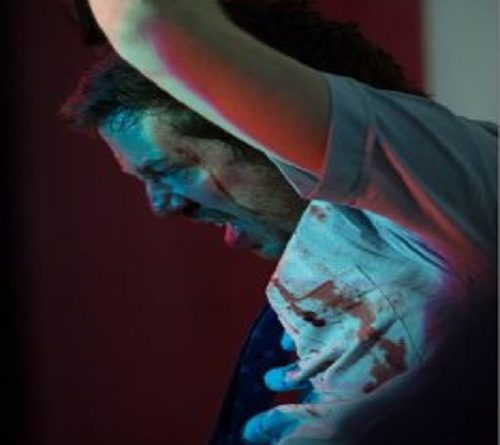 James Gunn, who wrote the screenplay for Blumhouse Tilt’s newest big screen outing, is clearly trying to make a statement. What that statement is, however, is not very clear. And I don’t mean that it’s ambiguous; I mean that there is clearly a sense of social satire, but The Belko Experiment is not entirely sure of what it is satirizing.

The film revolves around the employees of the Belko Corporation at an office in Bogota, Columbia. On an otherwise normal day at work, the building locks down and a voice booms from the fluorescent heavens, instructing the employees that they must kill each other. Friendly work relationships quickly erode and some get vicious. Others try and rationalize the situation. Some just go into hysterics. It appears as if there’s only one person in the entire building who is able to remain relatively calm and try and figure this out: Hush’s John Gallagher, Jr., who plays a man named Mike Pelk, the reluctant hero type.

There are a lot of problems with The Belko Experiment, but it’s entirely possible to ignore them and just enjoy the film as brainless fun. Which I did with devilish enthusiasm; Greg McLean, the film’s director, delivers a very exciting (and also very mean) film. It’s fast-paced, bloody, and has a fair amount of humor that greatly satisfies a need to brainless violence.

Problems arise when you attempt to think about the film too heavily or do anything besides turn off your critical thinking skills and allow yourself to enjoy buckets of blood dumped upon the screen. The first and most glaring issue is the plot. Everyone at Belko seems to be in agreement that they don’t really do anything at work. Supervisors don’t seem to care. Employees don’t even fully know what their job entails. This is all well and good except for one thing: why in the Hell would anyone take a job in Columbia if everything seemed so suspicious? This isn’t an office in New Jersey. This is an office in Columbia. Is every employee in this building really that eager to work in a cubicle overseas?

This plot point is essential for the story to work, which makes it all the more frustrating. On the day of the lockdown, only American workers are allowed to stay at work. Colombian workers are sent home. This makes it easy for the Belko Overlords to conduct a sadistic social experiment and get away with it. Yet, the fact remains: why would these people travel so far to take a job they have no passion in for absolutely no reason? Silly. Stupid. Still, it’s a means to an end.

We then have the fact that James Gunn does not seem very clear about what he is saying. When it comes to survival, humans will act like animals. Is that it? Is that blatant fact really the point? Is it the dangers of capitalism? I have no idea. It’s muddy at best.

If I was a true film critic, I would write this movie off as a steaming pile of garbage. But I’m not a film critic; I’m a fan. I’m a fan of film, yes, but you could narrow it down further and simply call me a horror fan. Knowing when to shut off your critical lens and just enjoy the ride comes with the territory. Sometimes we horror fans just want to watch people go crazy. Call it a sick fascination; call us thrill junkies. It is what it is.

Those able to do as I did will undoubtedly enjoy the film. The cast is great. Tony Goldwyn plays a real bastard and brings the intensity to the screen. John C. McGinley is a gross psycho who makes it a little too easy to hate. Michael Rooker probably plays the most likable role in the film, and it’s just a shame that his part is so short. And last but not least is both Adria Arjona and John Gallagher, Jr., who play the two mains with fervor in their respective roles.

Most of them die. They die in scary sequences. They die in gory sequences. Sometimes, they die in parts that are even a little bit funny. The point is, they die. And yes, that is truly the point here. The film’s greatest strength lies in exploding heads paired with pleasant music. It’s a trick that is tried and true, enjoyable regardless of the cliche.

Look, The Belko Experiment is not a clever film at all. It wants to be deep – it really does – but it just isn’t. Don’t think too hard and you’ll have a good time. As Bon Scott once said: If you want blood, you got it. There could be no quote more fitting, as McLean’s film is an AC/DC song in visual form. Simple and dumb yet energetic and fun.