Retro Review – Pumpkinhead (1988) The 1980’s were certainly one of the golden periods for the horror genre; It was a time of widespread commercial success, technical innovation, and... 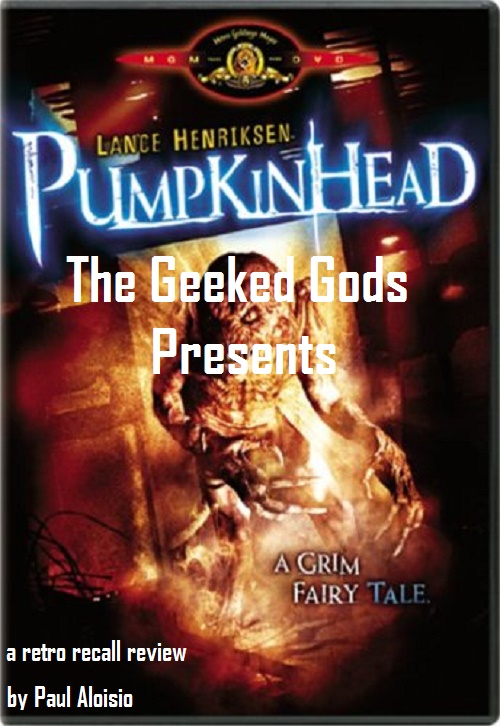 The 1980’s were certainly one of the golden periods for the horror genre; It was a time of widespread commercial success, technical innovation, and constant pushing of the envelope in terms of grittiness, gore, and imagination. It was also a time for ridiculous dialogue and overambitious (or sometimes, under-ambitious) storylines with acting so cheesy it was practically dripping. 1988’s Pumpkinhead is somewhere in the middle of the spectrum…wildly entertaining without being offensively gory or crude, but still being able to successfully conjure up the perfect amount of Halloween campiness.

The film follows a man named Ed Harley (played by an actor with possibly the coolest voice in the world, Lance Henriksen) who loses his son to a dirt bike accident from a group of teens on their way to a cabin for the weekend. Distraught, Ed takes his child to a witch in the woods, playfully named Haggis, and summons a demon of revenge to seek retribution for the death of his child. Ed quickly realizes the power of his actions and aims to stop this monster, the mythical demon named Pumpkinhead, before it makes quick work of these teens. There’s a symbiotic relationship with Ed and the demon, with Ed being tormented due to the fact that he now sees through its eye’s whenever there’s a murder.

Effects master Stan Winston made his directorial debut with this film, which undoubtedly adds to the charm. It’s not perfect, but it does have heaps of heart put into it. It’s a movie that is absolutely a product of the times, most notably due to the overacting and the very, very dated music; in the beginning of the film we are greeted by idyllic shots of a southern town, accompanied by some Disney Channel-esque country bumpkin tunes, synthesized harmonica and all. This is not to say that the film becomes a parody of itself at all, as the music, once again, simply adds to the charm of the movie and is not overly silly to the point of hilarity.

Being that the late Mr. Winston was involved with the film, it’s only natural that the creature effects are impressive. Pumpkinhead’s titular monster looks great, and although it’s not overtly terrifying, it’s an excellent looking monster. It’s a monster film more along the lines of Frankenstein (1932) than The Fly (1986) or The Thing (1982); instead of terrifying, the monster’s goal is to entertain and provide tons of fun. There will be no scenes in Pumpkinhead in which the viewer will shield their eyes from terror or to avoid a massive explosion of bloody body parts…instead, one would opt to watch the film wide-eyed with wonder and appreciation for the movement and overall design of the creature. Its appearance could be described as a Xenomorph from Alien (1979) but with the skin texture of an actual pumpkin, something that Michael Dougherty of Krampus (2015) clearly took inspiration from when he created Sam in Trick ‘r’ Treat in 2007. In Pumpkinhead’s original form, he is about the size of a small child and has almost the exact face that Sam does when his mask is taken off in Dougherty’s film, something that fans of both movies can appreciate. This quickly changes, though, as the beast grows and grows until his final form becomes a bit more demonic and humanlike, mimicking Henricksen’s facial appearances in a hellish, twisted way.

Another fun aspect of the film is that the style heavily borrows from the slasher format of the explosion of masked maniac films from the beginning of the decade, having a group of teens being picked off one by one. The twist that Pumpkinhead gives to the format is having a supernatural hulking monster perform the kills instead of a deformed human along the lines of Michael Myers of Jason Voorhees. Pumpkinhead toys with his victims in a playfully demonic manner the same way that a psychopath at a summer camp would, which makes for a very interesting character.

There’s much inspiration from director Mario Bava and the Giallo style of filmmaking at play here, but instead of using intense red, and green lights, there’s a distinct orange glow to most of the scenes. Of course, the use of blue lights do play a role in the film, especially during the highly stylized and possibly overly-spooky night scenes, where fog dominates the wonderfully dressed landscape and the moon cuts through like a knife. The scenes in which Ed travels to Haggis’ hut in the woods make excellent use of the orange colors, adding a wonderfully cheesy atmosphere to the scene.

It’d be a travesty to end this review without mentioning the performance of Henriksen in the film; he plays a man stricken by tragedy, making a terrible mistake in a fight of rage. His portrayal is one of the strongest aspects of the film, which comes as no surprise as Lance Henriksen has always been known to be a diamond in the rough even when cast in the most dreadful of movies. There’s a certain quality about his voice and general demeanor that holds an intense amount of charm and charisma. Henriksen is a cult icon, and always a welcome face in any film in which he appears in. 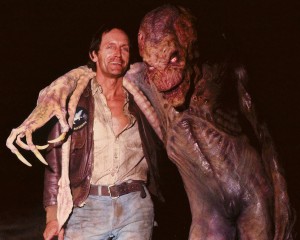 When Pumpkinhead is afoot, the wind howls and lightning is sure to strike. While not incredibly groundbreaking or life-changing, Pumpkinhead is a great way to capture the feeling of October, even on a cold February night…and as a horror fan, there’s nothing more that I could want from a monster movie. During its 90-minute runtime, Pumpkinhead will convince you that the leaves outside are starting to fall and in just a few moments, children with skull masks and witches’ hats will be ringing your doorbell, begging for treats. It’s a wonderful 1980’s creature features and should absolutely be seen at least once. 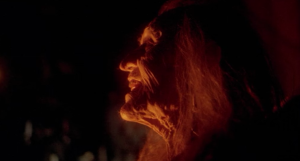