QOTSA are back with another strong effort, destined to become a favorite among fans. 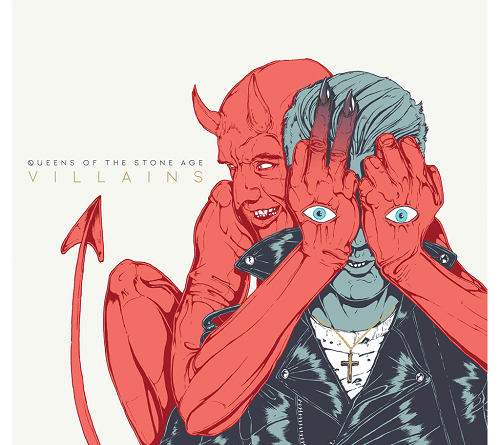 The opening measures of “Feet Don’t Fail Me”, the first track on Queens of the Stone Age’s new album Villains, introduce the album with a foreboding, otherworldly combination of drums and synthesizers. The first minute and a half appears to be building up, getting ready for things to burst into what could possibly be the heaviest album opener for QOTSA yet, and then, just when things are at their boiling point, the song goes in the complete opposite direction, trading in heaviness for a funkiness not heard in rock music since The Red Hot Chilli Peppers still wore socks on their…well, you know. Josh Homme and company have made a clear statement with the opening track. This is not going to be the album you were expecting.

The band has never been farther away from “No One Knows” than on the second track, the only misfire on the album, “The Way You Used To Do”, which has the emotional weight of a jingle in a Target commercial. But the course of the album is righted just a track later on “Domesticated Animals”, a song which really saves its strength for a powerful, catchy bridge, while using the rest of the song as leverage. Thankfully, Villains never sags to the level of the second track for the rest of the album, and it ends on a high note with “Villains of Circumstance”, which may be one of the best songs QOTSA has ever constructed. It alternates between Josh Homme’s vulnerable and solitary croon and a bombastic performance by the full band – whoever they even are at this point. Since the departure of bassist Nick Oliveri way back when, the image of the band has been Homme, whether by his own design or not.

What we have with Villains is a band unafraid to constantly evolve from album to album, something they’ve been doing since the beginning. Producer Mark Ronson’s presence is never forgotten, as the “Uptown Funk” writer has enabled the band to not be confined by the trappings of modern rock music. Instead, Villains is the product of a band simply doing whatever the f♠♥k they feel like doing, as Homme would be prone to declare himself.

And despite by disdain for “The Way You Used To Do”, it’s a respectable move by the band regardless. If this was written by any other band, it’d scream sellout. But this is not just any other band. This is Queens of the Stone Age. Since “No One Knows”, they’ve been changing the game by their own hands. As they continue to dominate the world of rock music, they can afford to take whatever chances they want – even if it means trading in Black Sabbath riffs for much more commercial pop sensibilities. It’s also worth noting the 1980’s vibe that pops up occasionally throughout the album, most prominently on the first track. Stranger Things and its soundtrack has clearly had more influence than just in film.

As someone who will always prefer the might of bands like Led Zeppelin and the aforementioned Black Sabbath over just about anything, I can’t say that Villains will be able to top …Like Clockwork for me. However, I would be lying if I said this would be the case for every listener. I feel that the band has another legendary album on their hands, and I may be in the minority in my thinking that it’s not quite their best effort yet – but damn, does it come close.

Review –Gregory and the Gargoyles