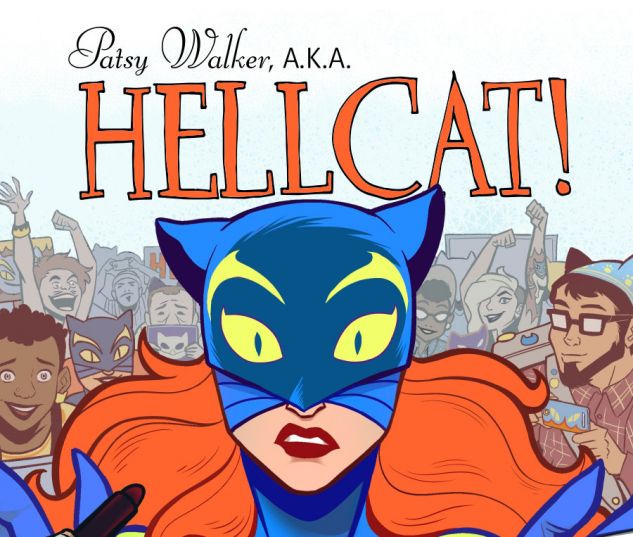 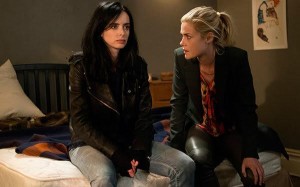 Image from Jessica Jones on Netflix

Two things drew me to the new Patsy Walker AKA HellCat! comic, Netflix Jessica Jones series and artist/writer Kate Leth. Like most readers I came to the comic expecting to fall into the gritty PTSD ridden world of the TV show, I could not have been more wrong. Leth is a spectacular artist and I’ve followed her career from comic shop employee drawing webcomics to being a full-time comic creator so I’m not sure why I was surprised with her rather fluffy take on the character of Patsy Walker. Her comics while full of authentic emotion tend to be more adorable than dramatic. 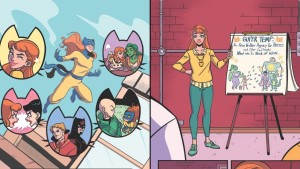 Images owned by Marvel from Patsy Walker AKA HellCat!

The comic isn’t attached to the TV show in any way that I can tell. Jessica Jones doesn’t stumble drunkenly into either the first or second issue and there’s no real indication that she ever will. While this may be upsetting to the reader who was looking to dive further into the world of the TV show the comic does stand on its own. What we have in Leth’s interpretation of the character is the softer side of Marvel. With titles like The Unbeatable Squirrel Girl being written by Ryan North and Moon Girl and Devil Dinosaur written by Amy Reeder falling into a similar vein as Patsy Walker, being light on violence, quick with the jokes and suitable for children and adults. These are the kinds of titles that Marvel is using to hook younger readers and they are great fun reads. I’ve enjoyed all of these comics, however, those of us who were expecting something grittier will probably be disappointed in this title. 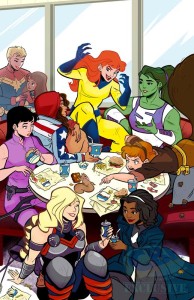 Images owned by Marvel from Patsy Walker AKA HellCat!

There’s nothing kid friendly about Jessica Jones which makes reading Leth comic kind of a shock. Patsy isn’t handling any issues that couldn’t be taken on by any other girl detective, not yet at least. The end of issue two implies a big bad is coming but it’s a slow burn. Patsy is mainly dealing with the fact that the comic books based on her teenage years are about to be re-released by her ex-best friend sans Patsy’s permission. Watching Patsy deal with the unwanted fame while trying to get a superhero business off the ground has so far been worth my dollars. It’s also great to see a comic bringing numerous female heroes together without actively drawing attention to it. One thing Leth has always been good at is drawing and writing comics with a diverse cast. This comic may not have been what I was expecting but Leth has made the character her own and she’s done a stand-up job.