Hello all Ash here @thebigat1018   We were very fortunate to get the chance to interview Joe Caramagna. Joe work at Marvel as a Writer and a Letterer (probably... 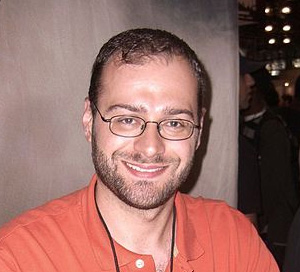 We talk about a lot of things comic related including Writing and Lettering, advice on making it in comics and lettering, the NHL, Ronald McDonald house Charities and Spider-Hyphen. 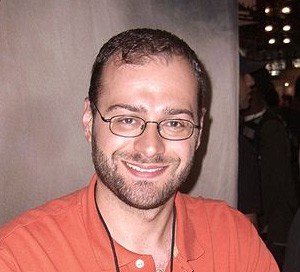 JC-My favorite part of being a writer is that you get to play make-believe. What’s more fun than that? I’ve been doing that since I was a kid playing with action figures. My favorite aspect of lettering is that it’s like a puzzle–fitting dialogue, making it flow. Obviously my biggest complaint about both is the deadlines. Those always remind you that it’s not play, and that it’s a job to be taken seriously.

GG-What is your process when writing a Marvel character ie Spider-Man vs writing/creating your own characters like the Further Travels of Wyatt Earp?

JC-Believe it or not, it’s easier for me to write the Marvel characters because I’ve been living with them my entire life. I know Peter Parker, I know Tony Stark. Wyatt Earp, while I know who he is, is new to me. It’s my own take on a real person. There have been movies and TV shows made about him, but those are all different takes on the same person, so I’m left to create my own take on Wyatt based on what I know about his life. I have to get in his head and figure out what he might have been like at that moment in time, because the stories jump in time. But once that’s done, my process is the same: throw some problems at the characters and see how they’d react.

GG-You helped bring Ultimate Spider-Man- Web Warriors form a cartoon to the comics, what is the process to bring the show to the comics and does your writing process change when writing a comic series based on a cartoon?

JC- For one thing it requires a lot of watching TV. So much that the vast majority of what I watch is the Marvel animated series because I also adapt Avengers Assemble and now Guardians of the Galaxy. For the episode adaptations I use actual art from the show, and a lot of times things don’t really translate to print because you lose the benefit of movement, and the action is directed in a way to take advantage of that movement and also sound. Because of that, and to keep the page count manageable, so much of the episode has to be cut. Plotting my own stories is easier once I have a story idea because I can change the plot here and there as needed. When working with an existing story, I have to figure out what I can and can’t use, and then figure out how to make the story still make sense. And I also do the artist’s job of telling the story visually, but I don’t have the benefit of being able to draw it, I have to use existing art. I don’t start scripting until I can flip through the pages and be able to tell what is going on without the text — that the art flows properly and clearly. Then it’s a matter of scripting the book Marvel style, trying to keep as much of the original writers’ dialogue as possible, but the truth is that very few of their actual lines get to stay word-for-word after I’ve chopped the stories up like that (sorry, guys and gals!). For my own original stories, I work full script. And that’s how I prefer to work.

GG-How did the Further Travels of Wyatt Earp come about? Is there any pressure writing about such an iconic person in history? Do you think Wyatt Earp fixed the Fitzsimmons-Sharkey fight?

JC-Ha! It’s very possible he fixed the Sharkey-Fitzsimmons fight but in our story, we come up with a different scenario that you can read about in Chapter Two! And I don’t really feel any pressure when writing Earp or even the Marvel characters, because I’m really writing for an audience of one–me–and whether or not anyone else likes my stories is up to them and out of my hands. I don’t really read reviews or anything like that. And if Wyatt isn’t happy with the way he’s portrayed, he’s not going to say anything about it! He’s been dead for almost a hundred years! 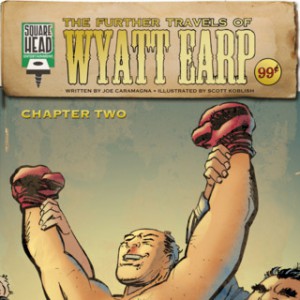 The story came about after I watched the movie Tombstone for the fourth or fifth time and I noticed at the end it said that Wyatt Earp died in Los Angeles in 1928. It clicked in my head that he was 80 years old when he died, and he was only about 30 years old when The Gunfight At The OK Corral happened, so what was he doing for fifty years? And 1928 was in Hollywood’s Golden Age, what was he doing there? So I did some digging and found out that he spent those fifty years traveling from place to place and getting into all kinds of trouble.

GG-What is your favorite comic that you have written, lettered and inked? Are there any comics that you disliked or wish you took your name off after they came out?

JC-The ONLY comic I’ve ever written, lettered, AND inked is a graphic novel I published in 2006 with my buddy Dennis Budd called “Model Operandi.” Dennis penciled and colored it. I’m not sure I could pick a particular favorite in each category, but I’m very proud of having written a bunch of Avengers stories with legendary artist Ron Lim that are now being printed as “Avengers Vs,” “Avengers Vs. Infinity,” and Marvel’s Halloween Comicfest comic. I also just wrapped what is probably the highlight of my lettering career, which is the work I did with Mark Waid, Chris Samnee, Matt Wilson, Paolo Rivera, Marcos Martin, Javier Rodriguez and some of my favorite Marvel editors on Daredevil.

GG-How are the Fonts and Balloon Styles selected for Marvel Books?  What is your font style and preference?

JC-I work for Virtual Calligraphy–Chris Eliopoulos’ lettering studio–with Cory Petit, Clayton Cowles, Joe Sabino, and Travis Lanham. All of the fonts we use at VC were created by Chris and are exclusive to VC. When I’m assigned to a book, I look through the art and select a font, or fonts, from VC’s font library that I think works well with the style. I don’t really have a preference; whatever looks good is a-okay by me. And don’t get me started on balloon styles! Anything other than a standard white balloon makes my skin crawl!

JC-The name’s trademarked with a hyphen and is worth a bazillion dollars. I don’t think we’ll have to worry about that, haha.

GG-What are some of your favorite books comic or otherwise for 2015? How do you feel about the Marvel comic universe being destroyed and reset in Secret Wars?

JC-My favorite comic titles of the past year and change have been Daredevil, Ms. Marvel, and Captain Marvel. Marvel’s Star Wars books have been great, too. I haven’t had much time to read anything but comics for the past few years, but when I do, I usually read nonfiction. As far as the post-Secret Wars Marvel Universe, it’s not so much a reset as it is a jump in time. The stories themselves are a natural continuation of what was happening before Secret Wars, but a few months later. I really like a lot of the new titles, and there are more announcements still to come.

GG-Any advice for people trying to get into the comic business, Is their one thing people shouldn’t do to try and get their foot in the door? Are their things people should be doing but don’t?

JC-The best advice I can give is to not sit around and wait for someone to hire you, you have to make your own comics. No one is going to hire you to make comics if you haven’t shown them that you can make comics. Don’t stop improving, don’t stop trying, and don’t stop believing in yourself. If you are good enough, eventually someone will hire you to do something. And if you can, intern for a comic book publisher. It’s the best education in comics you’ll ever get, and you’ll make great contacts.

GG-Any Advice for people trying to improve their Lettering, How can writers aid the letterers?

JC-What I’ve been telling young letterers to do is scan a page of a well-lettered comic at normal print size, place it in Adobe Illustrator, and trace over the text and word balloons with your own lettering. You’ll get a good idea of what size font to use, balloon shapes, the proper spacing between the letters and the edges of the balloon, etc. Keep doing that, and you’ll find those good habits in your own work, and after you nail the fundamentals, you can start trying out different ways of doing things.

GG-You have worked with the Charity Ronald McDonald House of New Jersey and taken part in a charity auction for St. Barnabas hospital. Why do you support these charities and is their anywhere fan can go to help these charities out?

JC- I published a blog entry on my website, www.squareheadentertainment.com, that explains why the Ronald McDonald House Charities means so much to me. My oldest daughter suffered from some serious health complications when she was born, and my wife and I practically lived at the hospital for almost a month. We were very fortunate that we lived close enough to the hospital to commute every day, and didn’t have to worry about work and paying our bills because we knew we’d have the support of our parents, but many people aren’t that fortunate. Sometimes the hospital that provides the best care for your kid is nowhere near where you live. The Ronald McDonald House provides a home away from home for those families so they can be together and not have to worry about paying for temporary housing or groceries. Each house is funded entirely by donations, so the best thing you can do is to contact your local House and ask what items they need, whether it’s diapers, laundry detergent, snack foods or whatever. If you’d like to help my local House—The Ronald McDonald House of Long Branch, NJ—I worked with the House Manager to create an Amazon wishlist that you can find here:

All donations are delivered right to their door.

GG-Since you are a Hockey Lover (Devils Fan?) as am I Go Rangers and Habs (Canadiens)-Who are you rooting for and what teams do you think are going to surprise this year?  How do you think the Devils will do this year?

JC-I like to say that I have three loves in my life: my family, Spider-Man, and the New Jersey Devils. Not always in that order, haha. Unfortunately the Devils will most likely be terrible this year because they’re going for a full reboot with a new GM, new coach, and a young lineup, but I think the Calgary Flames are going to surprise some people. They had a good year last year, but a lot of people think they overachieved and are gonna take a step back, but they got better in the offseason and might have the best defense corps in the league. I think the Maple Leafs are going to be better than most people think too. Probably not a playoff team, but they’ll compete. 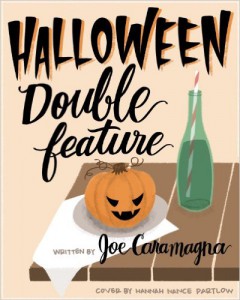