The original mini-run of Old Man Logan was, as I’ve already described, more or less a missed opportunity. The sequel, on the other hand, is an exercise in the bizarre. No longer is Logan a neutered, broken man; his rage is deeper than ever. With this second coming of the older Wolverine, we see a brutal Western Cowboy-type out for blood. And it’s awesome.

As much as I felt that the original miniseries was lacking, it was necessary for the success of this plot progression. If you haven’t read the original, stop reading this right now and don’t come back until you’ve finished it. Okay? Good. Are you sure you want to continue? Last warning! 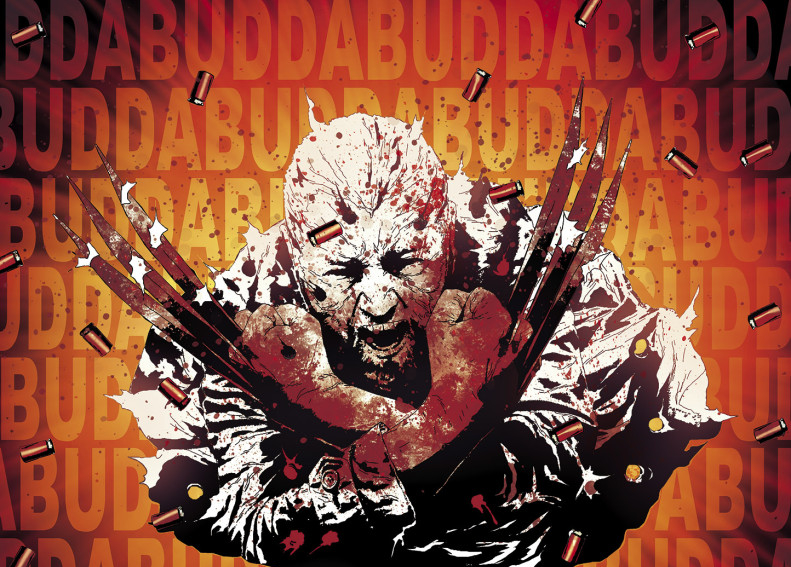 When Logan finally popped his claws and went on his rampage at the end of the first run, it was like an unbridled beast finally being let out of his cage. His built up anger and sadness exploded into a flurry of madness, spelling death for anyone unlucky enough to cross his path. Now, the reader can dig deeper into his personal hell. He’s given up the pacifism in favor of acting as a deadly upholder of justice, wandering the wastes and picking up the trash wherever possible. The first issue starts out normal enough – one could expect the rest of the arc to continue on this path and would be more than happy to wander along with Logan. Instead, it just gets insane.
Logan finds the head of an Ultron and sets off exploring. After climbing over a wall that he should have never been at in the first place, he begins to be transported back and forth so many times throughout the rest of this five-issue miniseries that it’ll make your head spin. Truth be told, the story, despite all the things going on, seems almost negligible. The art is so bombastic and intense that it overpowers anything that is going on in this strange and fantastic tale; I stopped questioning why and instead tried to just focus on the what – as in, I don’t care what the hell is going on here, I just know that it’s weird, and I like it. I need to reiterate: Andrea Sorrentino’s art here is phenomenal. It explodes off of the page and sucks you in with a near-gravitational pull. Without art this intense, this comic would have gone down like an adamantium zeppelin. (You like that one? Clever, right? No? I tried.)

More than anything, this miniseries seems to serve as a way to bring in a new beginning for the Marvel Universe. Essentially, through the concept of time not being a linear thing, Marvel can reboot itself and keep things either interesting or insanely convoluted to the point of ridiculousness, depending on the way you see it. Old Man Logan gets way ahead of itself with the crazy plot, but it becomes so out there that I ended up greatly enjoying it. Traveling through time and space can be a fun thing, it turns out.
Along the way, we can see appearances from almost every Marvel hero you could think of. Much to my surprise, there’s even a world entirely populated by Iron Men! There’s a symbiote Hell and more – but spoiling it won’t do you any good. You should absolutely read this series. It’s not for everyone, and if you can’t appreciate comics that go entirely off the deep end and venture into areas that don’t make much sense, you won’t have a good time. For anyone who is ready for a strange adventure, dig in.

The plot is super confusing and strange – but it’s so crazy that it turns into something both addicting and fantastic.