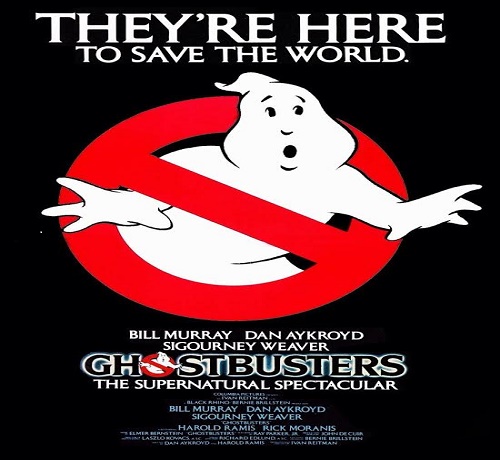 The masses voted on what movie I should review next and I was delighted that y’all chose the original Ghostbusters. Perfect timing, since the remake has just come out.

And imagine my delight when I watched this movie and found that it is NOT a Christmas movie!!!! Let us all rejoice!

What I already knew: Bill Murray and friends use backpack gun things to shoot ghosts down. And somehow a giant Stay Puft marshmallow man makes an appearance. Oh, and I know the “Who Ya Gonna Call” song!

You know what’s weird about Murray’s character? He really doesn’t believe in ghosts before his team’s first encounter at the library. He’s clearly lazy, happily hitting on chicks and making money without actually working. And yet, Murray is the leader of the group. I totally understand that it’s because he’s the one with the people skills, but blergh….

I mean, just look at this kiss. It is the most awkward, forced weirdness ever.

I’ve got it! Maybe he should have saved the group some money and worked as the receptionist. He’d be great charming clients and staying out of the field where the actual experts just trip over him.

Plus, with Murray out of the field, maybe we’d learn about about these “ghosts”. Because I’m not convinced they’re actually ghosts. After all, Aren’t ghosts supposed to be the spirits of a dead person? These “ghosts” are closer to alien monsters…that would explain the world domination AND why the green one likes pigging out on food. Because normally ghosts shouldn’t be able to eat, ya know?

And then the angry dog ghosts show up and everything just becomes confusing again. Is the glutonous green ghost even the same species at the stone dog ghosts?

Now, if you want to label these creatures as demons or some other malevolent supernatural being, I think I could accept that. That just explains the whole situation way better than “ghost” does. Although “Demon Busters” might not have the same ring to it…

At least the movie is a comedy, right? Personally, I only laughed at a few moments, but all the plot holes and flimsy world building would be even MORE annoying otherwise. I can forgive it for not being that funny and am just grateful that the movie isn’t asking to be taken seriously!

So final verdict: Ghostbusters was mostly meh for me. It just reeks of 80s cheese (the worst decade ever as far as I’m concerned). I didn’t want to rant about how objectified Sigourney Weaver’s character is, but I’ll just summarize here to say that any time she was on screen, I cringed at the role written for her. I’ll admit that I’m rather optimistic about the new Ghostbusters because I think a remake could actually freshen up the story…or it might rely too heavily on copycatting the original and just feel gimmicky. I guess there’s only one way for me to find out…