I recently watched Honey I Shrunk the Kids, mostly because I wanted a movie I didn’t have to pay attention too, but with the new Ghostbusters, I wondered what the heck happened to Rick Moranis. (I’ll get into where Rick is a little later on.) For now, let’s take a look at how Honey I Shrunk the Kids is still relevant and also outdated. Right off the bat, it starts with an animated scene with the credits and billing displayed. Nowadays a lot of films like to get right into the action and leave the credits at the end. If you can ignore the fact the animation looks like it’s from the 80’s, then the scene is mildly entertaining and divulges just a bit too much of the plot.

For those who don’t already know, Honey I Shrunk the Kids is a movie about a scientist Wayne 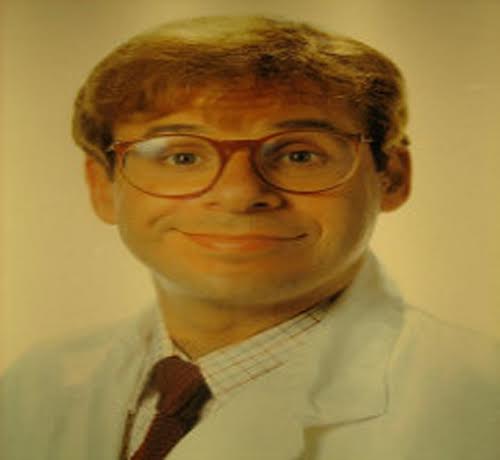 Szalinski(Rick Moranis) who is working on a shrink ray in his attic (Because safety regulations weren’t a thing back then and no way could something go wrong). Guess what though? Something does go wrong, and the kids shrink gasp. The whole problem starts when the neighbor’s kid hits a baseball into the attic starting the machine up and fixing it (Rick couldn’t get it to work for five years prior). The ray shrinks the kids, and now we get into the real fun. I will say that the graphics are pretty solid for most of the scenes. You’re never truly brought out of the experience because of poor graphics. The plot thickens, Rick comes home, destroys his machine, and sweeps the debris and the kids up and throws them out on the curb.

The movie is flawed scientifically but makes up for that in humor, with more sexual tension than I had 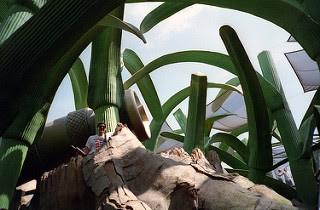 remembered. When Russ saves Amy from drowning with mouth to mouth Amy’s little brother asks how he Russ knew CPR. He responds with “That’s why I took French class”….(pause for laughter). Well if that doesn’t tickle your tummy, you’ll laugh from Rick Moranis and his antics as once he’s figured out they’ve been shrunk. Between using crutches as stilts, riding the clothesline and creating a balancing device to avoid touching the lawn, he’s pretty ingenious.

When the mother comes home from work, the kids haven’t been heard from in a few hours and realizing she has no idea where they are. She says, “I’m sure it’s nothing to worry about.” (I don’t know about most of you, but my family freaks out if I don’t check in on Foursquare every few hours). They didn’t have cell phones; they couldn’t text, or be low-jacked, their mother couldn’t call them and ask 20 questions about where they were. The 80’s, they were the best of times, they were the worst of times, they were definitely cheaper times. We discover that the neighbors are supposed to go camping, but because the kids are missing decide to skip out and forgo their deposit on the cabin for the weekend. The deposit is $80, and a dual income family was legitimately concerned about wasting all that money on the deposit. I’m pretty sure I’ve had more expensive nights just drinking at a bar or going to the movies.

For the record, I was waiting a long time for the movie to say, “Honey I Shrunk the Kids!” Guess what? It happens at the one hour and 50-second mark. When it was said, I made such a noise my mom panicked. Eight minutes and 10 seconds later, Rick realizes that even if he finds the kids he has to fix and reverse the machine. You know, the one that took him five years to not work and now he only has 20 minutes of a movie to figure out and reverse it. Outside of that though it should be a piece of cake, right?

Unfortunately, the parents can’t find the kids in the yard, why because that would be too easy. Instead, the kids make it into the house on the fur of the dog because the dog’s ears are so good it can hear the kids. Rick Moranis almost eats his son because he ended up in the Cheerios he was having for breakfast.

Although he shrunk his kids, he was casually eating cereal. Luckily the dog saves the day and bites, Rick, before he eats his son. So the award for Best Dad Who Didn’t Eat His Son goes to Rick Moranis as Wayne Szalinski.

I give this movie a solid 7/10 on the ‘does it hold up’ scale and a 9/10 on the ‘nostalgia’ scale just because of those awesome scenes in the grass from when I was a kid, but now look a little outdated. The film is part of a trilogy, so at some point, I’ll watch the rest if there is a demand for it. 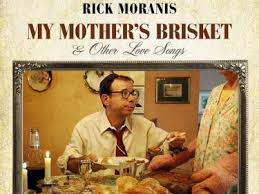 I had promised more to come about Rick Moranis, Ghostbusters and how it ties in. Well, in the late 90’s Rick Moranis disappeared from acting and being the loveable nerdy dad we see him as, even as Dark Helmet in Spaceballs. He went to be a dad in real life to his two children and take care of his ill wife. I believe this made him somewhat cynical, and that is why he was the Toy Taker (GASP) in Rudolph and the Island of Misfit Toys. He pursued voice acting having a role in the Disney movie Brother Bear with his last acting credit in 2007. In an interview with ‘The Hollywood Reporter’ last year, Moranis said he would return to acting if the right part came along. Now that his kids are all grown he feels he’d be ready to get on screen again. When asked why he was not joining the cast of the new Ghostbusters, he responded with “Why would I do just one day of shooting on something I did 30 years ago?” I don’t know Rick, maybe because it would give us all joy to see your face and how you’re doing! He had released a comedy album in 2013 called My Mothers Brisket. Picture a bit of a folky sound from a Canadian with Jewish heritage and more twang than Bob’s your Uncle. You can find his music and get updates from Rick here http://www.rickmoranis.com/. Hope that reading all of this brings out some nostalgia for you like it did me. Now let’s bring Rick Moranis back!