Nightwing: The New Order #1 Review By John Saavedra   DC has published no shortage of grim alternate future stories set in Gotham, but for once it’s not a...
by John Saavedra August 23, 2017 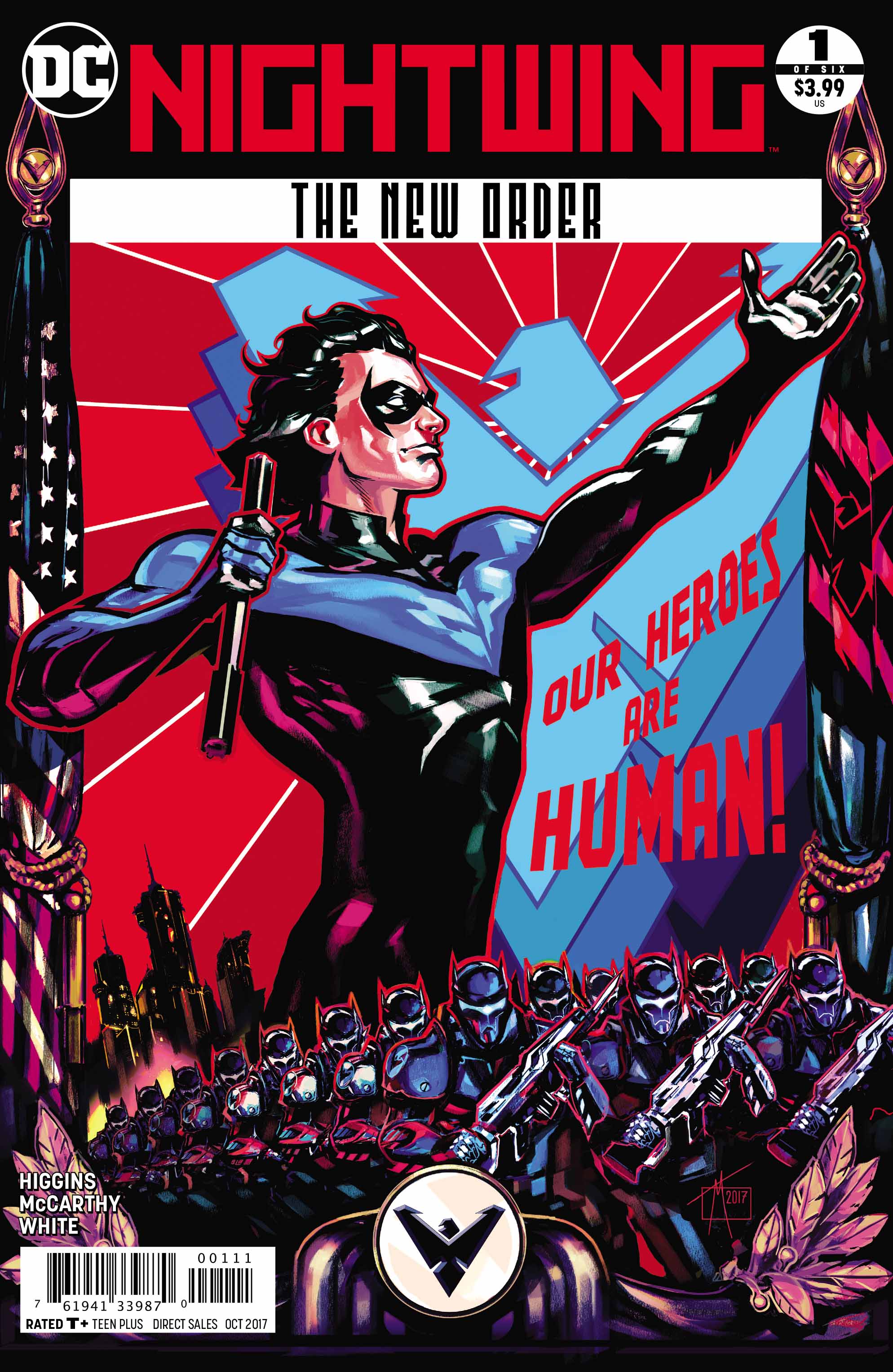 DC has published no shortage of grim alternate future stories set in Gotham, but for once it’s not a fascist Batman laying down the law and branding criminals. Instead, it’s the original Boy Wonder, Dick Grayson, who leads this “brave new world” that’s free of weapons and superpowers. Kyle Higgins, who had quite a long run with Nightwing back in the New 52 era, returns to the character for a decidedly different take. 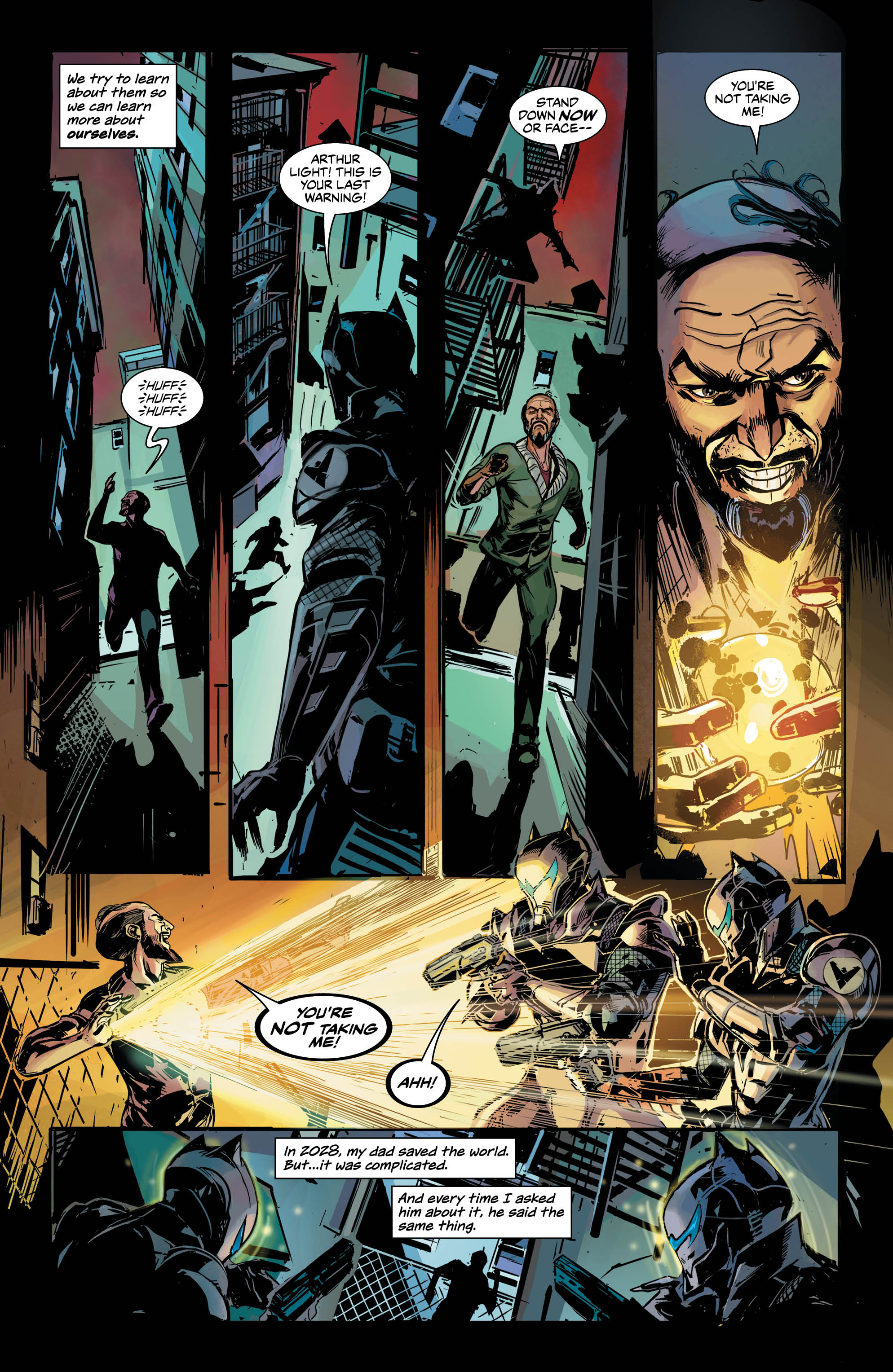 I was pretty surprised by how little Dick had changed in the first issue despite the fact that he works for a tyrannical government that has outlawed superpowers and will use questionable methods against those remaining metahumans who disobey. Dick is the face of this anti-superhero movement, but he doesn’t seem evil or power hungry. Higgins presents someone much more complex than that. Dick believes that the things he’s done, the future he’s helped shepherd, are for the good of the planet. 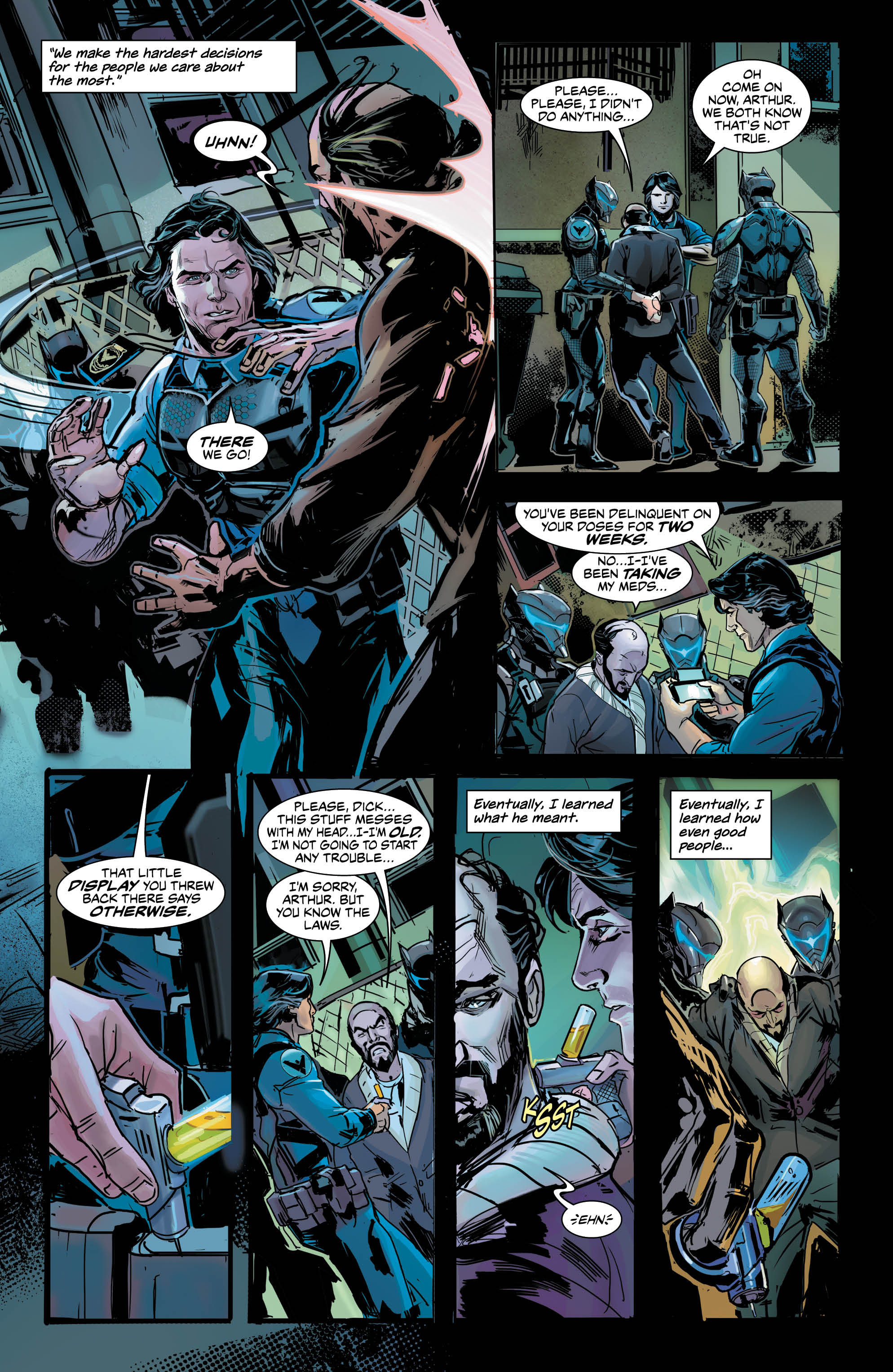 Judging from the first issue alone, it’ll be pretty hard to hate the former Boy Wonder, and that’s to Higgins’ credit. He understands this character well and is able to deliver a determined Dick Grayson who still seems pure at heart, dutiful, and kind. How he got to the point where he felt that he had to betray his friends and take down all of the metahumans will undoubtedly be the big mystery of the miniseries.

By the time Nightwing: The New Order, Dick has moved on from his superhero persona. Instead, he goes by his real name and is lauded as a hero who saved and brought order to the world. In fact, he’s pretty famous and even signs an autograph at one point. No one hates the dude at all — except those he inadvertently oppresses in the book. He’s the commanding officer of an elite task force known as the Crusaders, who police the remaining metahumans, but even in that role Dick remains a grinning presence instead of a brutal one. 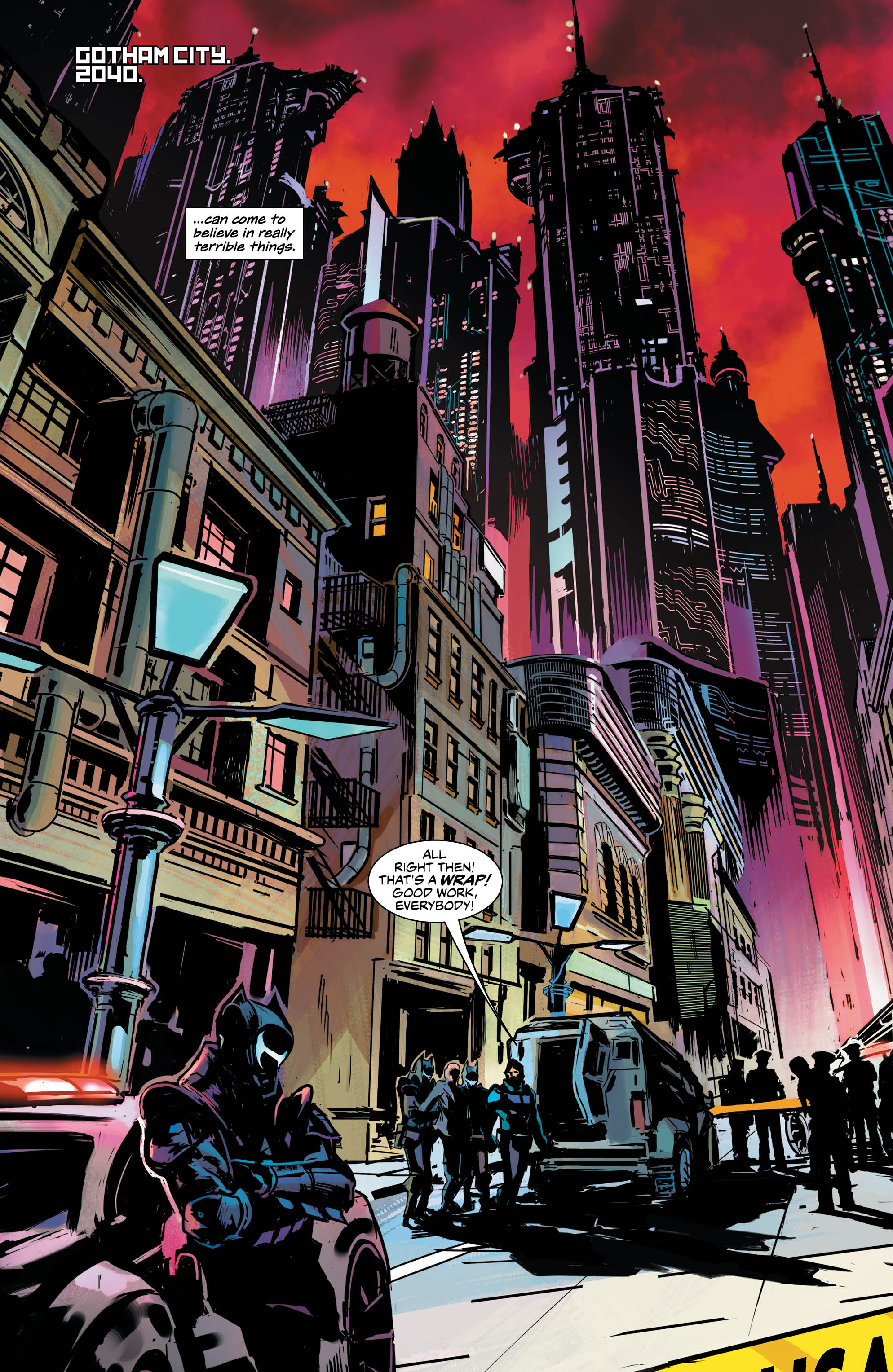 Dick also has some family issues going on at home that will surprise readers. A couple of familiar characters show up in Dick’s personal life, but don’t expect any sign of his pointy-eared mentor, who doesn’t show up in the entire issue. There are hints that some kind of resistance is being mounted against Dick’s new world order, but we don’t get to see much of that. Instead, Higgins spends most of the issue presenting this shocking future that is at once familiar — we’ve seen this sort of anti-hero sentiment in books like The Dark Knight Returns and X-Men: Days of Future Past — but also really foreign and conflicting. Why? Because the bad guy doesn’t seem so bad.

Trevor McCarthy and Dean White team up for some pretty interesting panel work. I like the way the issue flows visually and how White uses colors to add emotion to the art. There’s an almost retro sensibility to McCarthy’s pencils, especially in the way he draws the bushy-haired protagonist, who looks like he’s been ripped right of the 90s. The book looks great. 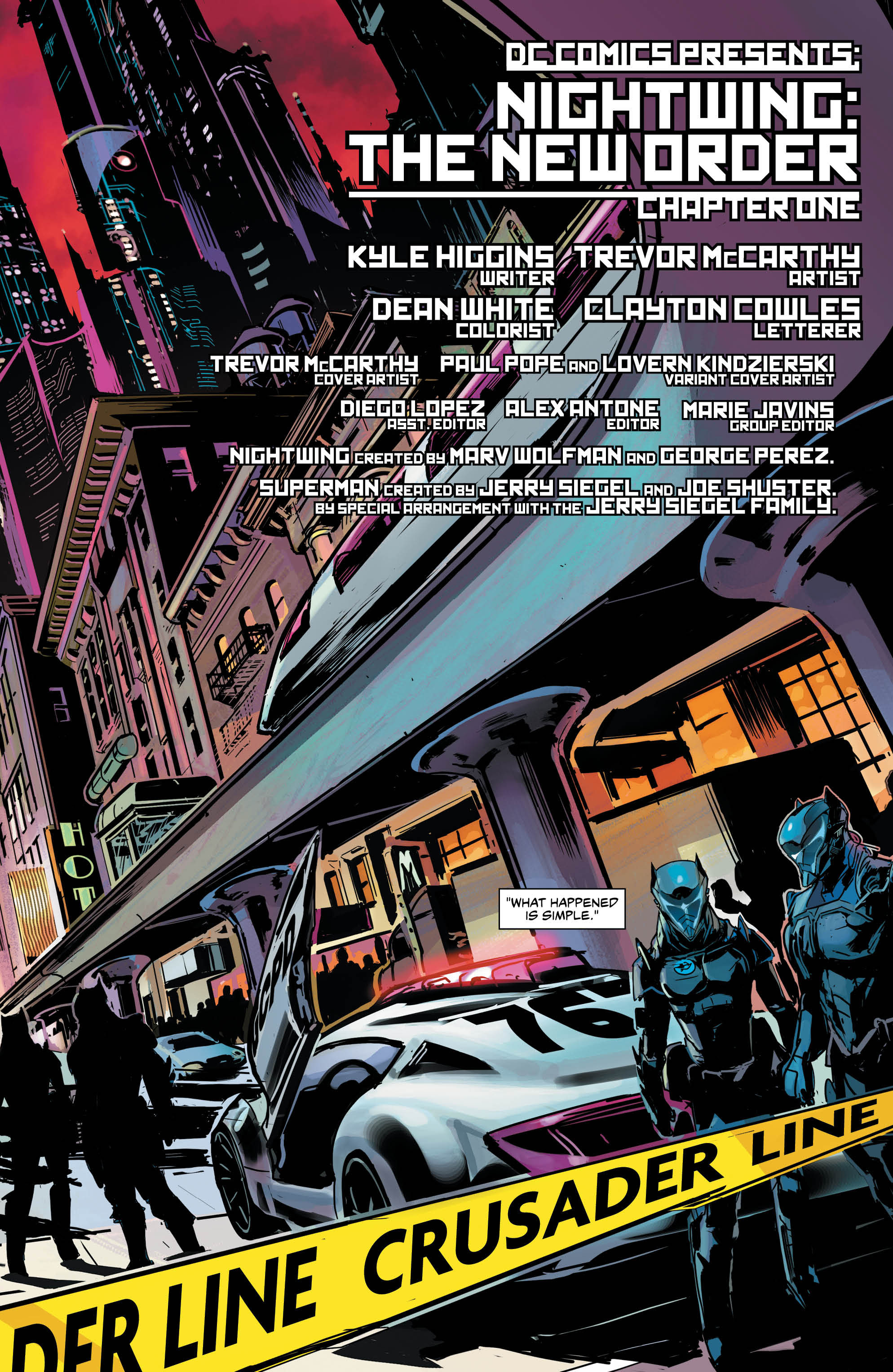