Night of the Creeps, starring the ever-masculine Tom Atkins, has more quotable moments than possibly any ’80s movie ever. In fact, there are parts of me that think Fred Dekker...
by Paul Aloisio February 28, 2017

Night of the Creeps, starring the ever-masculine Tom Atkins, has more quotable moments than possibly any ’80s movie ever. In fact, there are parts of me that think Fred Dekker wrote this movie simply to give Atkins an overload of one-liners. And in doing so, the phrase “Thrill me” will never fail to conjure up images up space slugs, flamethrowers, exploding heads, and severed body parts for any true fan of 1980’s cornball horror. 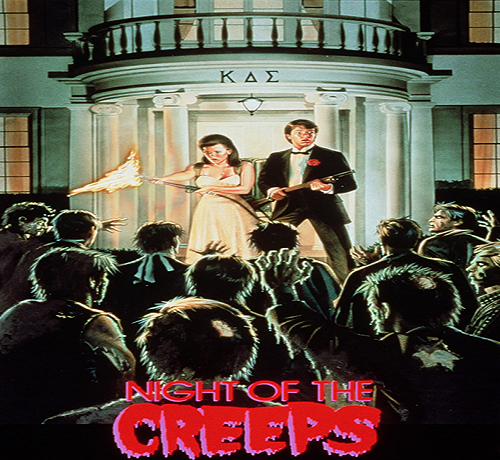 In what may be the ultimate nostalgia bomb, Creeps is a movie that simultaneously captures the feel of the feel of a 1950’s science fiction film and an early zombie film while over time providing us with the tone of a John Hughes movie gone horribly violent and wrong. Add a healthy dose of Atkin’s ’80s power on top, and you’ve got one of the most unique films to come out of the decade. Are there scarier films? Sure. Gorier? Of course. As quotable and instantly recognizable? That’s up for debate. 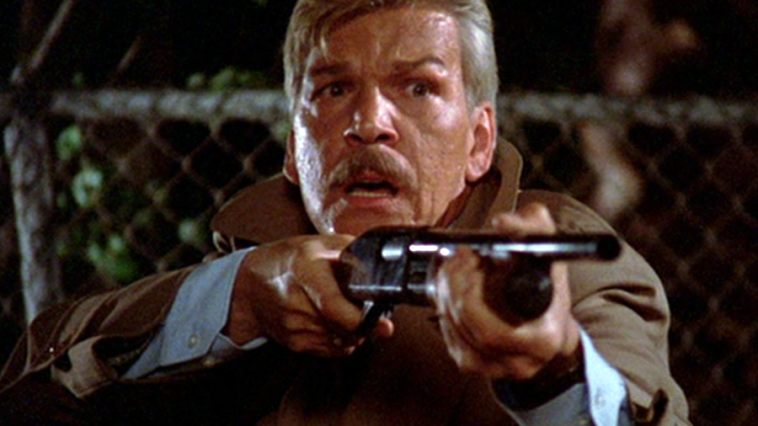 Fred Dekker serves as writer and director in this hilarious and bloody film, conjuring up a story about space slugs that becomes both irresistibly hilarious and frightening in execution. Chris Romero (Jason Lively) and J.C. Hooper (Steve Marshall) and two college weirdos who attempt to join a fraternity in order to score. Things take a turn for the strange very quickly when they trespass into the college’s medical facility and find a frozen body – a young man who had swallowed a space slug and gone on a murderous rampage over twenty years ago. Soon, a college-wide infestation of the slugs is turning frat brothers into murderous zombies. But if Detective Ray Cameron (Atkins) has anything to do with it, their rampage will soon be over. Flamethrowers. Gore. Moustaches. Aliens. Chicks. And those one-liners. What more do you need?

Well, how about naming all of the characters after influential horror directors? No, it’s not a coincidence that the character’s last names consist of Hooper, Romero, Cronenberg, Raimi, Cameron and Landis. Yeah, that should do it.

But the nostalgia aspects and the nods to horror favorites wouldn’t be enough to save the film if it wasn’t actually entertaining. Thankfully, Night of the Creeps absolutely is. It’s funny; really funny. There’s a sense of silliness that I pine for when watching many films from this decade. Just look at some of the period’s greatest – The Texas Chainsaw Massacre 2, Evil Dead 2, Fright Night, Re-Animator. All of these movies coupled blood and legitimate scares with the feeling that movies could still be fun. While films as grim and terrifying as Hellraiser would also be remembered as genre legends, both styles of horror have their place. However, while many filmmakers are still going in the direction of Hellraiser – gory, violent, humorless – films that try and scare you while having fun with it just as Creeps seem like a long-forgotten art. Horror comedies do still exist, but they’re hardly in the same realm.

This truly is Atkins at his best. I’ve already went into details about his underappreciated role in Halloween III, and though his characters are similar in the two films, Detective Cameron is much more of a caricature of a veteran detective in Dekker’s film. He’s brash and aggravated; he drinks and smokes a lot. He’s seen stuff – too much stuff – and full of witty things to say. In what other movie are you able to find lines such as:

“I got good news and bad news, girls. The good news is your dates are here…The bad news is they’re dead.”

Though I’ve already spent a long time going into detail about my admiration for Atkin’s performance, he certainly wasn’t the only one bringing his A-game. Lively and Marshall bring a convincing (yet quirky) sense of friendship to the screen – remember that whole John Hughes factor I was talking about before? Marshall plays a kid who just wants the best for his buddy, and that means helping his best friend get the girl. And so what if it ends up with slugs that take over your brain and turn you into a maniac. Chalk it up to collateral damage?

Like most cult classics, Night of the Creeps wasn’t very revered upon its release. This is a common theme with silly movies from the decade. It seems that at the time of their original run, the humor just doesn’t click. It is only after audiences marinate with them for years that they come to be appreciated for what they are: gold. Pure horror gold.

Will we look back at the horror comedies of today with the same kind of reverence that we do for Dekker’s film? Something tells me that, for the most part, we won’t. But I certainly am up for the challenge.

As Cameron would say, “Thrill me.”

Oh, and because this is the 1980’s, Dick Miller makes an appearance. Seriously – is there anything this movie doesn’t have?

Animosity Vol 1- Who is running the asylum a review