There’s money in familiarity. In order to keep readers coming back for more, comic books tend to maintain the same basic status quo for characters for years, only making...
by Former Writers July 12, 2017 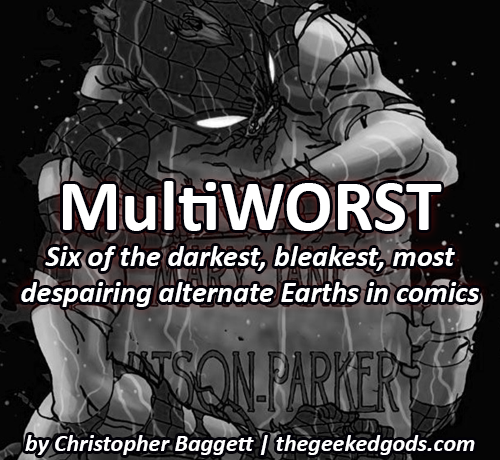 There’s money in familiarity. In order to keep readers coming back for more, comic books tend to maintain the same basic status quo for characters for years, only making changes incredibly gradually or as part of a large event. This day and age, this is even more true as companies try to make their comics resemble their movie and television counterparts as much as possible, so as to convert movie fans into regularly buying readers.

But every writer has that one story, that weird, wacky, crazy story that no publisher would ever allow to become canon. For comic publishers, this is where they find their other mainstay source of readers: alternate universes. By setting the story on another world, they have free reign to do whatever they want with the characters, and the end result can be shocking. We’ve compiled six of the most shocking, violent, dour, and despair-filled multiverses for your enjoyment, so enjoy this crash course into the worst alternate universes you could live on.

One of the more popular Elseworlds tales, Red Rain actually warranted a trilogy of stories. It features a Gotham upended by the sudden appearance of Dracula. Bitten by the vampire, Batman slowly loses his humanity over the course of the story until he’s finally transformed into a full-fledged vampire and the world at large believes Bruce Wayne is dead.

Red Rain was incredibly well-received, despite it’s tale of a bleak and unforgiving Gotham City. The story was so popular it was revisited years later during Countdown’s Search for Ray Palmer mini-series, but things weren’t much better: Dick Grayson had become a vampire hunter, but by story’s end was turned into a vampire himself, as a vampiric Batman and Robin scour the night sky. 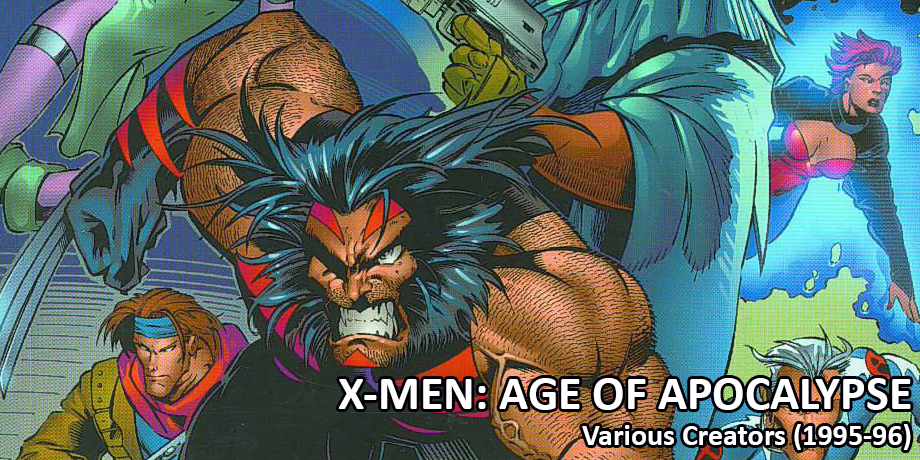 Released in 1995, Age of Apocalypse saw the insane mutant Legion travel back in time to kill Magneto but accidentally kill Professor X instead. With Xavier dead, the timeline changed beyond recognition as Apocalypse arrived earlier than in the original timeline and took over the world.

Age of Apocalypse featured bleak, alternate reality versions of X-Men characters, including a Wolverine who was missing a hand and a completely reimagined Nate Gray. Several of the characters such as Gray and Dark Beast would migrate to the core Marvel universe over the years, owing their continued existence to the long popularity of the story. 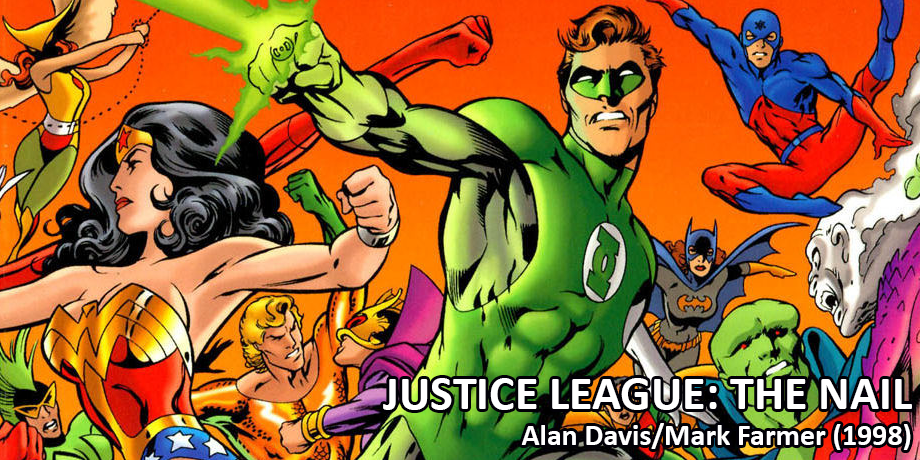 DC’s Elseworlds aren’t known for being terribly cheery places. Explicitly designed to create stories freed from the restraints of continuity, Elseworlds stories have been entertaining readers for years with their dark tales and alternate universes. One in particular, The Nail, featured a dark world full of loss and death set amidst the technicolor of DC’s later years.

In this alternate reality, Jonathan and Martha Kent do not find Superman as a baby, because they hit a nail and are tending to a flat tire. As a result, there’s no Superman known in this world. In this reality, Oliver Queen is confined to a wheelchair and the Justice League’s reputation is called into question when a grief-stricken Batman kills The Joker following the murders of Robin and Batgirl. Everything terrible you can think of to happen does happen, though this story proved popular enough to warrant a sequel, Another Nail. 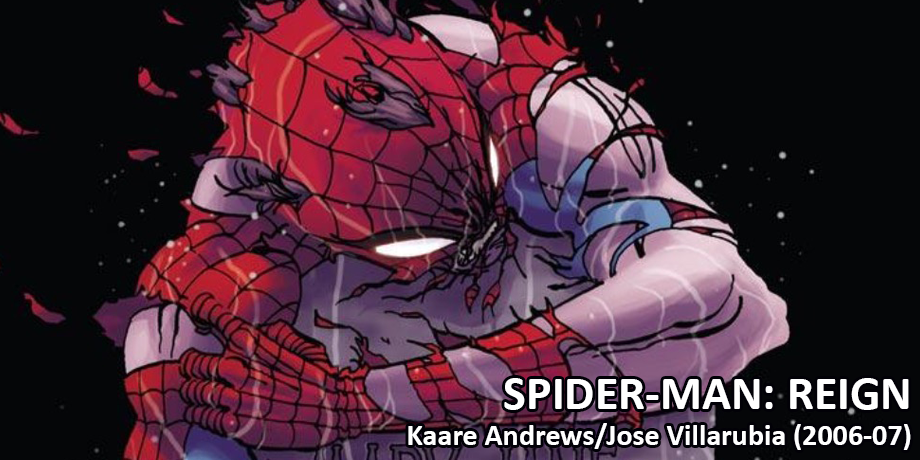 You’ve almost certainly heard of Spider-Man: Reign. It’s been the butt of more than a few jokes. A four issue mini-series released in 2007, Spider-Man: Reign is a darker, more adult story set decades in the future, where Peter Parker is a broken old man and criminal elements rule New York City.

The problem is that Reign may go too far in the other direction. Parker isn’t just broken, he’s miserably pathetic to a point that you can’t really root for him. The story itself is more well-known these days for it’s absurd decisions. Most notably the decision to have killed Mary Jane earlier, dying from radiation poisoning after years of exchanging bodily fluids with Peter.

We really shouldn’t have to explain Kingdom Come to you. Mark Waid and Alex Ross’ 1994 epic was so beloved and so well-received that DC continually alluded to it being the true future of it’s pre-New 52 DC Universe, even going so far as having that story’s Superman appear in the pages of Justice Society of America.

It’s easy to forget, though, that Kingdom Come is a bleak world. Set in an era where the heroes of Earth have retired or moved on. Spurred on by Magog’s execution of The Joker, the younger generation who forced them out are exceedingly violent. Having killed the majority of villains, they spend their days fighting amongst themselves. It’s the destruction of Kansas and the actions of Superman that lead to the return of a golden age of heroism. 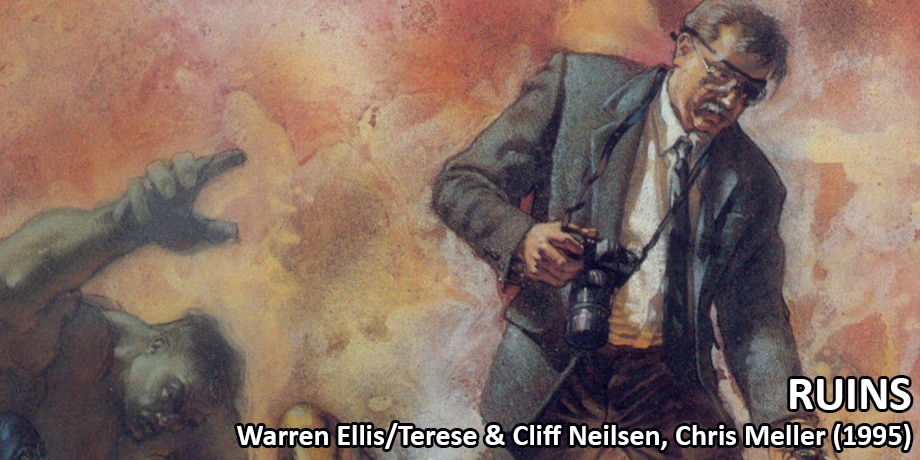 You would be hard-pressed to find an alternate Earth more perverse, disturbing, or terrifying than that of Marvel’s Ruins. Ruins is a companion piece of sorts to Marvels, the Kurt Buseik/Alex Ross masterpiece which highlighted the golden age of Marvel Comics superheroes from the eyes of an everyman reporter, Phil Sheldon. Marvel’s is an engaging piece, telling the saga of the Marvel Universe through the perspective of street-level citizens.

Ruins is it’s dark flipside. Here, things have gone down the wrong path, creating an unforgiving world. Heroes have fallen victim to the reality of the fantastic world, and it’s truly gruesome. Captain Marvel and the Kree remain hidden on a reserve, riddled with cancer and weeping tumors. Wolverine is dying alone in a bar, numbing the pain of his adamantium allergy. And perhaps most gruesome, Bruce Banner’s body is turned inside out by a gamma bomb, his body turning into a hulking pile of tumors and muscle but not dying. Ruins is truly a dark, terrifying reality and a gruesome story worth reading.