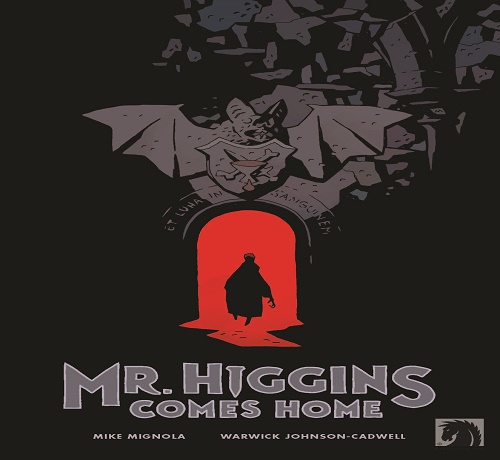 Mr. Higgins Comes Home is a delightful new graphic novel from horror master Mike Mignola, just in time for Halloween. While this tale of vampire hunters, Gothic castles, and long lost loves is familiar territory for Mignola, he tackles the story with the same lightness as his Hellboy and the B.P.R.D. series, which is certainly a departure in tone from his past horror work. 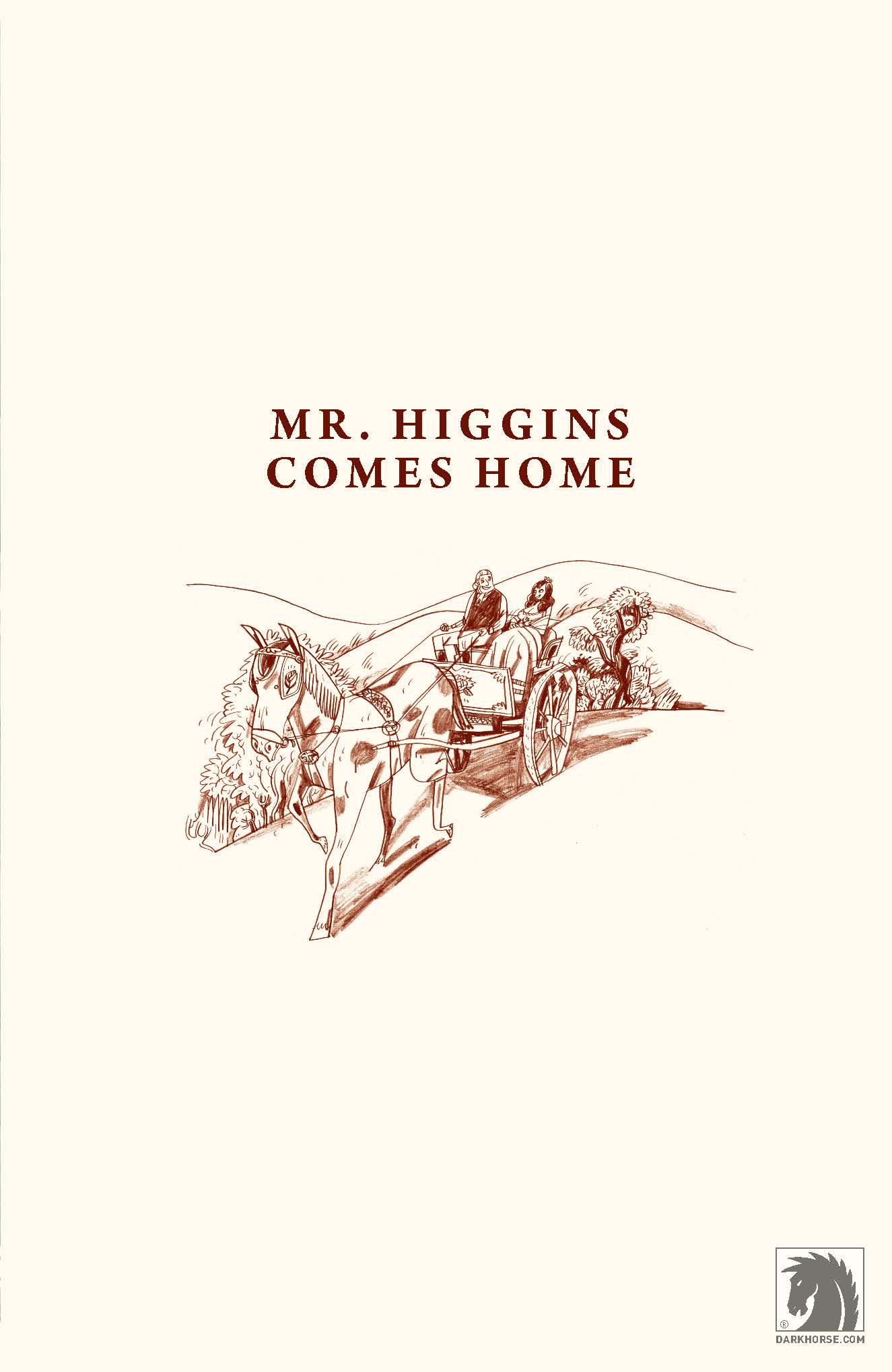 Mignola has often looked to folklore and history for inspiration, and there’s a bit of that in this book, which takes place “somewhere between the Carpathian Mountains and the Black Sea,” the traditional setting of old vampire tales. Walpurgis approaches a night in which all of the vampires get together to renew their communion with Satan himself. (In Germanic folklore, Walpurgis Night is a feast day in which witches are said to gather on the highest peak of the Harz Mountains in Northern Germany.) It is on this night that vampire hunters Meinhardt and his assistant Knox plan to take down Count Golga, the greatest bloodsucker of them all, and his undead guests 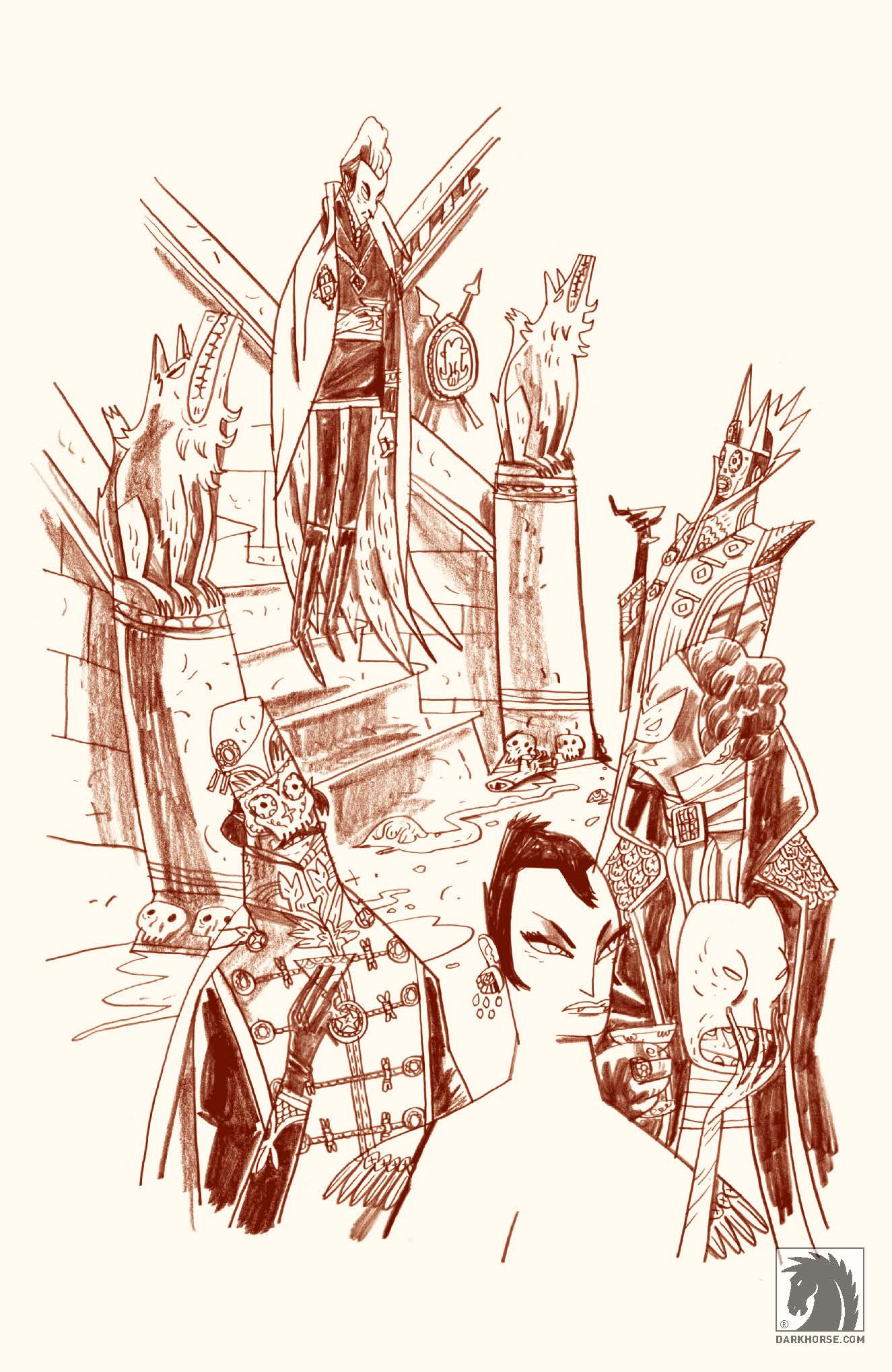 At the center of their mission is the enigmatic Mr. Albert Higgins, a man who has spent much of his life institutionalized but claims to have been turned into a monster by Golga and his minions. Meinhardt believes Higgins is the key to finding Golga and putting an end to him once and for all. 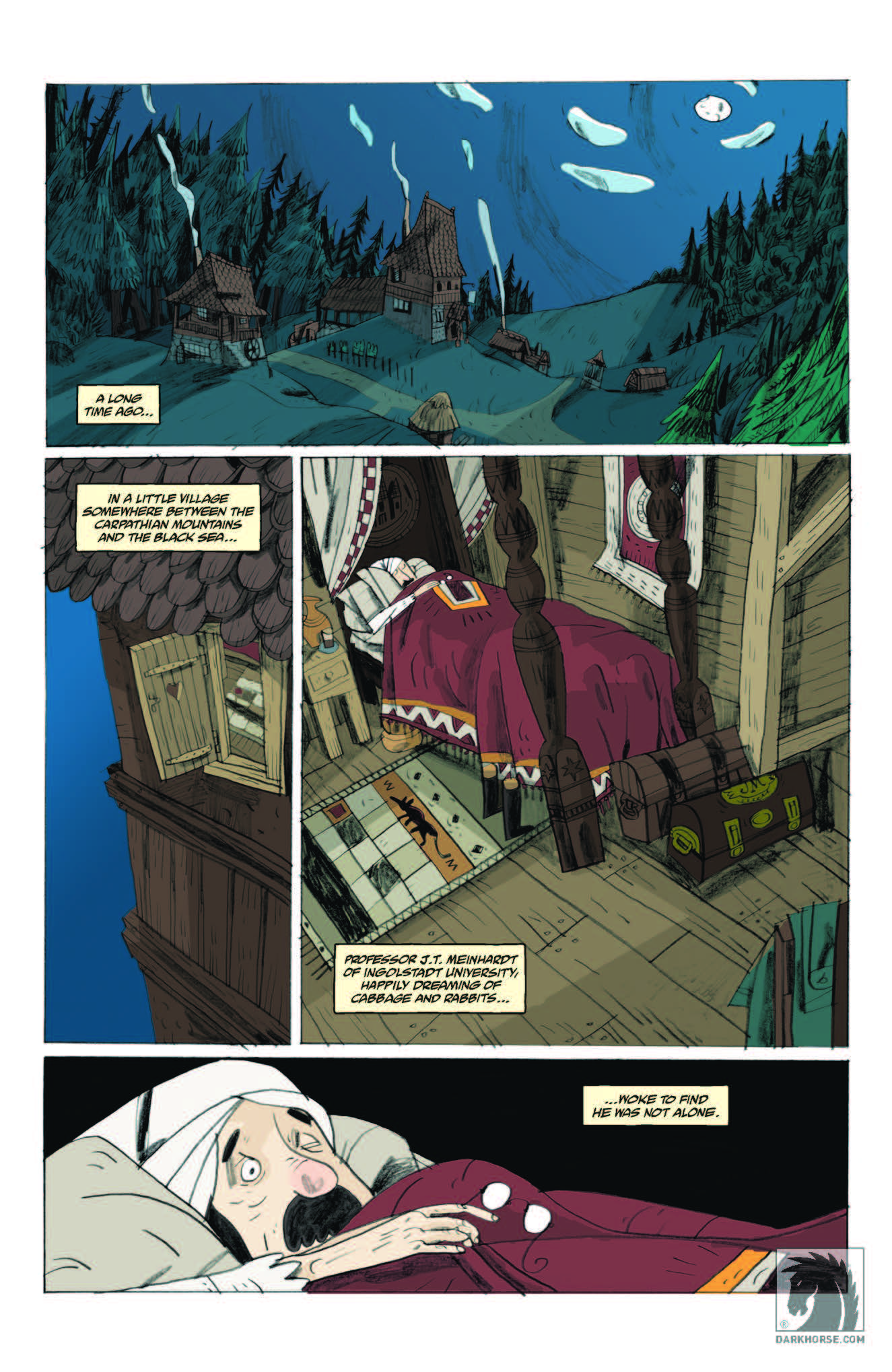 Mignola’s obvious love of the old Universal Monster movies and Hammer films shines through in this book. Meinhardt isn’t the gruff vampire hunter of Baltimore, another Mignola book with similar subject matter. No, Meinhardt is optimistic and smart, and carries a certain lightness to him. Mignola writes the character as an obvious homage to Abraham Van Helsing, but also plays the hero for laughs. 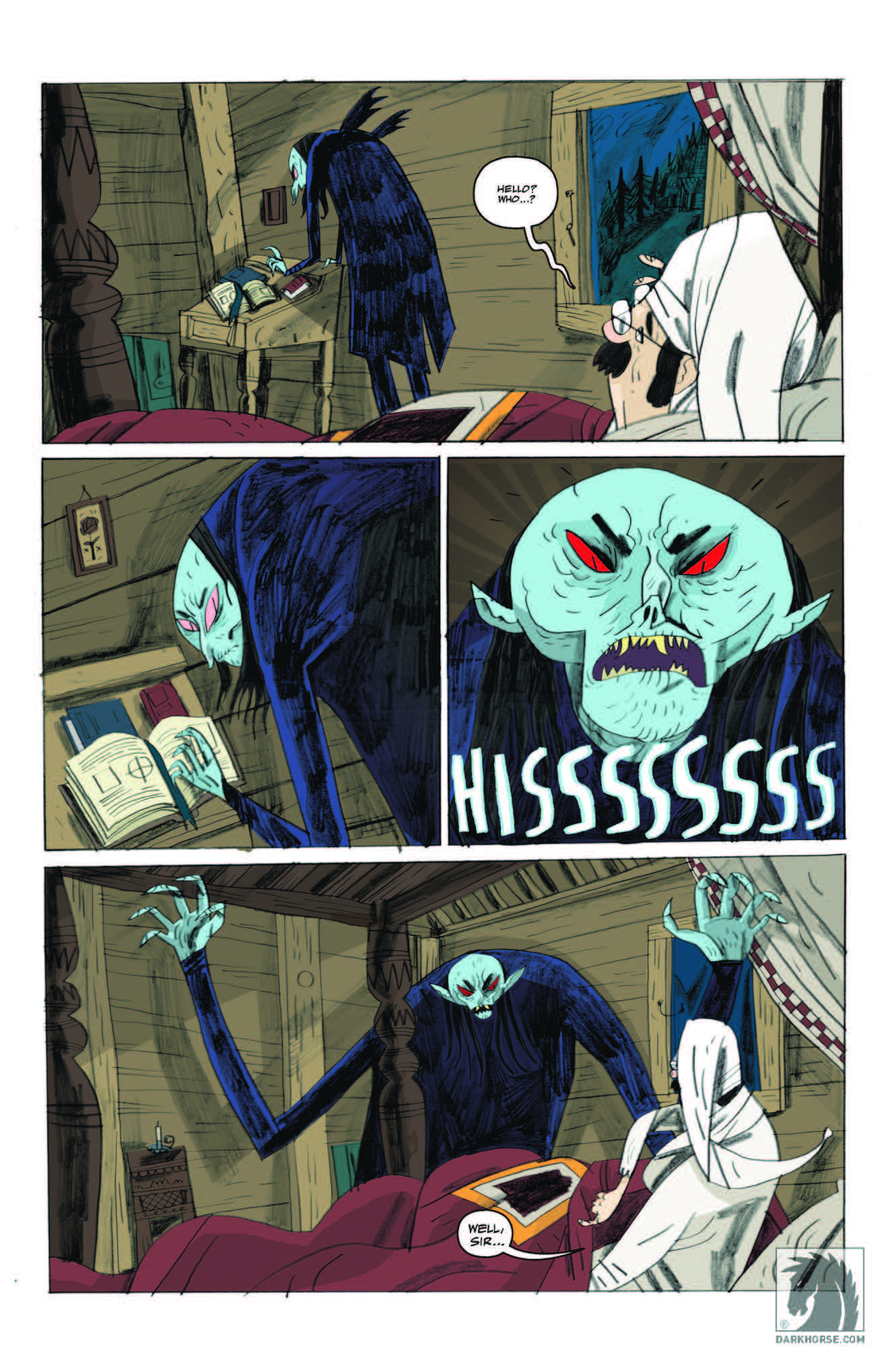 In fact, one of the shining aspects of this book is just how funny it is. Mignola approaches the story with a newspaper comic strip sort of humor, zipping through quite a few one-liners and moments of physical comedy that artist Warwick Johnson-Cadwell depicts perfectly with his beautiful drawings. Of course, when Mignola wants to push things towards tragedy — his usual mode of writing, I’d say — he does so with ease. Higgins is the book’s most tragic character, and his arc balances out Meinhardt’s more comedic antics. 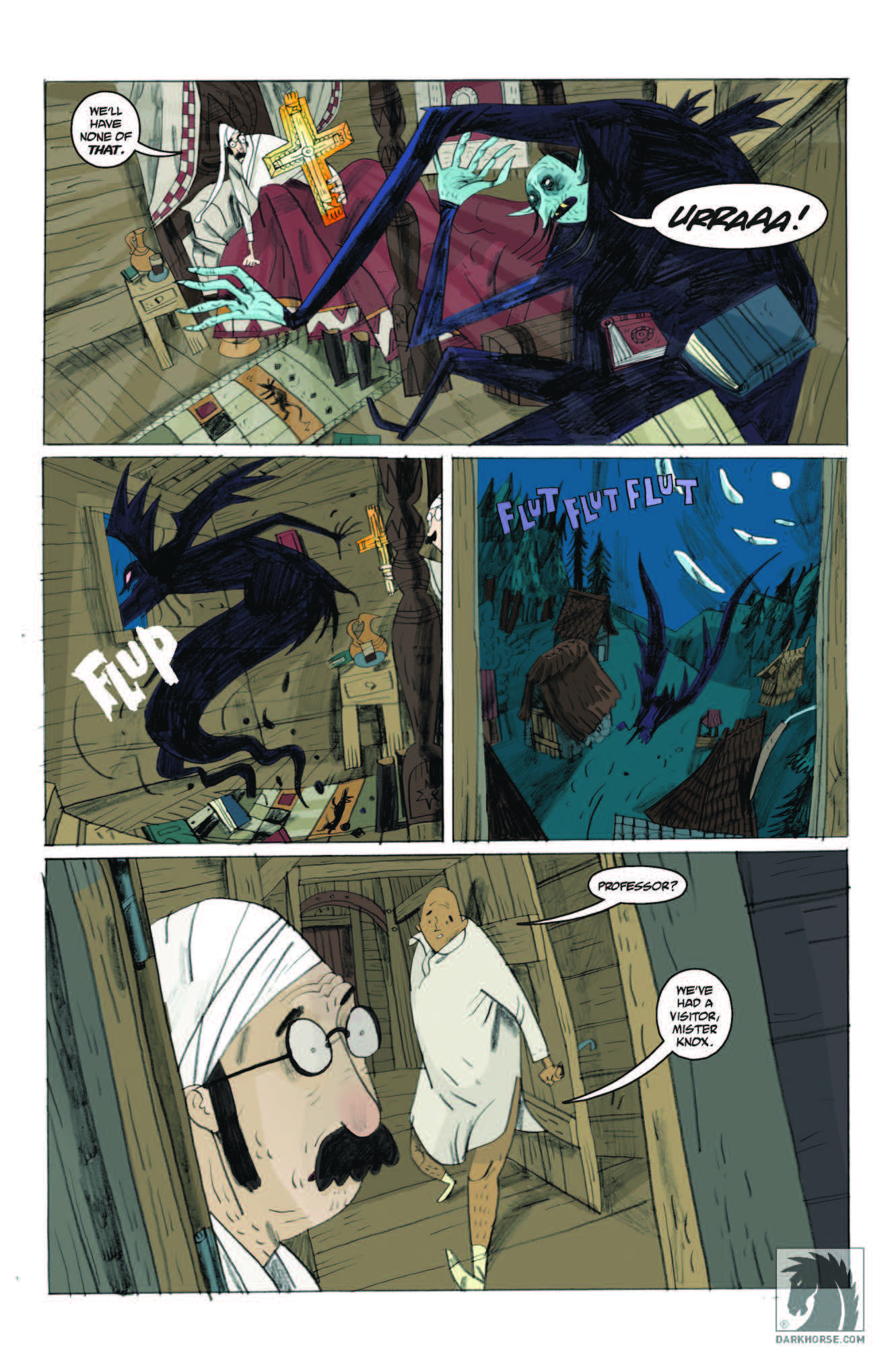 It’s not often that Mignola draws his own books anymore, especially not now that he’s taken up watercoloring, but his eye for artistic collaboration continues to amaze with this partnership with Johnson-Cadwell, who provides beautiful pencils and vibrant colors to the book. The scenes inside Castle Golga are absolutely astonishing, jampacked with tons of little details, such as creepy paintings, stuffed animal heads, and grotesque weapons hanging from the walls. I especially enjoyed Johnson-Cadwell’s designs for the vampires, which he doesn’t bother to mask as humans, even though their outfits are elegant and there’s a certain haunting beauty to their faces. It’s in his fantastic color work that we see the creatures of the night beneath. 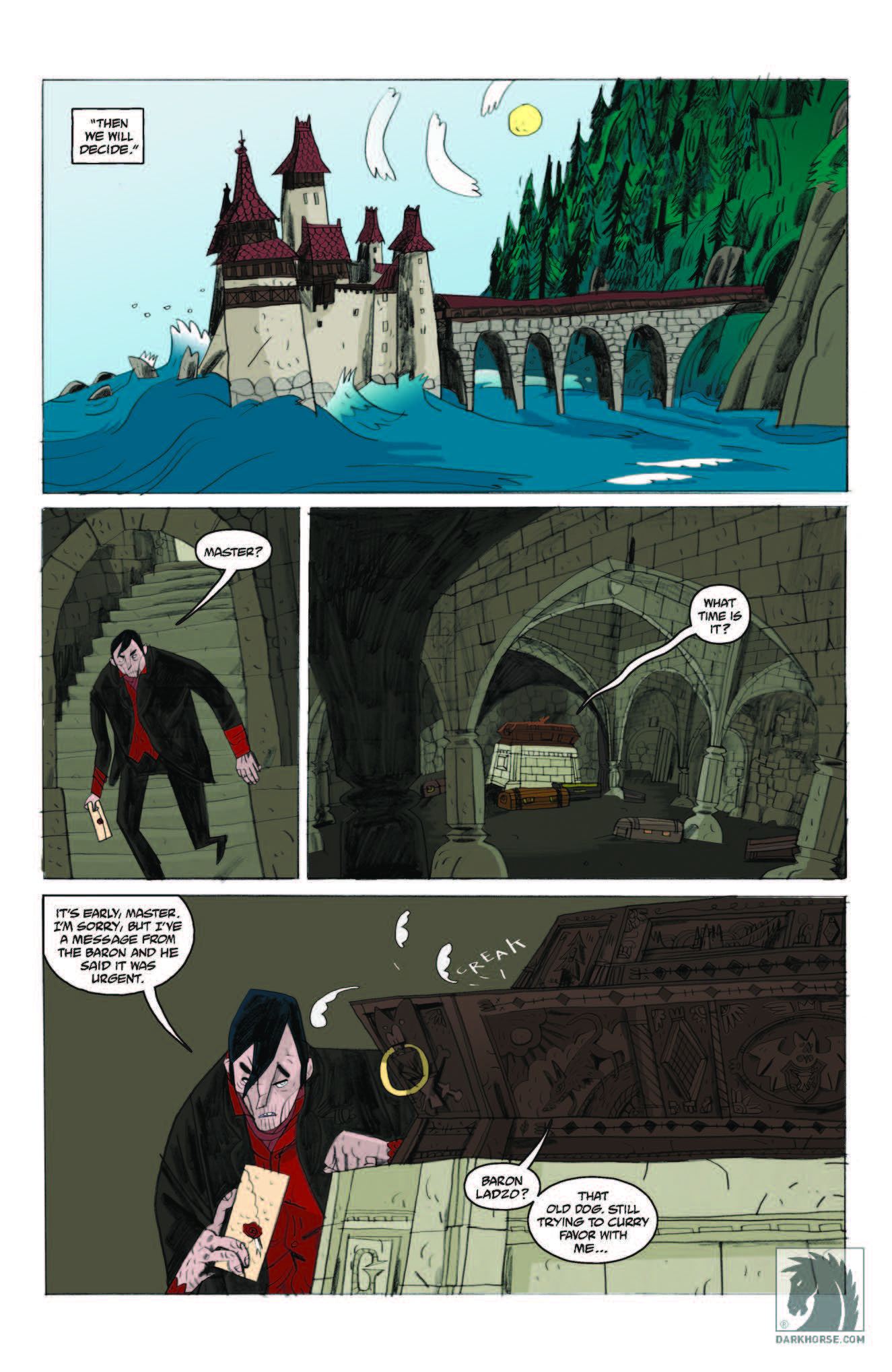 Mr. Higgins Comes Home plays out like the most delicious Halloween treat. Fans of Hammer films and vampire tales in general will be very pleased. And what to say to Mignola fans except that the master of the comic book horror tale is as good here as he ever has been. 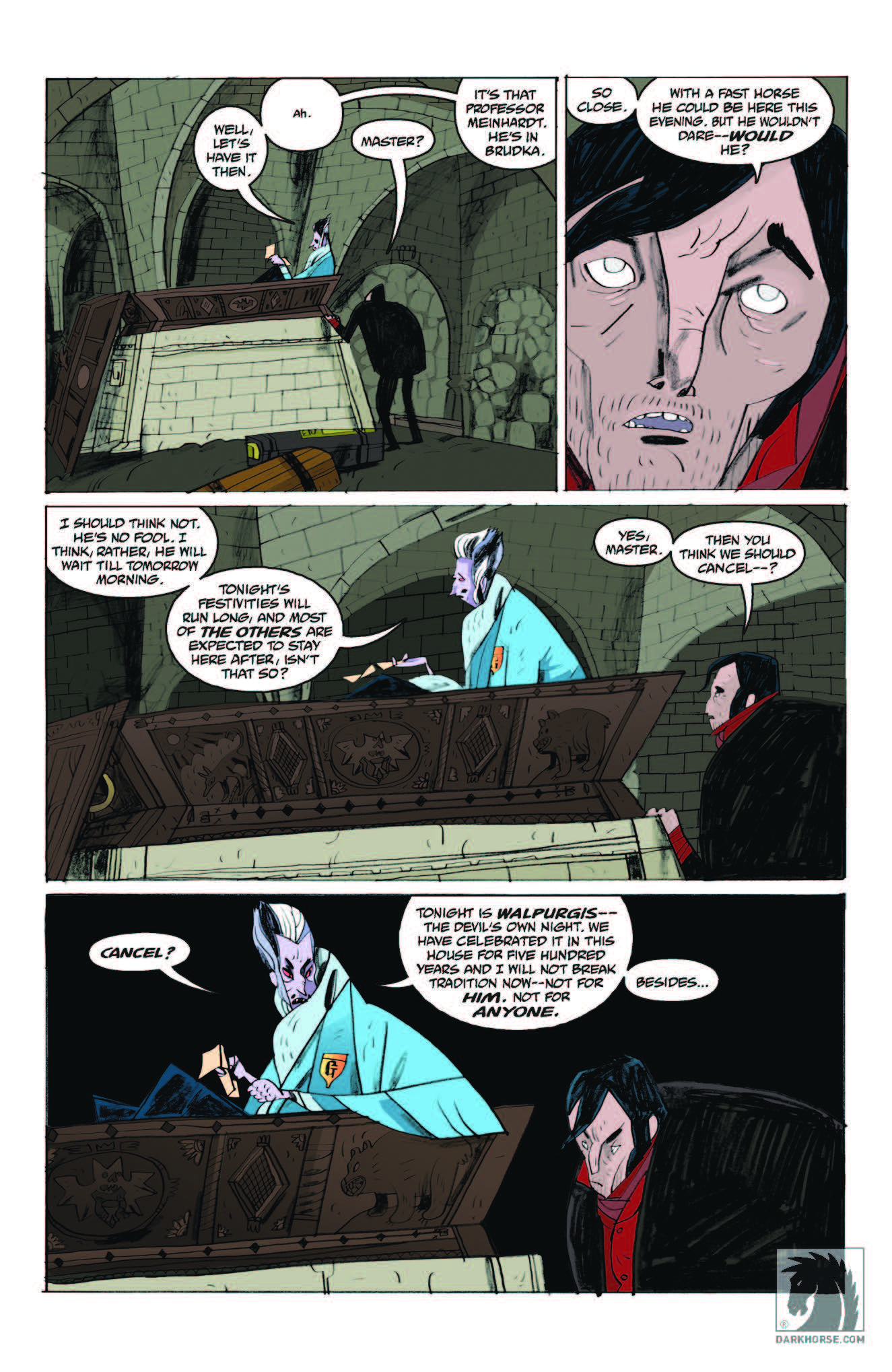