Movies that Inspired Stranger Things a Geeked Gods List By Michael Burgner By now if you’re reading this you’ve already seen the series and are just looking for the...
by Ashish September 16, 2016 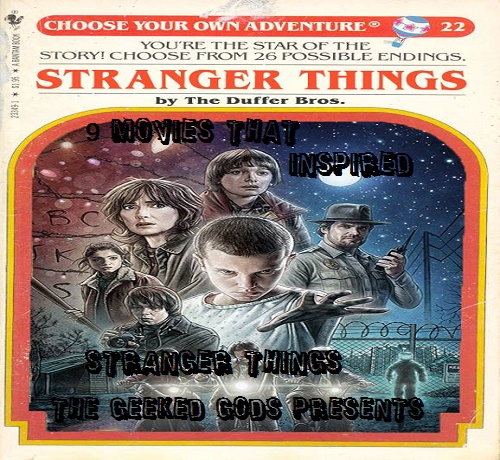 By now if you’re reading this you’ve already seen the series and are just looking for the easter eggs you may have missed. I mean this show pretty much referenced every well known sci-fi movie of the 70’s and 80’s, especially by Stephen King. The show is written and directed by the Duffer brothers, Matt and Ross. Though they’re relatively new to the film/tv world in a professional capacity, they’ve been fans since they were kids. Before getting Stranger Things up and running they both wanted to be involved in the remake of Stephen King’s clown classic “IT” . Unfortunately for them, but thankful for all of us who binge watched it in one night. Then we couldn’t go to sleep without wetting ourselves. Just so you can remember those scene’s I’ve listed them below alongside their famous retro counterparts.

Who could forget the scene in E.T. where the kids are running away with E.T and then to avoid the police, E.T makes them fly up and over the moon

One of the most Iconic movie moments and Jack Nicholson’s defining role, “HERE’s Johnny!” Inspired by Johnny Carsons’ intro to the Tonight Show

Drew Barrymore, at age 11  blowing things up with her mind. Talk about girl power.

Close Encounters of the third kind

Imagine walking through the woods and stumbling upon something you’ve never seen before That’s like…my worst nightmare! These kids though they’re not scared

Nothing more normal and safe than walking down a supposedly abandoned railroad track am I right?

Hey you Guys!! This is one of the more nerve-wracking scenes in The Goonies, but I think if Chunk had a telekinetic friend he wouldn’t have been so scared.

Let’s be real, Sigourney Weaver is a badass in this movie from behind the back basketball shot, to this line before taking on the alien. Just like Nancy in Stranger Things.

Have you ever heard voices late at night and have been creeped out? Both of these scenes creep me out! Talking to another Dimension!

We all know how Freddy got those Scars! Just in case you didn’t here’s a video, and also a similar scene in Stranger Things killing the demogorgon or whatever skip to 2:50

Matt and Russ have confirmed they were inspired by Elfen Lied, an anime from 2004 which is based on an older anime Akira. Just thought I’d show you the trailer and let you figure out how they got from point A to point B.