MIXTAPE TODAY-Top 10 Sci-Fi Songs Science Fiction is awesome. It has captured the imaginations of some of the greatest minds since Jules Verne first dreamed that humankind could settle...
by James O'Donnell January 18, 2017 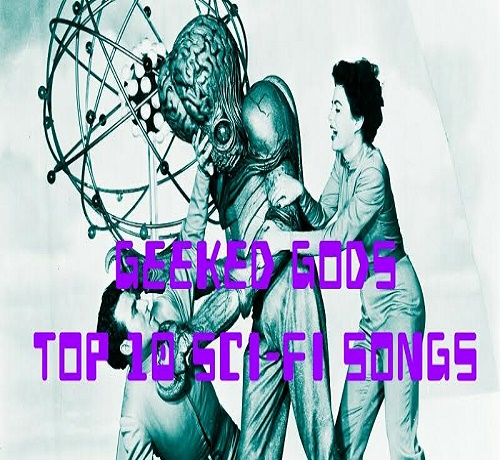 Science Fiction is awesome. It has captured the imaginations of some of the greatest minds since Jules Verne first dreamed that humankind could settle its petty bullshit and reach out beyond the stars. This influence has permeated our culture for generations, from the works of Phillip K. Dick and Kurt Vonnegut to films like Back to the Future and Star Trek. One consistently overlooked aspect of Sci-Fi culture is its music. And in this seemingly worst possible timeline I’d like to offer a list of my top favorite science fiction influenced songs to help you escape from the reality of our Madea-movie producing, reality-TV-loving, custard brained culture.

We are, without a doubt, living in what Futurama once dubbed “the stupid ages.” When future generations look back on our society they will likely trace our high interest loan-loving, climate change denying, high-fructose corn syrup society back to a singular rallying cry: Weird Al’s pastiche Devo tribute Dare to be Stupid. Yankovic took his subject’s signature synth heavy style and boiled its message into a simple message: that it’s OK to put all one’s eggs in a single basket as well as eat a bunch of sushi and neglect to leave a tip. This song was so amazing that it inspired Devo’s Mark Mothersburgh to refer to it as, “The most beautiful thing I’d ever heard. He sort of re-sculpted that song into something else and…I hate him for it…”

Billy Joel’s deadpan depiction of a horrific apocalypse that sees New York City burned to the ground is a bit of a diamond in the rough when it comes to Science Fiction. Living in the far off year of 2017 the narrator describes eerily prophetic scenes in which he watches mighty skyscrapers topple (which you’ve probably heard happened in 2001) and sees the city go completely dark (New York State blackout of 2003). He apathetically contrasts churches burning in Harlem and the Bronx being blown away while the upper class migrate to the Palisades and the Yankees taking the first ferry they could find to the North Fork of Long Island. The dour lyrics are contrasted by the upbeat and somewhat overproduced, 1980’s song design layered over a rich melody. Joel manages to sneak a compelling story into a catchy song that makes you feel like you’d wandered into some dank pub, a brief respite from fighting hoards of nuclear zombies over the last gallon of gasoline for 50 miles, to find some folk singer telling the tale of the last days of New York City.

Richard O’Brien’s 1975 classic helped launch the careers of Susan Sarandon, Tim Curry and Meatloaf. It tells the story of a desperately square couple that becomes the unfortunate houseguests of Dr. Frank N. Furter and his staff of equally eccentric characters and concubines. The song itself first reads as a blazing rock and roll anthem that describes some kind of weird sex-dance and introduces the movie’s new characters. As the story unfolds we learn that the strange hosts are in reality aliens from the planet Transsexual in the galaxy of Transylvania and the time warp isn’t so much a fetish-driven porno-dance as it is an explanation for how our otherworldly hosts came to our planet in the first place.

The Flaming Lips classic makes the list for both its subject nature and its musical style. The band blends a robotic chord structure with well-produced synthesizers and samples of robotic voiceovers. The lyrics describe a superhero named Yoshimi who works a boring civil service job by day and protects innocent citizens from being eaten by their mechanical superiors by night. The lyrics almost read like a rallying cry from the citizenry of her city, with the protagonist redoubling his belief in his hero who, no matter the odds, will defeat her challengers.

From the song’s outset Stevens master songwriting ability is on display with the piano intro painting a picture of flying saucers emerging through a cloudy horizon in the listener’s head. The song is written from the prospective of an eyewitness to a UFO sighting in southern Illinois during which a gigantic triangular craft silently hovering roughly 100 feet above the surface which actually (allegedly) happened in 2000. The songwriter described it as a dual tribute to the United States tradition of immigration and his parents referring to their family as “star-people” throughout the 1980’s (I’m guessing they were probably big Carl Sagan fans or completely insane).

While many would point to songs like Ziggy Stardust, Life on Mars or Major Tom as Bowie’s great (or only) contributions to Science Fiction music, I would argue that the title track from his 1974 album is his absolute best. The song starts out with an ominous pretext, “This isn’t rock and roll. This is Genocide!” From there a classic rock and roll chord progression cranks over a driving beat- a style that can easily be put in the same retro futurist movement that inspired the aforementioned Richard O’Brien to create the Rocky Horror Picture Show. Bowie then begins to describe a scene that feels like something out of Terry Gilliam’s Brazil in which some silicone injected post-apocalyptic socialite is pulled from an oxygen stasis and immediately asks where the next party will take place. In his signature style, Bowie tells the story of a society in ruins trying it go through the motions as they’re systematically hunted by the ravenous Diamond Dogs.

This bizarre detour into the band’s signature theme of devolution (Get it- DEVOlution?) earns the number four spot on our countdown. The song reads like a rallying cry for the hordes of mutant slugs backsliding into their animal ancestors. Its chorus borrows from the classic Island of Dr. Moreau, “Are we not men?” With the mutant response calling back proudly, “We are Devo!” The band’s theory of devolution (which eerily seems to be playing itself out now) started with a student art movement at Kent State University in the early 1970s. After meeting songwriter Mark Mothersbaugh (the guy that hates Weird Al) the trio formed a band and brought their crazy theory to life in the form of their “nerds inherit the earth” stage show. This song encapsulates so much of what makes Devo’s music timeless, with its brutally cynical message compressed into an off-putting 7/8ths time signature before devolving (oh snap) into a more comforting 4/4.

This track from Radiohead’s Ok Computer gets its title from Bob Dylan’s cut Subterranean Homesick Blues from his legendary Highway-61 Revisited. The song is written from the perspective of an alien (or at least a really depressed dude that thinks he’s an alien) who’s apparently been stranded on Earth. He notes the strangeness of the animals that surround him who, “Lock up their spirits,” and “Live for their secrets” with an eerie sense of disconnect. The narrator then dreams of a day that his alien brethren scoop him out while out on a late night drive in the remote country. The music has sort of a loose, airy feel that is connected by tight choruses that then dive back into an otherworldly bridge. The song is said to be a guitar and synthesizer tribute to Miles Davis’ Bitches Brew.

This song does in 4 minutes what Christopher Nolan’s Interstellar failed to do in 3 excruciating hours. Created by one of the greatest bands to come out of the Area-rock movement in the 1970s, it written by the band’s astrophysics loving guitarist Brian May. May called this track “Sci-Fi Folk” and a chord heavy 12-string guitar accompanied by a standup bass and Celtic drums drives that folksy nature home. The lyrics tell the heartbreaking story of a group of scientists who travel at the speed of light to a planet that is 50 light-years away and when they return our protagonist finds that everyone he’s ever known and loved is long dead, including his wife and children. Now the same age as his grandchildren, he wanders to the beach where his beloved had written him desperate love notes in the sand. The song’s ending is a devastating reminder that time moves only in one direction and the POWER OF LOVE DOESN’T NEGATE THE LAWS OF PHYSICS, MATTHEW MCCONAUGHEY!

Rounding out the list is the smash single from the Brooklyn born punk rockers-turned rap gods’ 1998 joint Hello Nasty. Everything about this song smacks of the Sci-Fi Genre, from its giant robot/Kaiju themed music video to the robotic synth driven chorus and backing track. Speaking of the backing track for this cosmic jam, it contains references and samples from such diverse subjects as Stavinsky and Rachmaninoff to sound effects from the cult-classic Sci-Fi Horror From Beyond and a freestyle by the one and only Biz Marquee. The video famously features the Boys squaring off in an epic battle while piloting a giant robot but many people probably don’t know that this groundbreaking mini-movie was directed by Nathanial Hornblower aka MCA aka Adam Yauch (RIP). It went on to win 1999’s Grammy for Best Performance by a Duo or Group against very 90’s songs like Mya & ODB’s Ghetto Superstar and Rosa Parks by Outkast.

There you have it, true believers, the perfect soundtrack to prepare yourselves for the future, whether it’s a smoldering pile of ashes surrounded by a gaggle of mouth breathing mutants, or a kick ass utopia where we can travel at the speed of light and the Beastie Boys save us from monsters.