Superhero culture has completely taken over our cultural landscape from Movies to Television and even college courses that teach the psychology of Batman. These characters have made a lasting...
by James O'Donnell February 7, 2017

Superhero culture has completely taken over our cultural landscape from Movies to Television and even college courses that teach the psychology of Batman. These characters have made a lasting impact through so many channels, arguably the biggest being music.  I’d like to present a mixtape of my top 5 super-songs to get your pumped up for your nights of fighting crime.

This classic theme song is engrained in the hearts and minds of each and every nerd born this side of 1975. Written by sit-com god/Charlie Sheen arch-nemesis Chuck Lorrie the song taught a generation of turtle fans everything the only four truths they need to know:

-Raphael is cruel but rude (gimmie a break).

-Michelangelo is a party dude. 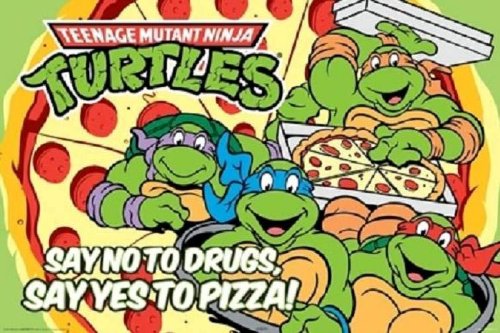 Truly words to live by.

Walk into any comic book shop in the United States and sing the first seven notes of this theme and you’re guaranteed to hear someone respond with the second half of this iconic song’s melody. This high-octane theme driven by heavy metal guitar style guitar and cyber punk synth has been covered or sampled a myriad of artists, from Powerglove to Nyle. Penned by the same writer that brought us the Power Rangers Theme, this song is so closely associated with the X-Men that it has been featured, in some capacity, in all of the live action films to date. Here’s hoping that when Fox backs a dump truck of money on Hugh Jackman’s lawn to play Weapon-X in Deadpool 3 they work both this song and the yellow spandex the big screen treatment they deserve.

It should serve as no surprise to anybody who has seen a movie in the last 40 years that a theme from John Williams might turn up on a list of great songs. William’s score for Richard Donner’s classic Superman does in 5 minutes what Zach Snyder has failed to do in 5 hours of dismal grey movie time: present a fun yet serious take on the Man of Steel. This song starts off with a humble trumpet playing the song’s main theme then suddenly sweeps up with a fantastical orchestral sweep, like Superman lifting off to save the day. Its thumping backbone reminds the listener of a World War 2-era march (because yanno Supes is 100% ‘Murrican) and in Williams’s signature style delves into a romantic valley (for the ladies) then back into a whimsical flourish that lets the audience know you can take Superman seriously without going full Dark Knight on everybody.

Is there a song more closely associated with a single character than the theme from the oft Meme’d 1960s Spiderman cartoon? For one it gives the listener a full understanding of Spidey’s scope of powers (Whatever a Spider Can/Spins a web any size) his favorite pastimes (catching thieves just like flies) and the origin of his powers (Listen bub- he’s got radioactive blood). It was been referenced in the first two (read: good) Sam Raimi Spiderman films and is also responsible for one of the great Simpsons throwaway characters ever (Spiderpig/Harry Plopper). This song was so engrained in generation of nerds that noted pinheads The Ramones produced a full on punk version back in the 90s.

With respect to the rest of the entries on this list, no superhero theme captures the tone of the movie or character it represents so well as the theme from Tim Burton’s Batman. From it’s dour tone, driving rhythm and manically beautiful bridges the song lets the listener know from the film’s outset that they were in for a dark but fun adventure with a little, “Ya wanna get nuts,” thrown in for good measure. This song became so iconic that it lasted through two hugely successful films (Batman, Batman Returns) and two franchise-defining cartoons (Batman: The Animated Series/New Batman Adventures, Batman: Beyond). Many might forget that before Christopher Nolan’s Batman Begins there was a petition by fans to reinstate Elfman’s theme to its rightful place as the main theme for a film about the Caped Crusader.