Mixtape Today #2: Back to School!   Maybe you’re heading back to school this fall. Maybe you’ve been out of school for years but still feel like a new...

Mixtape Today #2: Back to School!

Maybe you’re heading back to school this fall. Maybe you’ve been out of school for years but still feel like a new year starts in September. Whatever the case may be, you can always benefit from bringing along a healthy batch of upbeat catchy tunes tunes.

This playlist was curated by Magdalen Jenne. Listen on 8tracks. 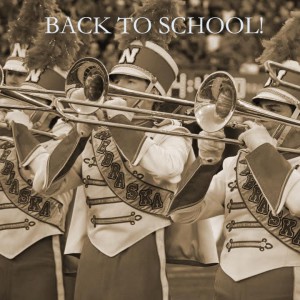 In my youth The Fratellis churned out hit after alt-pop upbeat hit. “Look Out Sunshine!” came out just before I started my senior year of high school, and to me it’ll always be the background music to walking into school like you own the place.

The Matches grew out of a group called The Locals, which contextualizes this track a bit. It’s about losing some parts of yourself in order to make yourself into the person you want to be, but more importantly it’s catchy as hell.

Arguably one of the most upbeat songs about what happens when you have to drop out. The Five deliver the expected mix of killer piano, overdriven lead bass and clean drums but top it off with a horn section that nails it. A pick-me-up for any down day.

Garage rock is the staple genre of being a teenager. Splitsville puts forward some great examples, exhibited here in this muddy, anthemic ballad.

You’ve probably known this couple a dozen times over. Awkward but smart older guy who’s into philosophy dates girl with low self-esteem, bad news all over. A concise summary of every freshman/senior relationship delivered in a digestible power pop track.

Because sometimes it is. A deeper cut from Costello than I’d normally include but if the cheery cynicism fits, wear it!

One of my favorite riffs from the 80s, paired with baroque pop synth. It invokes a feeling that this time around, something’s gonna change for you. Hang on to that in the first couple weeks of school – more often than not it’s not true, but you’re trying, at least.

The Plimsouls scored big with “A Million Miles Away” but this is one of my favorites of theirs. It’s sunny and upbeat and kind of desperate. Nothing says trying to get through another year of school like desperation and any cheer you can muster.

Probably the biggest – probably the only – hit from short-lived group The Toms. Just what it feels like to reconnect with everybody you lost touch with over the summer: pure, sunshiney pop.

I’ve always really loved this song, for one thing because it’s got Rick Wright on lead vocals, but also because if I’m going to listen to something cynical about feeling alienated among your friends, it might as well have some cheerful backing vocals.

Big Star may not have made it in their heyday but they went on to influence just about everybody, from Cheap Trick to Elliott Smith. “Ballad of El Goodo” is some kinda sepia-toned call back to what it’s like to be young, something you can understand even if you’re not old yet.

At least, that’s what we’re all hoping.

Do you have thoughts on this mixtape let us know in the comments below or you can tweet  the author @vintagerainbows or us @thegeekedgods.