The Mist-Something in the Air-A Review By Ashish Thomas “The horrors of the Inquisition are nothing compared to the fates your mind can imagine for your loved ones.” ― Stephen...
by Ashish July 4, 2017 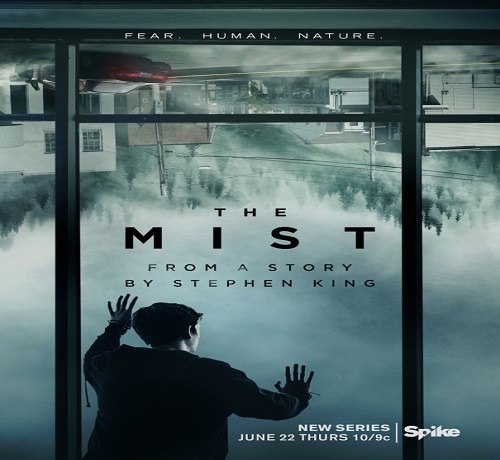 “The horrors of the Inquisition are nothing compared to the fates your mind can imagine for your loved ones.”
― Stephen King, The Mist

As a kid, one of my favorite series to read was Dark Forces Anthology in that series one of my favorite novels was the Mist. I didn’t quite understand it as a kid but for some reason enjoyed the book. Later I got to see Frank Darabont’s adaptation which was alright, and the ending still has me shook if you have never seen you should and let me know what you thought of the ending.  It’s funny I thought that would be it from the Mist, however, earlier this year I heard they were working on an adaptation of IT and the Mist and wondered why but after seeing the first three episodes it has fast become one of my favorite shows of the summer.

This is a review of the first three episodes available on demand or the Spike TV App. 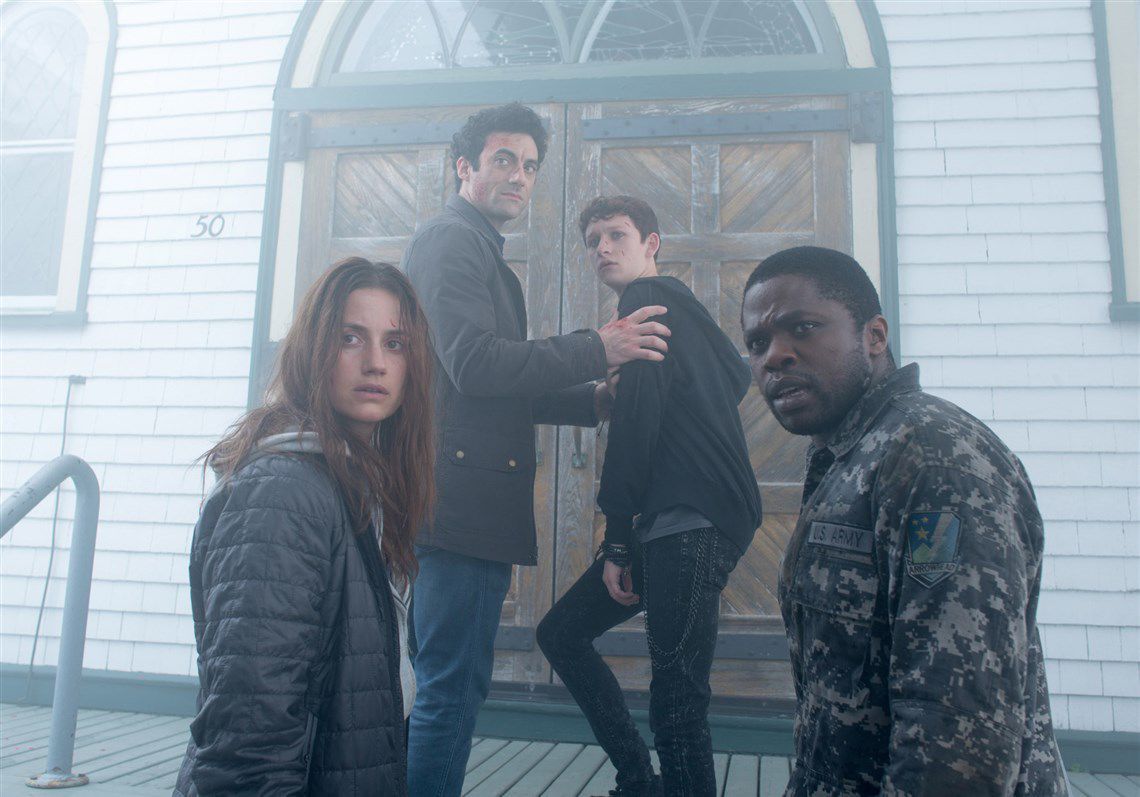 The story starts in the small town of Bridgeville it opens with a Soldier Bryan Hurt and Dog Rufus in a field the Solider has no idea who he is or how he got there.  To the left we see the mist forming the dog runs into the mist and something horrible happens the Soldier agitated goes to the police station to warn people about the mist.  The police officers don’t believe him, think he’s on drugs and forcefully detain him. The story turns to the townsfolk we meet the Copeland family. The family seems to be in turmoil, Eve was just dismissed as a teacher, Kevin and Eve Copeland seem to have a strained relationship. Their relationship gets even more strained after their daughter Alex is sexually assaulted at a party. Eve did not allow Alex to go but Kevin said it was okay. After finding out about the assault things get more strained.  Alex is told by her friend Adrian that the person who assaulted her was Jay the Sheriff’s son. Alex files a complaint and the townspeople start harassing Alex for accusing the town’s golden boy of rape.  There seems to be a strained relationship between the Sheriff and the Copeland’s more on that later. Eve decides to leave Kevin and take Alex away to her sisters. 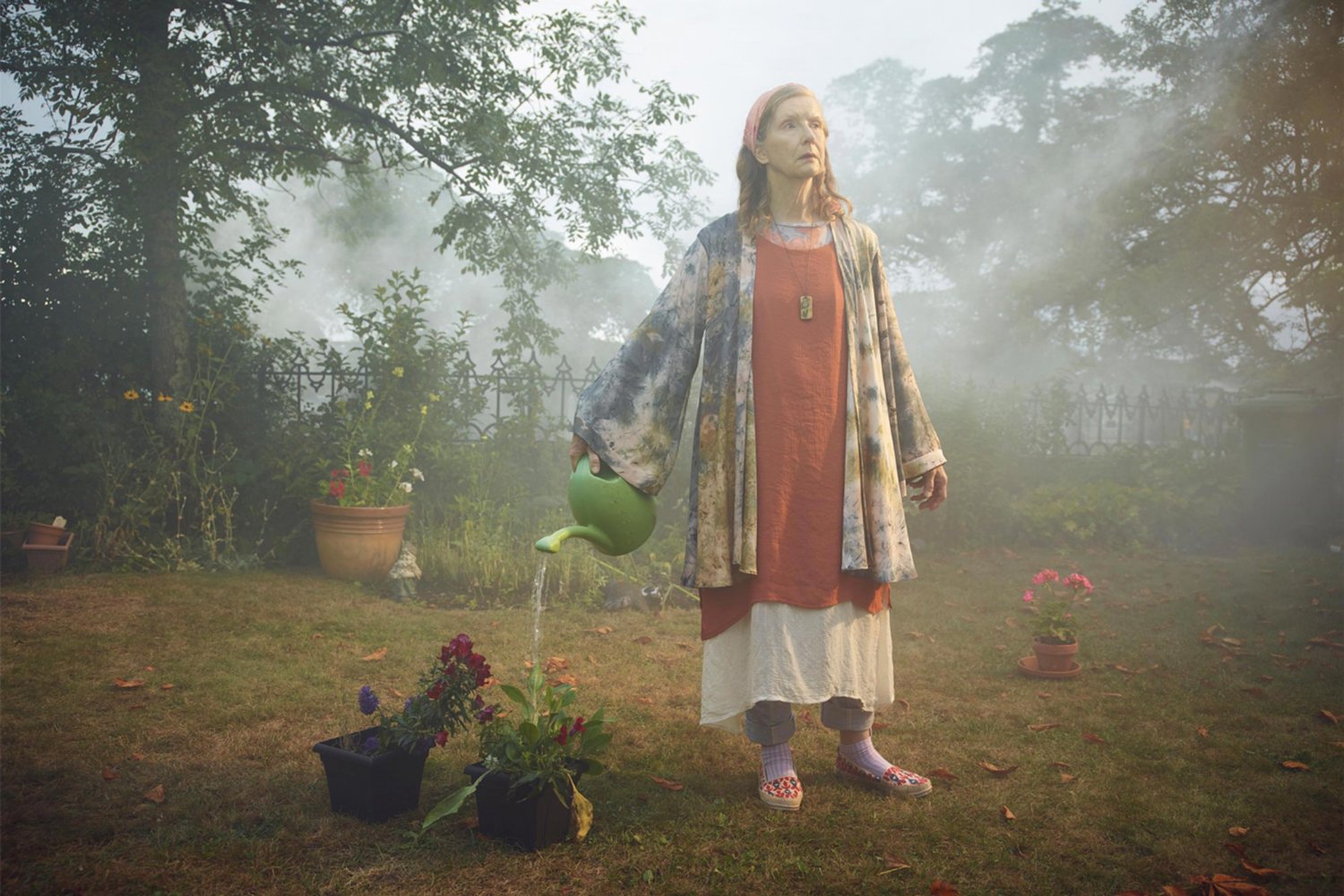 We meet a woman named Natalie who seems to something supernatural is happening in Bridgeville. She goes to the library to investigate and finds news articles on the Black Spring from 1680 the legend of nature turning sour. We will learn more about this later. After she and her husband leave the library a man emerges from the mist asks if they are real then shoots her husband and himself. In shock, she goes to the church. We also meet Mia who seems to be up to no good. She kills a man looking for something eventually she goes to her mother’s house find money fights a man with a gun and eventually is captured and sent to the jail.

At this point, the mist comes into town the sheriff’s deputy is taken by bugs, the sheriff seeing strange things in the mist drives off leaving the prisoners (Soldier Bryan Hunt and Mia Lambert in jail)  Adrian is also at the jail leaving a statement about what happened to Alex. Kevin in the jail releases Mia and Bryan. Eventually, the sheriff’s deputy enters the jail overtaken by something starts going crazy. Eventually, he is taken out. At the same time, Alex and Eve go to the Bridgeville mall and end up where they are stuck with other survivors including Jay the teen accused of sexual assault. 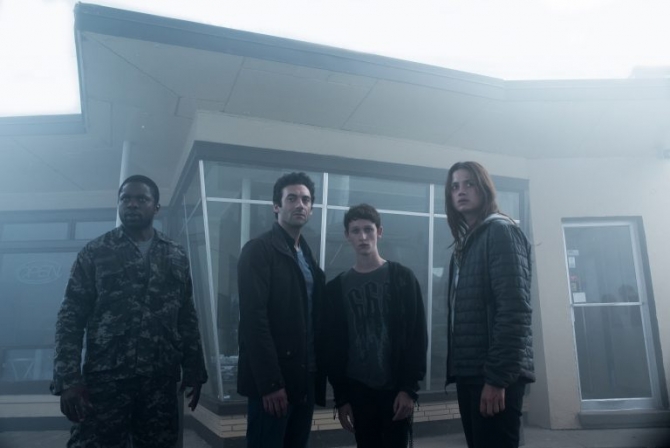 We see the Copeland family separated, Eve and Alex in the mall and Kevin at the police station. The mist has taken over the town. Sheriff Conner left Kevin, Adrian and the prisoners stranded. Kevin decides to try and get to his family at the mall. Conner is driving frantically when a moose goes into his windshield eventually ends up at the church. At the jail, we see Mia attempt to get some pills which Bryan stops her from taking. The quartet gets into a police car and drives someone tries to carjack them, Mia runs over the carjacking and crash the car. They escape the car wreck someone talks to Mia in the mist and they make their way into the church. At the church, tensions run high between Kevin and Conner. Conner then decides to handcuff Mia and Bryan the soldier to a railing. He gets mad that Kevin released the prisoners from the jail. 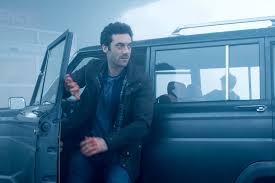 Meanwhile, at the mall, the people inside are panicking, Eve finds another body the Mall manager decides to try and use a drone to try and see what happens, unfortunately, the drone gets stuck but not before seeing Arr written in blood by the body. The Mall manager remembers that there’s a radio and they do a raffle for someone to go find the radio, Eve is selected. A man named Clay volunteers to go with Eve. They find the radio which Clay starts to use calling for the Arrowhead project. Clay then gets violent trying to kill Eve, Eve fights back killing Clay. She returns tells the people of the mall, telling them they couldn’t find the Radio and Clay and she got separated.  We see the people with Clay freaking out about what’s happened. 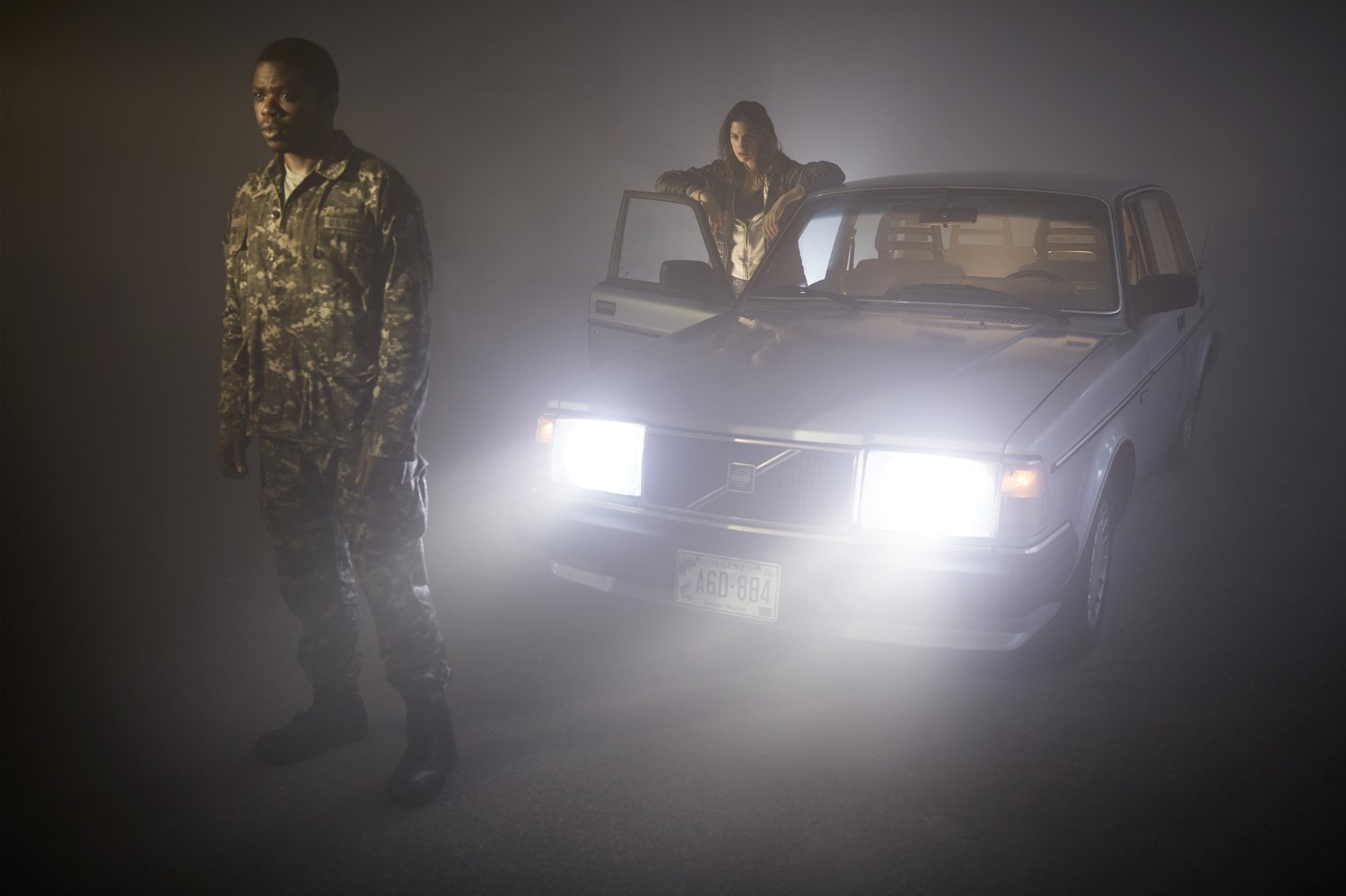 At the Church  Natalie still in shock says there is no Spirit and wants people to share wine in her husband’s memory.  Conner and Kevin’s tension grows. 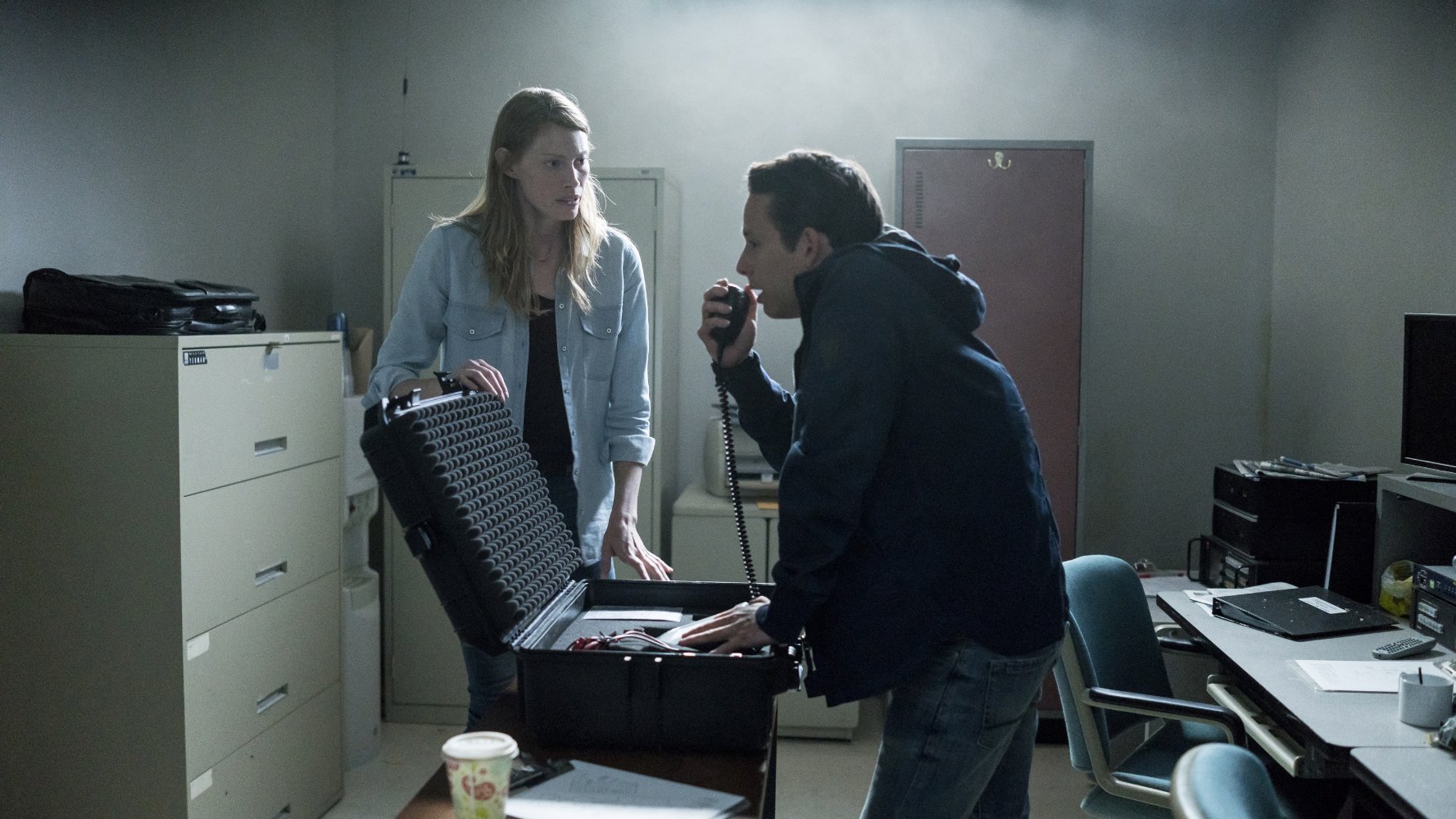 The Episode ends where we see the people with Clay have committed suicide by hanging.

We are back at the Mall with the people who committed suicide being cut down. We find out that they are Military, the people then search to find another person with Dog Tags but claims to know nothing.  We cut back to the Church Kevin talks to Conner about letting Mia and Bryan go with him to the Mall. Conner says no and argues with Kevin. Conner then takes Mia and Bryan and locks them in the basement.

Natalie discusses the Black Spring with a man who says it was a fairytale to keep boys and girls good. He does say it doesn’t work since he’s done bad things. Natalie thanks for his company and says she’s leaving to die. The man goes with Natalie to stop her a bug goes in his ear and we see him change into a creature and sprouts wings bugs leave his body and he dies. The church congregation grabs Natalie and brings her back to the church. Natalie says she wanted to die but now she doesn’t

At the Mall, we see dissension in the air, Eve and some mall people decide to go on their own as they would feel safer. Jay talks to Alex and pleads his innocence. 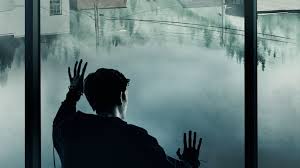 Back at the church, we see Adrian speaking with the Preacher about God and Job, asks to be baptized. During the Baptism Adrian confesses to being a sinner and takes the priest’s keys. Adrian then gets Kevin, Mia, and Bryan out of the basement to go to the Mall. Conner tries to stop Kevin from leaving but Kevin tackles him and they leave. As they leave the priest looks at Adrian.

The Episode ends with Alex making messenger balloons to try and get messages around town. 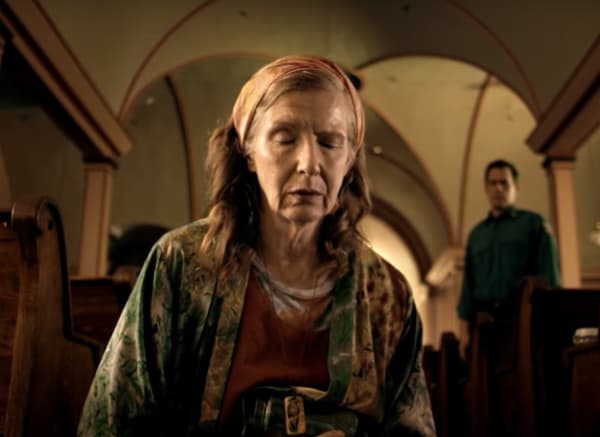 I thoroughly enjoyed the pacing as well as the build up of the mist, I am glad the show decided not to focus on the supermarket and starts at different places and doesn’t go right into the horror hiding in the mist. I like the anticipation of the creatures coming we’ve only seen glimpses of the monsters, those effects were done very well. The slow burn of pace doesn’t take away from the story. It makes you invest in the characters also with the writing I hope there are more twists. Something tells me Adrian is not telling the full tale of the Assault and that Jay might be innocent. The turmoil the town is facing seems more dangerous than the mist and everything the mist brings with it. Hopefully, we learn what caused the distress in the Copeland family.  Also, there is tension between Kevin Copeland and Conner the Sheriff that occurred before Alex accused Jay of Sexual Assault hopefully future episodes show us what happened between these two in the past. I enjoying the tying of lore The Black Spring nature turning sour, religion-plague or famine and or a military experiment Arrowhead project as the cause of the mist. I hope they eventually show what causes the mist.  My only criticism would be would like more monster’s shown The Mist has a lot of similarities with the Walking Dead in the way the stories are paced. If the mist doesn’t show more creatures or what’s the cause it could fall into the story lulls of the Walking Dead.

My favorite scene so far was when the snotty woman who was attacking Eve Copeland decided to leave the mall and we see her with part of her face ripped off. She was so nasty that the scene made me jump but also smile cause I couldn’t stand the character. I am sure we will see more satisfying deaths as the Mist go on but this so far was my favorite moment.  Frances Conroy Natalie’s character is my favorite, I feel she will be the one to find the answers in the Mist and what to do. The show does a good job with the characters and makes you feel invested in the lives of the town. The storylines allow for some shocking twists which I hope are coming.

There are several Easter Eggs to Stephen King and the original Mist Story. Caution Spoilers

First-Kevin Copeland is a writer. 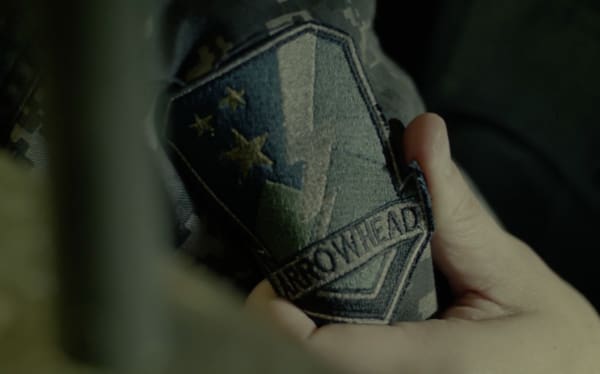 Although this is a different take on the story I am glad that they incorporated the Arrowhead project and the solider’s in this story.  The different locations the Mall and the Church serve to add to the story eventually I think everyone will end up at the Mall.

If you are a fan of the original mist or a fan of apocalyptic horror the Mist might be for you. This is the perfect summer show just remember to keep the lights on.

The Mist is on Spike TV every Thursday at 10 PM