Early in every chapter, there’s a moment where Felix and Rose’s code names are emblazoned in big type. The moment changes – in one their mocking Americans, in another...
by Rachel Bellwoar May 19, 2017

Early in every chapter, there’s a moment where Felix and Rose’s code names are emblazoned in big type. The moment changes – in one their mocking Americans, in another they’re in a tight spot – but wherever their names appear, the reminder is the same. They are Russian spies, and you can never count them out. 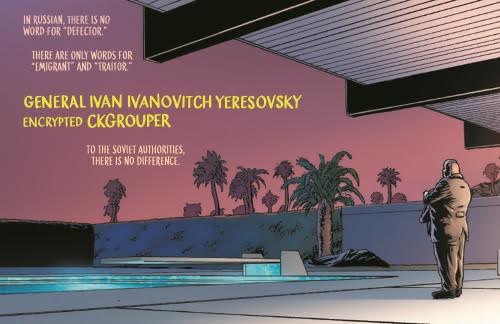 Take the CIA informant who’s ready to hand over a list of Soviet agents for safe passage out of Hong Kong. The CIA are on their way but ask the FBI to hold the fort. Some standard trash talk is thrown, but nothing that can’t be explained by ego, until the FBI bungle the op. Their toothy leader isn’t secretly competent, and our two Russian spies snag the bag carrying the list. Spying isn’t a game of one-upmanship in writer and letterer, Alex de Campi’s, Mayday, but one where characters aren’t on their A-game 24/7. They’re not getting outmaneuvered but making bad decisions, and that loss of veneer, where trash talk can be called distrust again, makes for a thrilling pursuit.

As a huge fan of FX’s The Americans, there’s a coziness to settling into the world of Mayday that feels different and familiar at the same time. The main characters are Russian spies. The time is the Cold War. Both sides of the conflict are accounted for but, unlike The Americans, Felix and Rose don’t have an established relationship. Their superiors can’t trust them, and they can’t trust each other. It tough to act in the best interests of your country when they’re ready to kill you like the enemy. Remove loyalty, and you remove predictability, and Mayday takes plenty of turns on the chase for the defector’s stolen list.

Chapter two is a breathless, bare-knuckle action issue with guns. Set at a gas station, this is the issue where we see what Felix can do. The people there are the people involved, with no late arrivals. You know who’s responsible for what, who’s fallen, and who’s left to take a bullet. Two of the men are surprised clinking glasses and artist, Tony Parker, doesn’t forget it. His eye for continuity, like Felix’s eye for tying up loose ends, means the littlest detail is accounted for in rewarding ways.

Parker orients his panels from unexpected angles – looking up at a driver from the leg space in a car, leaving readers dependent on a mirror’s limited view. Besides adding visual interest, their variety reflects the dysfunction of a shootout without turning it into a fast-paced mess. It’s the difference between seeing a car move to hit someone and catching the moment of impact – this balance between panic and calm, a heightened reality where time stands still. So much is going on but colorist, Blond, provides constants, like an orange sunset, to remind us this is happening over a short period of time. A quiet last page lets you enjoy not knowing what hit you. 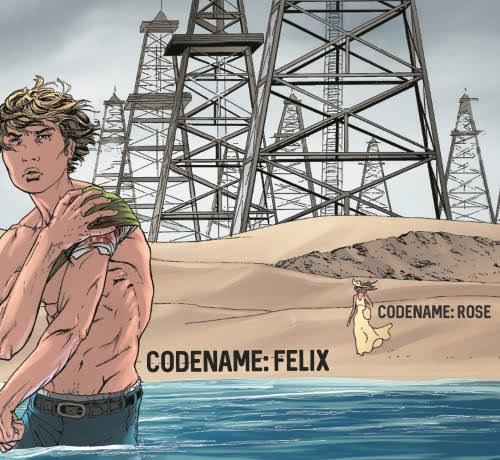 de Campi recommends listening to Steve Reich’s “It’s Gonna Rain, Part 2” for this scene and it’s the daze after an explosion when you’re moving on autopilot and everything’s ringing and repeating on a loop. de Campi scores the entire series and, after reading it through once, I caught myself because, without having listened to a single song, I was ready to call it one of the coolest aspects of the comic. That’s because it’s one of those ideas where execution doesn’t matter. Music’s inclusion and attachment to scenes is enough, and the songs are very much integrated, with lyrics appearing in the background to set a pace for reading and listening. The white noise songs ended up being favorites, but whether you liked a song or not, you got to kick around why it was chosen.

From the opening page, where one of the CIA officers is flirting with a secretary, there’s a division between the way women are treated by men in Mayday and the way the series treats women. With Rose, a recent quote from The Handmaid’s Tale comes to mind. The main character, Offred, is talking about “Mayday” and how the word derives from the French “m’aidez,” meaning “help me.” Rose is a KGB officer, Felix a member of GRU. Since GRU needs a footnote to explain what is (Soviet Military Intelligence) and the KGB needs no introduction, you know which group carries clout. When Rose doesn’t adhere to that hardened image, it’s easy to take a punch at her gender, but de Campi lets us learn a lot more about how she got involved. Rose’s actions can appear more desperate, but they’re also hardened in a way Felix’s aren’t when women leave him unraveled. 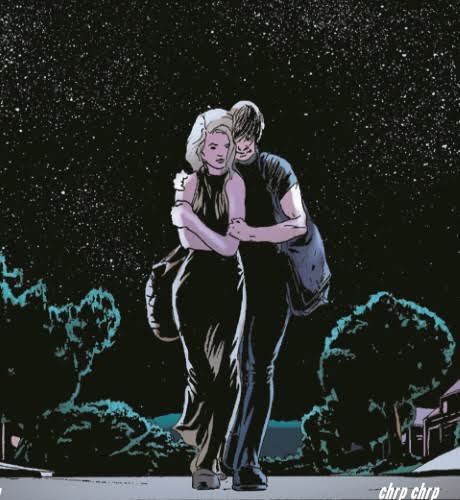 Both historically-minded and atmospheric, Mayday will immerse you in the sights, sounds, and words of the seventies, an indispensable read for fans of the spy genre. There are two more volumes planned, with one addendum. If you have a local comic book store, check and see if the single issues are available before buying the trade. de Campi invites access to her process with clearance and candor in essays that go over her research, recommendations, and choices for the playlist. I’m not sure why they didn’t make the trade (and there is a tradeoff, with the volume including early sketches by Parker) but the singles are worth seeking out.