Love Letter to Star Trek Deep Space Nine Growing up, I watched Star Wars. We had Star Trek The Original Series in the house and I had seen a... 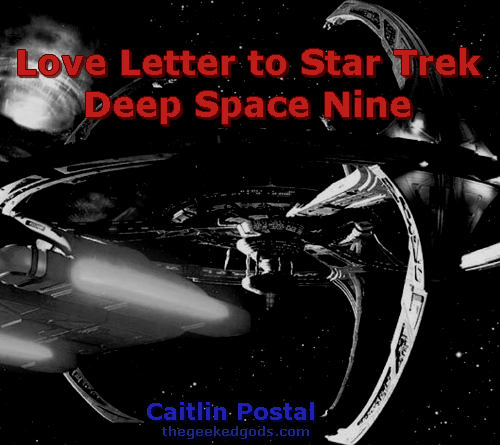 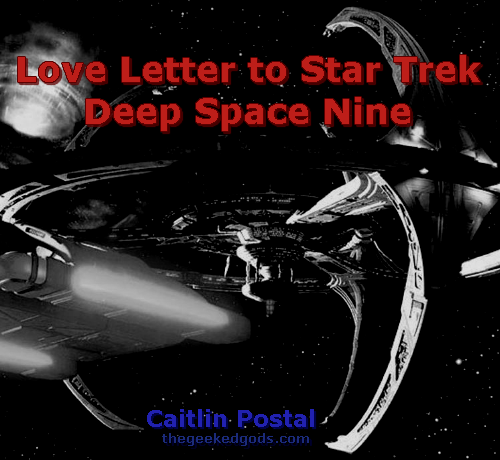 Growing up, I watched Star Wars. We had Star Trek The Original Series in the house and I had seen a few episodes but I loved Star Wars. When it came to choosing a Star Thing to watch, my vote always went to the Wars.

When Star Trek 2009 came out, all that changed. There was finally a Trek for me. I spent a ridiculous amount of time on ontd_startrek (an online community dedicated to all things Trek), I went to see the film with a comm badge on, and I slowly started feeling my way into the franchise with TOS. A few years later, my boyfriend introduced me to the Trek of the 80s and 90s with The Next Generation’s more ponderous, utopian look at the universe of Star Trek. I enjoyed that starship and all its adventures too.

But TOS and TNG, though timeless science fiction, seemed to be talking to a world that has moved on. Into Darkness was disappointing. And I can’t begin to tell you how lackluster the rest of Trek seemed. I didn’t feel like I had a Star Trek of my very own.

Wait, what? That 90’s show that didn’t even feature a spaceship with which to travel where no one had boldly gone before? Star Trek is all about a utopian Federation exploring the galaxy in a futuristic starship! Why would I want to watch a show without that starship?

Yeah, that show. But let me tell you why.

Star Trek Deep Space Nine takes the ensemble cast that worked so well on TOS and TNG and puts them on a space station that’s falling apart at the edge of Federation space right as it becomes a major player in the galaxy, due to the wormhole that provides access to another quadrant of space. With DS9, we get to see the ramifications of life under the Federation. . . and life outside the Federation. The space station isn’t just Starfleet, but rather an amalgamation of life at the edge of space. We get to see the results of war. Benjamin Sisko, the man in charge at DS9, lost his wife in the Battle of Wolf 359, the disastrous battle of the Federation against the invading Borg cube that destroyed 39 starships and cost 11,000 lives. In TNG, the cost was shown on a large scale, but DS9 drives home the human cost and shows us that even survivors carry scars. Not to mention that the entire Alpha Quadrant will soon face war with the Dominion, a seemingly faceless antagonist that rules the Gamma Quadrant. 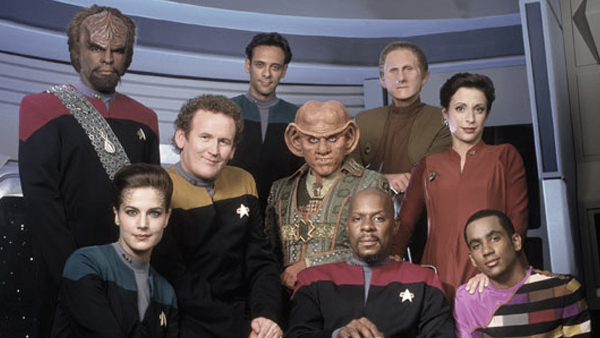 But like I said, this show is about an ensemble cast of complex characters where each one has different motivations for what drives them. Sisko, led by a strong moral compass to do what is right, must balance running a space station with being a single dad. Oh and he’s a reluctant religious figure to the people of Bajor after a run-in with their Prophets during a stint in the worm hole (and all that from the first episode!). His first officer is the Kira Nerys, who was a key player in the Bajoran resistance movement while Bajor was occupied by Cardassia during a war that, while over, is still very much at play throughout this series. Julian Bashir is a doctor who wants to help people, whether or not he’s capable of doing so. Jadzia Dax is a Trill symbiote who has lived seven lifetimes, including one as a male Klingon which is where she and Sisko became close friends. Constable Odo is a gruff shapeshifter who is led not only by doing what is right but also his own need to always be right. Miles O’Brien, the Chief Operations Officer on DS9, is transplanted from TNG to DS9 and is perhaps the most human of everyone: he says things that, while problematic, do represent real world perspectives. Plus, Worf joins the cast of DS9, a friendly (for a Klingon) face from TNG. And that’s just the main crew members. Because of its space station setting, there’s a host of characters who live on the station or pop by for a visit, are not military personnel, and are well worth watching, not the mention the wide variety of antagonists (some of which are periodically on friendly terms with our main cast).

Kira Nerys is of particular note to me. She’s my favorite character on DS9 and, though not always right, she is led by an inner sense of justice and her own personal experiences with injustice. DS9 puts a woman in a high position of power as first officer and lets her wear pants (take that, TOS!). It may be my fondness for brash redheads but Kira Nerys found her way into my heart. She’s extremely capable at her job, beloved by her colleagues, but deeply flawed by her own prejudices. She has to balance her faith with her military position, which isn’t always easy when Sisko is both captain of the station and a religious figure to Bajor.

Villains in DS9 are not just angry bad guys. There’s often a depth added that makes the viewer question

which is the “right” side. With that kind of dimensionality running under the antagonists, we have to really think about who we’re rooting for. When Gul Dukat, a recurring Cardassian antagonist, flirts with Kira Nerys, I’m not sure what to do. And I’ll never forget the episode where Sisko decides it’s time for him to be the villain.

In a recent interview, Chris Pine said “You can’t make a cerebral Star Trek in 2016.” But I’m not sure I want a Star Trek that isn’t cerebral. My first DS9 episode was season one, episode 19, “Duet.” Before I knew anything about the show, I watched an episode that predominantly features two characters in a room just talking. And I cried at the end. I recently rewatched that episode and I cried again. “Duet” presents two characters who are innately familiar with the painful trauma of what happened when Bajor was occupied by Cardassia. Kira, leading the investigation against an apparent war criminal, must confront her own perspectives on the occupation and the Cardassians involved. If 2016 Star Trek can’t put two people in a room for an hour and keep its viewers interested, then I’m not sure 2016 Star Trek can do what Star Trek does best.

Do I love the new Star Trek films? Not always. Will I see them in theatres? Absolutely. Then I’ll go home, decide which Trek I want to watch and settle in for a night of quality television. Now I have DS9. If you need some help getting started, check out Max Temkin’s guide to DS9 in 82.5 hours.