Jason Latour’s gritty southern-fried miniseries Loose Ends is set for release by Image on January 25th, and for fans of sweaty, greasy crime stories, that day just may feel like Christmas... 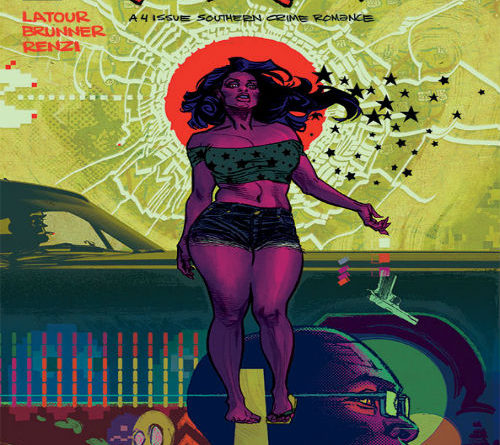 Jason Latour’s gritty southern-fried miniseries Loose Ends is set for release by Image on January 25th, and for fans of sweaty, greasy crime stories, that day just may feel like Christmas for you.

Sonny Gibson steps into a bar one night and his life is changed forever. He is soon to be on the run – and not just from the law. He’s a man with some deep-rooted issues for sure, and this time, he may have gotten himself in pretty deep.

Gibson, a grizzled veteran, stops by a familiar watering hole after getting himself involved in a drug-running scheme, and things quickly spiral out of control into a bloody, drunken mess. Though the story mainly takes place in a North Carolina bar called “The Hideaway” in this issue, the ensuing three issues promise some exhilarating views of “the war-torn streets of Baghdad, and into the bright lights and bloody gutters of South Florida.” In short, it’s bound to be a wild ride.

The story is well-written and I seriously appreciate how Latour doesn’t feel the need to spell everything out to the reader. You witness things as they are happening in real time, and instead of having brainless exposition handed to you, you can figure out what’s going on through natural dialog and the depictions of the events alone. This is something that I love in a comic book, and this is also something that I feel is somewhat uncommon in storytelling. I’m not talking about only comic books here either, though many of them are undoubtedly perpetrators of this. It just makes it that much sweeter when a comic book, a format that was founded on corny exposition, can find creative and intelligent ways to break the mold.

Without spoiling anything, there are a number of scenes in this first offering that hit you right in the gut – especially when we near the climax of the introductory issue. Paired with a deep-fried neon color scheme and scratchy pencils, you can almost smell the humidity and summer heat emanating from the pages. It’s a perfect escape on a cold and dreary January day; you could say it’s just what I needed to escape a bit of the deep winter blues.

While I really cannot praise the colors here enough, that’s not the only positive to the art in Loose Ends. The panels are filled with a style that feels unsettlingly cartoony yet realistic… if you could make sense of that statement. One look at it and you’ll know what I mean. Beyond that, I absolutely fell in love with a lot of the way sound effects or inner thought processes were represented here, as well as an interesting sequence in which one of the characters has a little too much to drink. In this particular scene, you are shown that the inebriation is taking place. This sequence alone is characteristic of what I love so much about Latour’s writing. He doesn’t need the character to drunkenly slur, “I’m drunk.” Instead, he finds more interesting ways of getting the point across.

Considering the fact that there are only three issues to go and there’s a hell of a lot of ground to be covered as per the comic’s description, I can’t wait to see what else is in store for Sonny Gibson. Pick it up for the art but stay for the story. And don’t worry, it won’t be too long; at four issues, you really can’t even argue that you don’t have the time.

The Geeked Gods Score: 8/10. Gritty, awesome illustrations compliment a compelling story in a miniseries that is sure to be a favorite in the crime genre.