The Living Daylights at 30: A Retrospective By John Saavedra 1987 was a year of uncertainty for James Bond 007. After 12 years and seven installments, the franchise had...
by John Saavedra June 27, 2017 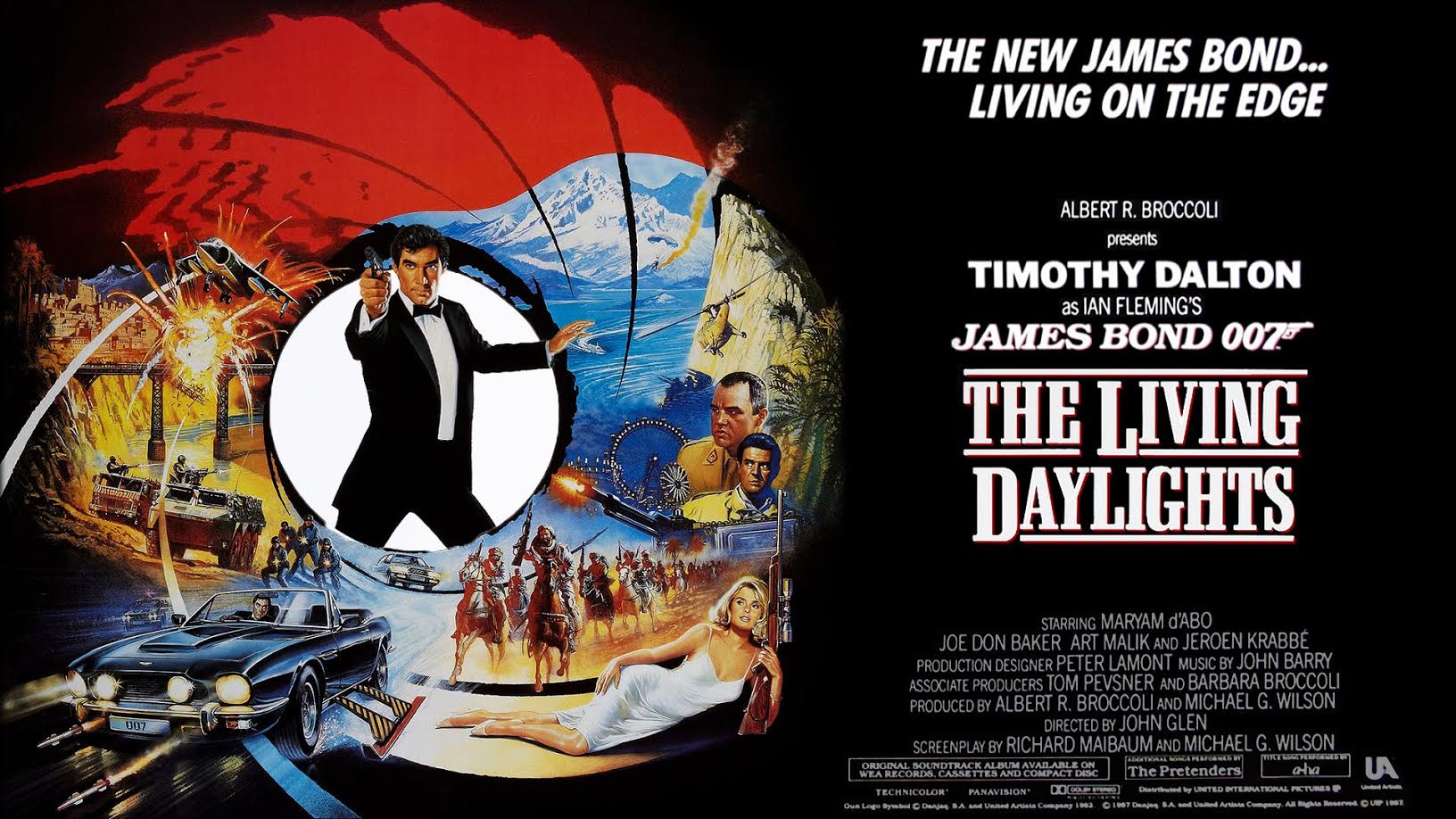 1987 was a year of uncertainty for James Bond 007. After 12 years and seven installments, the franchise had finally parted ways with the inimitable Roger Moore and was preparing to welcome a new Bond, the classically trained Timothy Dalton, who had initially been considered to replace Sean Connery years earlier. Eon Productions hoped that Dalton could revitalize the franchise after Moore’s last film, 1985’s A View to a Kill, received a cold reception.

Moore was a bit long in the tooth by the time he left the role, and according to some critics, it really showed. Interestingly enough when Eon held auditions for the new Bond, at least two other actors were considered for the role. John Glen, who was to direct the next Bond film, was particularly impressed with Sam Neill, who you all probably know as Dr. Alan Grant from Jurassic Park. Producer Albert Broccoli was not as impressed with the actor. 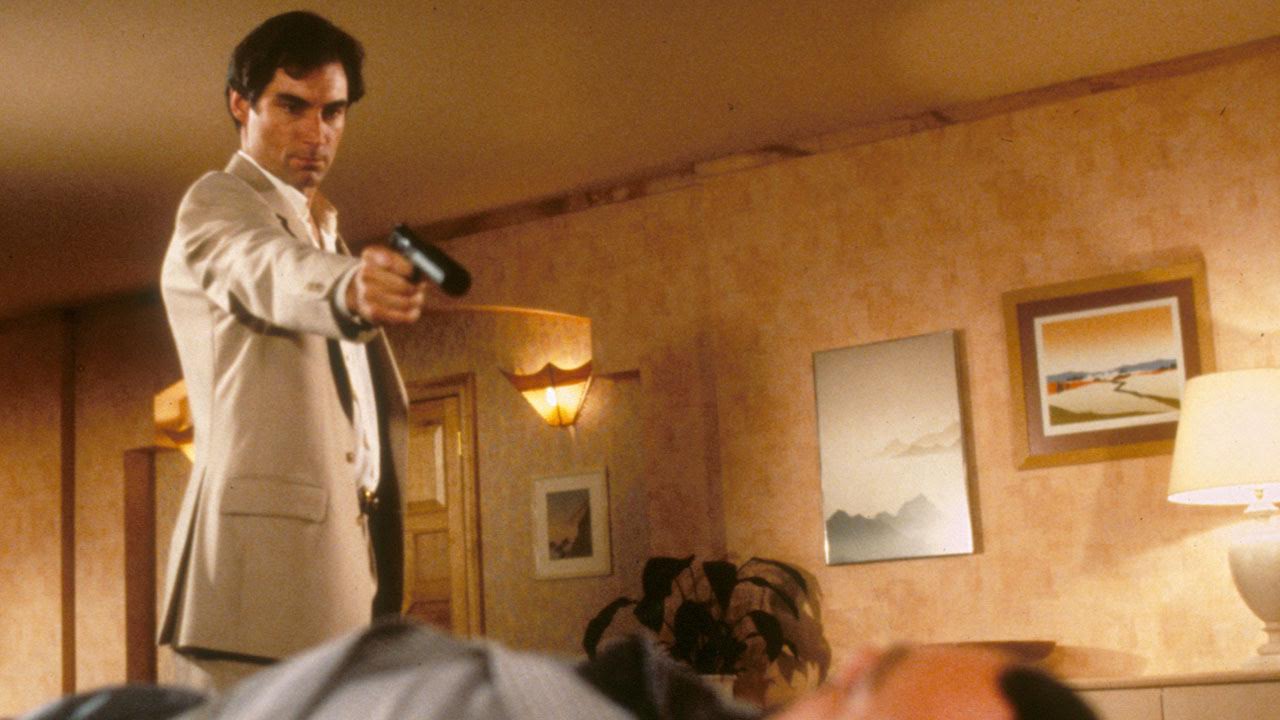 Funnily enough, Broccoli’s choice was Pierce Brosnan, who would go on to play Bond a few years later in 1995’s GoldenEye and three more sequels. It was not meant to be in 1987, though, as Brosnan was tied to NBC for a few more episodes of Remington Steele, which received a huge boost in viewer interest when the Brosnan Bond rumors started to fly.

Eventually, it all came back to Dalton, who played Bond for two films: ‘87’s The Living Daylights and ‘89’s much darker and violent License to Kill. The first Dalton Bond, though, was an interesting transition piece, playing both sides of the spectrum — the campy Moore years and the much more straight-faced Brosnan movies. 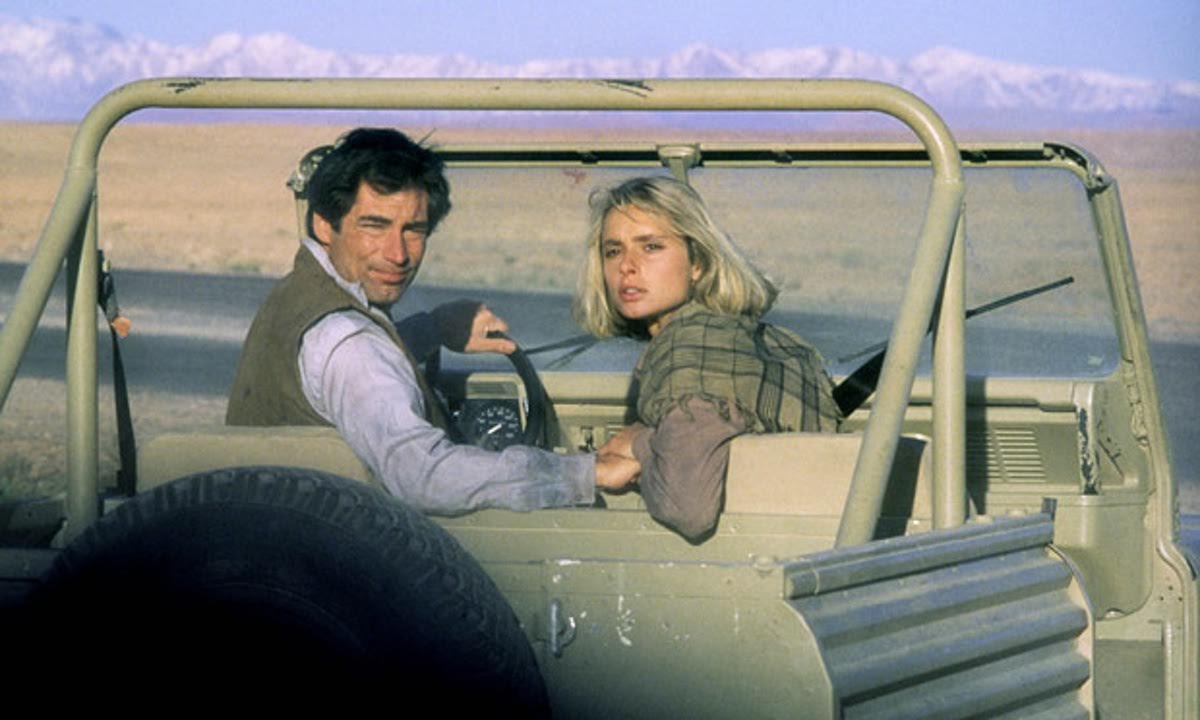 While Dalton was decidedly more serious in the role and didn’t really go for humor, some of the situations in The Living Daylights are just plain hilarious. After all, this is the film that brought us milk bottle bombs and cello case sledding, two moments that make this Bond entry unforgettable.

The Living Daylights was the last Bond film to be based on one of writer Ian Fleming’s stories until 2006’s Casino Royale. In fact, the first act follows Fleming’s story pretty closely. 007 is assigned to protect General Georgi Koskov (Jeroen Aart Krabbé), a KGB officer who has decided to defect from the Soviet Union, as he makes his escape from a concert hall in Czechoslovakia and into Austria. British intelligence fully expects an assassin to try and stop Koskov from leaving the country, and they’re sure the operative (known as “Trigger” in the story) will strike as the general leaves the concert hall. 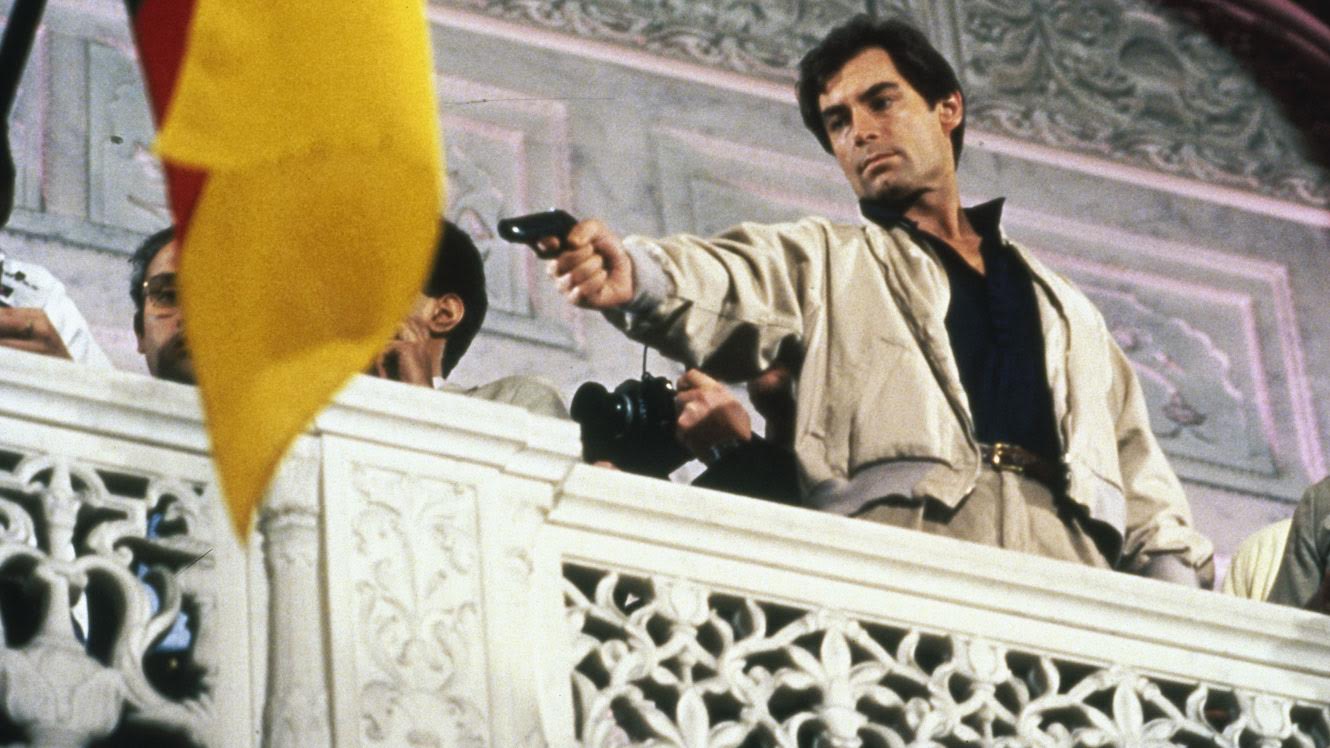 Bond sets up a sniper position across the street and waits for the assassin to reveal himself. In one of the more captivating moments of the film, Bond discovers through the scope of his sniper rifle that the assassin is in fact a beautiful cellist he’d admired only a few minutes earlier in the concert hall. As she’s about to take a shot at Koskov, who’s making his way down the street, Bond is ordered to kill the assassin. In a last second decision, he shoots the butt of her rifle, preventing her from making the kill.

The professional assassin actually turns out to be not so pro. In fact, she’s really just a cellist named Kara Milovy (Maryam d’Abo), who’s trying to help her boyfriend escape the Soviets. It’s later revealed that her rifle was loaded with blanks and that her “attempt on Koskov’s life” was really a trick to make the general’s defection look more believable. It all turns out to be a ruse by Koskov that’s way too convoluted to really get into.

The plot really is one of The Living Daylights big weaknesses. It just doesn’t make much sense, as the web of lies and deceit spins itself out of control. Perhaps the issue is that the film lacks a center of gravity, a villain for James to set his sights on. 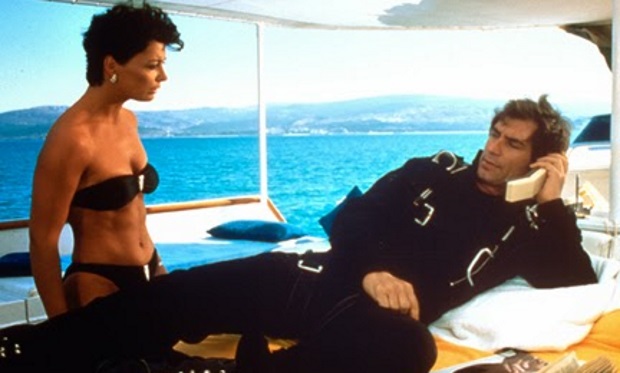 By the end of the movie, it’s unclear who the movie’s main antagonist really is. Sure, the film points to American arms dealer Brad Whitaker (Joe Don Baker), who fashions himself a general although he’s never actually served in an army. Yet, the movie gives so little time to Whitaker’s demise that he almost seems like a footnote — the last remaining story thread that needs to be tied up.

Koskov, on the other hand, turns out to be a capitalist coward who just wants to make a quick buck and chill by a pool full of beautiful women. His scheme is to broker an arms deal between Whitaker and the Soviet Union to aid in their fight against the Mujahideen rebels in Afghanistan (the Soviet-Afghan War didn’t end until 1989). When that deal falls through, Koskov decides to get into the drug smuggling business, buying a large shipment of raw opium from the Mujahideen. Koskov intends to get rich quick any way he can. He’s less Blofeld and more pesky nuisance.

The climactic fight of the film really belongs to James and the obedient henchman Necros (Andreas Wisniewski), who’s the most imposing presence in the movie and a not-so-subtle clone of From Russia with Love’s “Red” Grant — only more ‘80s. Necros’ final scene is the best in the film, as James and the villain try to kill each other while hanging out of a military cargo plane. It’s exhilarating, vertigo-inducing action, that still has you on the edge of your seat years later. I really admire that in a Bond movie, when it can trick you into thinking 007 might finally meet his end, despite the fact that will never be the case.

Dalton is a fine Bond. Perhaps a little dull, and definitely a bit less willing to have fun with the character, but he’s got the look and the charm. He’s just not very charismatic. But I think Eon was probably more interested in casting someone who looked believable in action sequences, after Moore was criticized for his age (he was 57 by the time A View to a Kill arrived in theaters). Dalton does look good holding the iconic Walther PPK and hanging off the roof of a speeding jeep.

Kara gels less successfully as the Bond girl. Thirty years later, I find her character a bit problematic. This young cellist is portrayed as a naive girl who gets pulled every which way by the men, and she lacks the toughness of some the franchise’s better female co-stars. Koskov tricks her into thinking he’ll come back for her, James tricks her into thinking he works for Koskov so that she’ll lead him to the general, and then Koskov tricks her into revealing James’ plan. She never really questions the men, and that’s something all of the main Bond women should do. 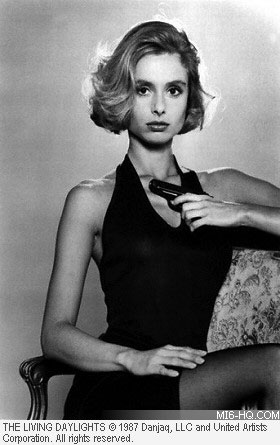 There’s a scene in the final minutes of the movie where she rallies the hesitant Mujahideen to help James attack a Soviet air base, but this plays more to the character’s naivete than actual leadership skills. Even Kamran Shah, the leader of the rebels played by Art Malik, simply mutters, “Women,” as Kara chases a Russian convoy on horseback. She’s not recognized for her bravery, but for what Shah interprets as impulsiveness. Kara is belittled several times during the film, and she never really stands up for herself.

It’s a big disappointment, considering that her initial setup as a cellist turned assassin is so intriguing. More could have been done with her character — perhaps even a villainous turn where she reveals that she really is a trained killer. That would have been a much better payoff for her character than just staring longingly at James every time he bats an eye at her. The Living Daylights has definitely not aged well in that regard. (There’s also the very questionable remark about a boombox weapon called the “Ghetto-blaster” that borders on racist.)

This was the last Bond movie scored by the legendary John Barry, who worked on 11 of the films between 1963 and 1987. His final score is a bit of a mixed bag, unfortunately. While it contains several fine pieces of music, such as the orchestral version of a-ha’s theme song — which I consider to be one of the better Bond songs — and the themes tied to the Mujahideen and Afghanistan. The score is also notable for incorporating a bit of ‘80s synth, which sounds a bit cheesy today but maybe got the audience head-bobbing in theaters. 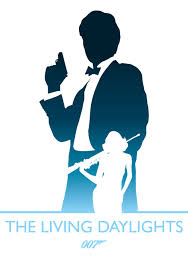 In the end, my favorite thing about The Living Daylights is that the characters don’t end up where you thought they would, a quality characteristic of some of the better Bond films. From Czechoslovakia to Austria to joining up with the rebels in Afghanistan, Dalton’s first adventure is a wild ride all the way through, even if it ultimately doesn’t make much sense. But what more can you ask from a movie that has a scene where a henchman disguises himself as a milkman, infiltrates an MI6 safe house, and assaults the place with nothing but a pair of headphones and a couple of exploding milk bottles? At its very best, The Living Daylights is just mind-numbingly fun.