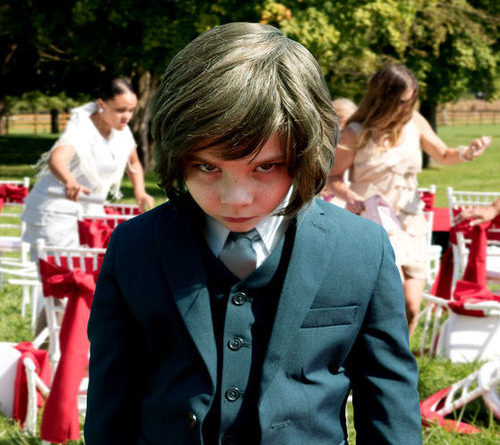 You may or may not remember a movie from 2010 called Tucker & Dale vs Evil, and if you don’t, that’s forgivable. It’s not extremely well-known outside the horror community. But for those who have seen it, it’s one of the hidden gems in the realm of horror comedies. With buckets of blood and an equal amount of heart, the 2010 film is a must-watch for those who need a little gore with their laughs.

The film was writer and director Eli Craig’s first film as a writer and director, and fans have been waiting patiently for his next move. So when it was announced that Craig had teamed up with Netflix for a new horror comedy starring Krampus’ Adam Scott, expectations were understandably high. After all, Scott had just proven himself to be a formidable name in a horror comedy with the aforementioned film, and anyone who has seen Tucker & Dale became a fanatic of the movie almost instantly.

Little Evil is a film about Gary Bloom (Scott), who has just gotten married to Samantha (Evangeline Lilly). Gary feels a disconnect between himself and his new stepson Lucas (Owen Atlas), and for good reason. No, it’s not because Gary isn’t his “real dad”. It’s because there’s a strong possibility that Lucas is the Antichrist.

Gary’s having a very hard time adjusting to this concept and even goes to group counseling with other stepfathers who have issues with their stepchildren. It becomes just a little harder than he expected to explain that, even though all of the men seem to think their stepchildren are evil, Gary’s actually is. Even worse is that in every situation that could possibly convince everyone that there is something very wrong about Lucas, Gary is blamed. Go figure.

Little Evil has an extremely funny script, great acting, and a level of charm that is expected from Craig given his previous offering. It’s a very funny film with a lot of real emotion despite the outlandish concept. And though it’s billed as a horror comedy, there’s not much horror to be found in Little Evil.

It’s not this is such a bad thing; standing on its own, Craig’s latest film is nothing short of a blast. But it’s just so hard not to lament the lack of blood, guts, and screaming terror that was found in Tucker & Dale. Not even one arm gets severed! Come on, Craig, what gives?

Jokes aside, it does come off as being a bit disappointing. It’s simply due to the fact that his feature film debut isn’t just a good movie; it’s one of the best horror comedies that the genre has to offer. Ask anyone who’s seen it; you’d be hard-pressed to find someone who disagrees. It was gory, intense, hilarious, and extremely evil. Little Evil is a cute movie that I would absolutely recommend, but if you don’t watch it, I won’t be tempted to cut you up with a chainsaw. You’ll probably like it. I did. But will you love it? Will you be tempted to watch it again and again? Eh, maybe.

Oh, and by the way, it’s totally awesome how close Lucas’ appearance is to Angus Young. Height and all!

Little Evil is currently streaming on Netflix in the US.