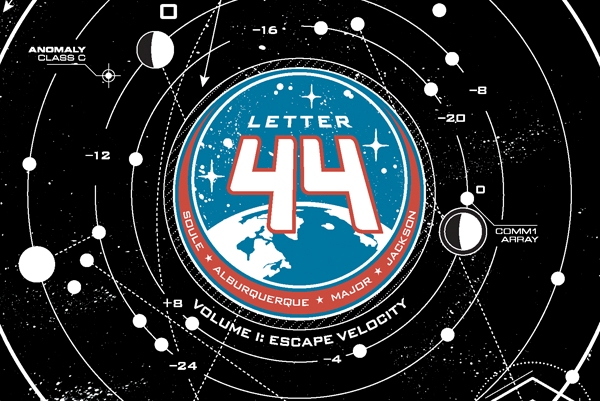 It’s something that’s been the subject of many, many comics before Letter 44. No, the concept of astronauts encountering something extraterrestrial while outside of Earth’s orbit is certainly nothing new, but that’s not a bad thing at all. It seems all-too easy to create a story about space travel, but making it interesting is the hard part – which is something that Charles Soule’s Letter 44 does very well.

In the first volume, Escape Velocity, the story is carried by two different perspectives: The Earthbound story, and the interplanetary story. Stephen Blades, the 44th president of the United States, holds the narrative for everything on the terrestrial front. Hours before his inauguration, he finds an envelope addressed only to “44”; inside, a letter written by the 43rd president is contained, explaining that everything he has done throughout his presidency, “mistakes” and all, were all due to the fact that something has been found in outer space. The second narrative is seen through the eyes of the crew of nine Astronauts that were sent out to explore this being, found by NASA seven years ago. 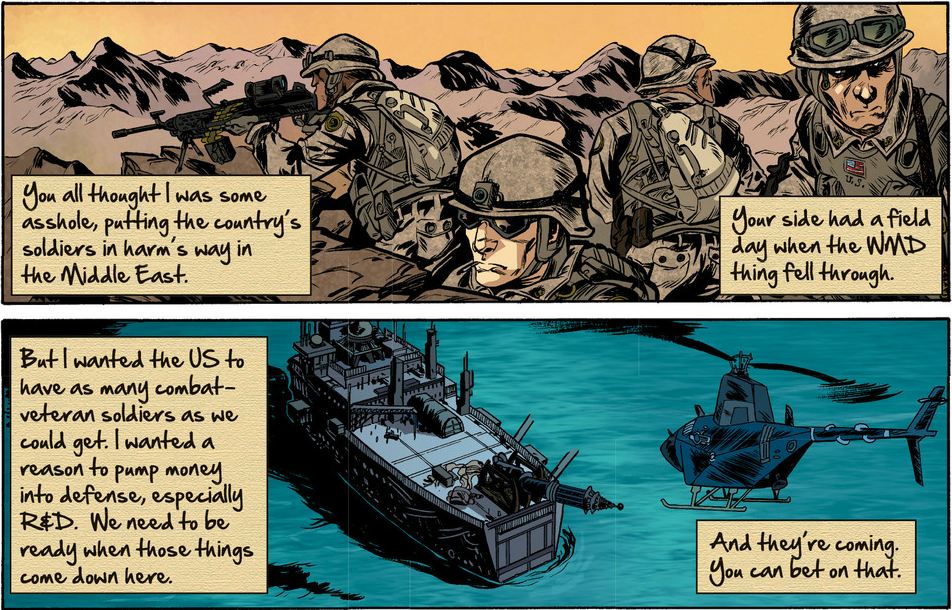 Soule does an excellent job at creating a compelling atmosphere right from the start without including anything too fantastic; instead of kicking the story off with some epic space battle, we are looking in on Stephen Blades just hours before his inauguration. He is a man tasked with cleaning up the mess that our former president has left behind (a little familiar, hmm?) and seems like someone who this country could really depend on. Blades is gruff yet reasonable, strong yet understanding, and overall, compassionate. He’s not a complex character by any means; instead, he’s simply an extremely likable character – and given a choice between the two, I’d choose a character that is interesting to read about any day over one who is plagued with unnecessary complexities and hardships. Blades is a strong leading man, wonderfully written by Charles Soule.

Deep in outer space, this crew of astronauts gives us a very different aspect to the story; they’ve signed a one-way mission, complicated tenfold by a pregnancy onboard. Letter 44 keeps things interesting by giving these characters depth, and including some insight into the way that they live their lives – even their perspectives on sexual relationships. It’s done in a tasteful and rational way, far from giving the reader anything gratuitous or unnecessary. Details such as this make the crew more believable – after all, they’re in space and most likely never coming home. In order for this story to succeed, we’ve got to see them as more than just astronauts; we’ve got to see them as very human…and thankfully, we do. The crew aboard The Clark is a crew that the reader will surely learn to care about very quickly. 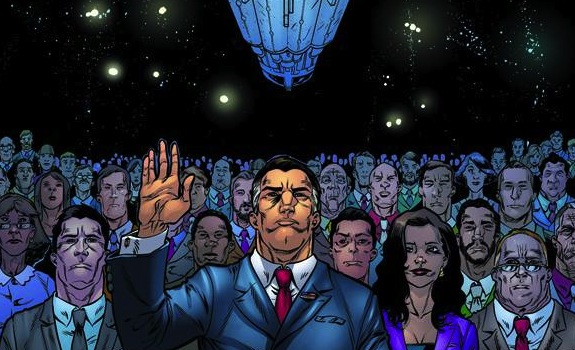 The story, much to my pleasure, is very dialogue-heavy. It’s too common to see science fiction tale go off the deep end way too early without explaining anything or really giving any weight to the people involved. Letter 44 retains an air of mystery while also explaining just about everything that Blades knows as the story goes along, giving us the same amount of insight that the president has, but only as he learns it. It’s a very smart way of holding a story and keeping it believable.

The art in this first volume is beautifully done and very intricate. Alberto Alburquerque does an absolutely fantastic job in bringing Soule’s story to life, giving his characters all very believable and very beautiful depictions. However, the coloring job is where Letter 44 truly stands out. From the deep blacks of space to the vibrant colors which can be found later in the story, Dan Jackson and Guy Major both help to add a serious “wow” factor to the book. It’s like watching a BluRay, and afterward, most other comic books may seem like they’re still only at DVD level. The entire presentation of this first volume is astounding, right down to the shimmering front and back cover that encapsulate these first six issues.

The political story is clearly an allegory for the time period on earth in which it was written. Take it or leave it, it’s there. To some, it may be a little too obvious, but I found it to be an insightful little piece of political commentary while also possibly making some very otherworldly explanations for the president’s behavior. Both aspects of Volume 1 are equally important – the astronauts and the politics – and I hope to see this trend continue in future volumes. Letter 44 should not be missed by anyone.