Know Your Roots: The Original Fallout PC Game   War. War never changes. Except when it does. Which is exactly what happened when the Fallout series got ported into... 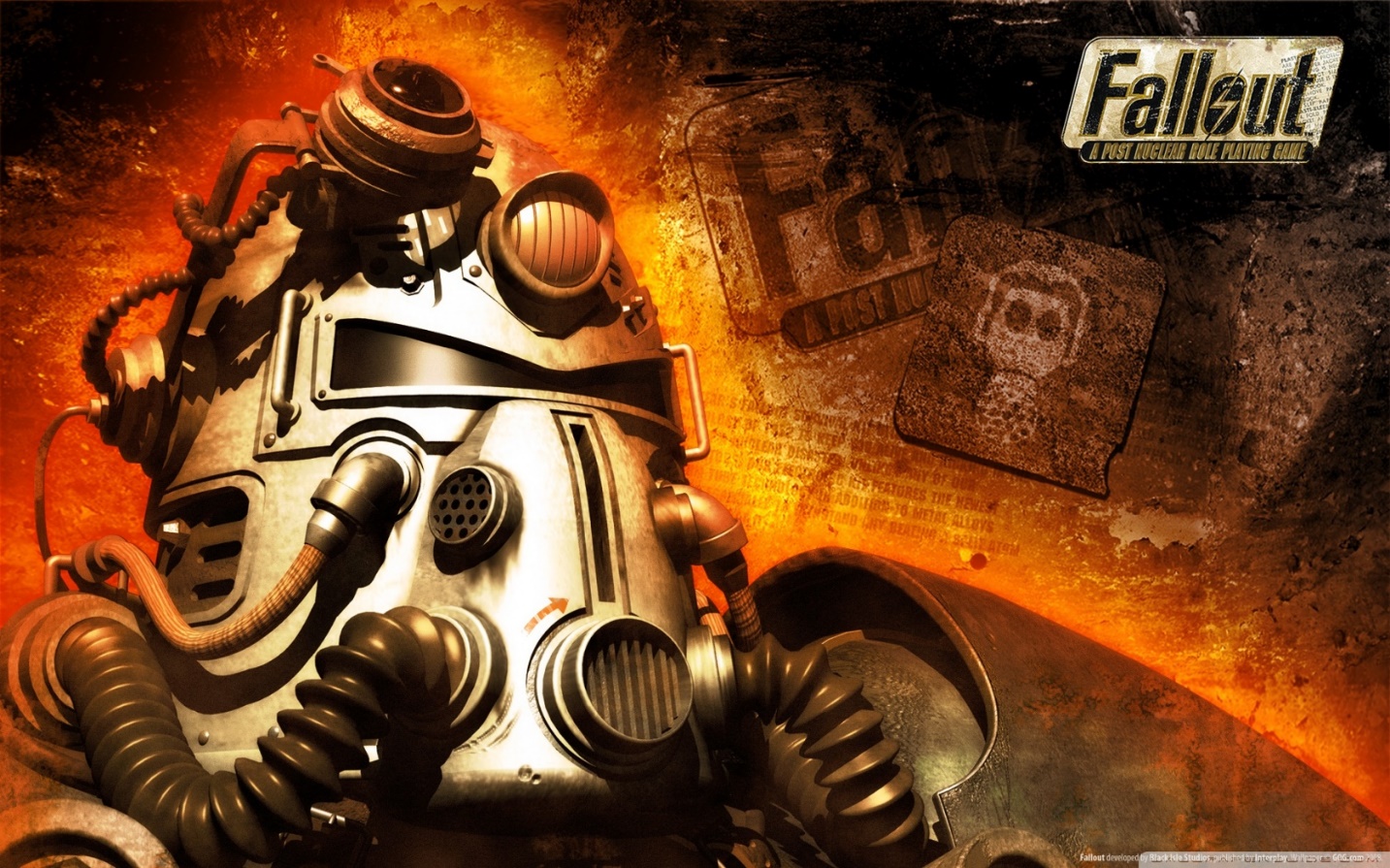 War. War never changes. Except when it does. Which is exactly what happened when the Fallout series got ported into the next generation of computer and console gaming, into a world populated by first person shooting and V.A.T.S. targeting systems. Gone are the days of the now-forgotten point-and-click adventures of The Vault-Dweller, traded in for a slicker, more accessible wasteland. And Karma? What’s that? Players who are getting their start on the Fallout franchise with the latest entry, Bethesda’s Fallout 4, are only getting but a glimpse of what it truly means to survive in the post-apocalyptic, retro-futuristic world of a nuclear war-torn America. Let’s take a walk down memory lane to where the franchise got its start: 1997. 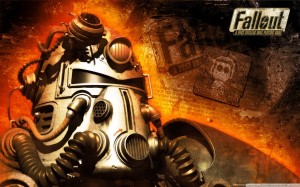 Close to twenty years ago, Interplay Entertainment released a true gem of a video game onto the world; Fallout. In it, you play as an inhabitant of Vault 13, tasked with the mission of finding a new water chip for the vault. This water chip is responsible for giving the people of Vault 13 clean water, and without it, in 150 days there will be no more clean water, thus resulting in destruction and death for the people you’ve known and loved your entire life. In the original games, before any patches were made, the 150 hours aspect made it so that the game was timed; if not completed in a certain timeframe, the game would end, everyone in the vault would die, and it would be your fault.

This caused many people upon its release to beat the game as soon as possible and forego most of the wonderful side quests that the Fallout universe is known for. Thankfully, the first patch (version 1.1 of the game) made the limit higher, up to 13 years, so that players can go off into the wastes and do as they please, experiencing everything that the game has to offer without worrying whether or not the game is going to end before they’re good and ready. This version is the one that you will get if you download it off Steam, which, by the way, you absolutely should do after reading this.

The beauty of the game truly lies in the grim atmosphere that surrounds it; something that newer installments, such as 3, New Vegas, and 4 all pale in comparison to. True, there are some very dark moments, but the sense of impending doom simply has not been able to be replicated since the second installment of the franchise. There’s just something about seeing the characters as ants through a microscope, devoid from any compassion or true goodness, so much more threatening than when you get to see everything up close with colorful spoken dialogue. There is much more of an emphasis on story and true roleplaying in the original Fallout. Southern California is much more of a threatening and uncaring environment than anything that’s come since. I find it to be much more cerebral than the newer games in the series; the combat is all turn-based, forcing you to think each action through and develop a good strategy. It’s not so much, “grab a rocket launcher, rely on V.A.T.S.” Weapons are incredibly scarce, as is food and supplies to aid you on your journey. It’s tough. Very tough. 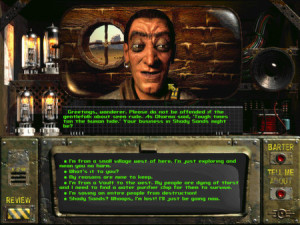 The humor is much more dark than anything that’s come since as well. The first Fallout was just absolutely bizarre. Once again, the entire visual aspect of the game, and seeing things from a seemingly outside perspective due to the camera, makes everything so much more disconnected. Seeing someone’s internal organs explode right out of their body from a distance from a character who seems to have absolutely zero qualms about doing so is disturbingly funny.

Another strength in the first game is the soundtrack, and no, I’m not talking about any cheery 1950’s (or earlier) happy-go-lucky tunes that are all-too common in later entries. Instead, here we have a truly scary atmospheric soundtrack that is best listened to through headphones. It relies on subtlety as opposed to the contrasting happiness found in the soundtracks in the games that you’ve probably got your start on. I do love the contrast, but after playing this game, I had a tendency in more recent playthroughs of the newer games to turn the radio off and let the atmosphere do its own thing. I think it makes for a much darker game, something you had no choice about in the first one.

Also: Karma. Why is it gone from the fourth game? I love the newest game, there’s no denying it, but I cannot understand why they would take one of the biggest tools in your character’s development. There is no real morality in 4; no one cares if you steal and don’t get caught or if you kill someone for pure fun. I felt that your character’s reputation was an excellent addition to a roleplaying game, and excluding it from the series is a serious detriment to it. If you’ve never played anything beside the fourth one, you may not know what you’re missing, but if you got started on an earlier game, it’s a real letdown. 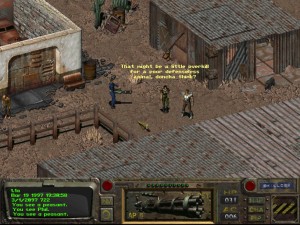 Don’t let the different game style be a turnoff for you. If you’re a fan of the more recent games, I would absolutely recommend you going back and playing the first, and then the second. There are some really great things that you can pick up on if you’ve already played 4, such as Mr. Handy and even Dogmeat. It’s so cool to see things that by now you’re completely familiar with in a different environment. As a fan of both Fallout 4 and the original Fallout, it is my sincere opinion that any player of this franchise should go back and experience the game in its rawest form. If you like story-driven, dark RPGs, the first game is something to cherish and play all the way through at least once. You can purchase it from the Steam store for under 10 dollars…so really, you have no excuse not to.

Nerdy Gift Ideas When ThinkGeek Doesn’t Have What You Need