This is what cocaine does, people. 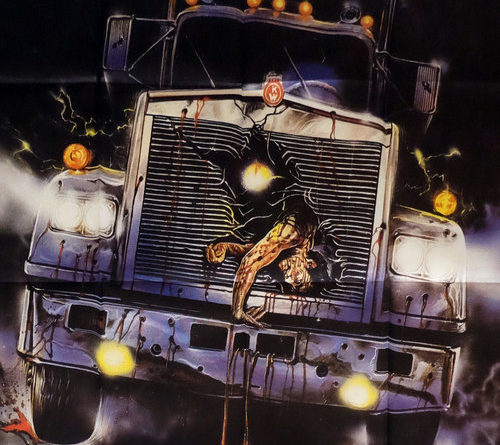 Stephen King, for such a prolific writer, has made some terrible choices throughout his career. This is never more apparent than in Maximum Overdrive, a 1986 film that he wrote and directed based off a short story called Trucks. It’s scored entirely by AC/DC. It’s not good. At all.

Why he chose to do it about killer 18-wheelers coming alive and killing people can be blamed on one thing and one thing only: cocaine.

Yes, in the years since the film’s release, the horror writer himself has acknowledged the atrocity that this film really is and admitted that he was so high on cocaine that he didn’t actually fully know what was going on. It has way too many ideas stuffed into it to make anything coherent. It’s flawed in its pacing, it’s acting, and most importantly, Stephen King’s directing. There truly is nothing good about this movie.

On top of the astoundingly bad visual aspects of the entire ordeal, Maximum Overdrive also has Angus Young’s screaming guitars and Brian Johnston’s anguished wails blasting from the speakers the entire time. It’s just crazy. How could you make something like this up? I don’t have enough coke in my system to make sense out of any of this nonsense. It’s just ridiculous through and through.

The concept is fine enough for a short story but is way too silly to ever be executed properly on screen. A comet passes by earth and brings with it a mysterious force that turns all electronics sentient for a little over six days. During that time, a group of people must hole up in a North Carolina gas station and find a way to survive this madness.

Look, I love bad movies. I love Sleepwalkers. I love The Room, Troll 2, and I love Ghoulies. Those films are bad in such a particular nonsensical way that they actually become hilarious and charming. Maximum Overdrive just ends up being annoying and dull; it’s sort of like Birdemic, truly the worst movie ever made in the worst possible way. The novelty of AC/DC wears off really quickly and we’re left with an hour and a half of aggravating screaming and poorly delivered lines.

It’s disappointing because the first half hour is actually really good – in a “wow, this is hilariously bad” kind of way. I love the scene when the kids on the ballfield are being massacred by a soda machine. And the watermelon truck spilling over on the bridge is stupidly funny as well. But after the movie has time to settle in and the plot really gets going (but does it ever really?), it becomes an absolute chore to watch.

I’ve found myself in a strange position. I’m complaining here that a movie is bad, but not bad enough. It’s just dumb; it’s not mind-numbingly bad. It’s just kind of annoying. I’ll stick to Tommy Wiseau, thank you very much.

Stephen King has never directed a film since. Thank God for small miracles.