Kill or be Killed Issue #3 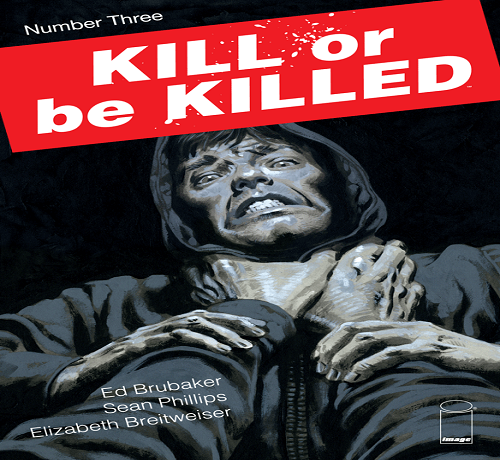 Kill or be Killed Issue #3 could easily be considered the “slowest” in the series so far. This is the first issue that doesn’t feature any on screen death and focuses heavily on Kira and Dylan’s relationship. While that might be enough to cause many violence-enthusiasts to remove this title from their pull lists- let me assure you, Ed Brubaker’s macabre rat race has not missed a step.

me assure you, Ed Brubaker’s macabre rat race has not missed a step.

This issue opens with Dylan and Kira chatting over coffee as Dylan recalls his first kill from issue 2. He distances himself from her for fear that his rising guild will cause him to confess, thus dooming him to a life of fighting off the sexual advances of his cellmate. 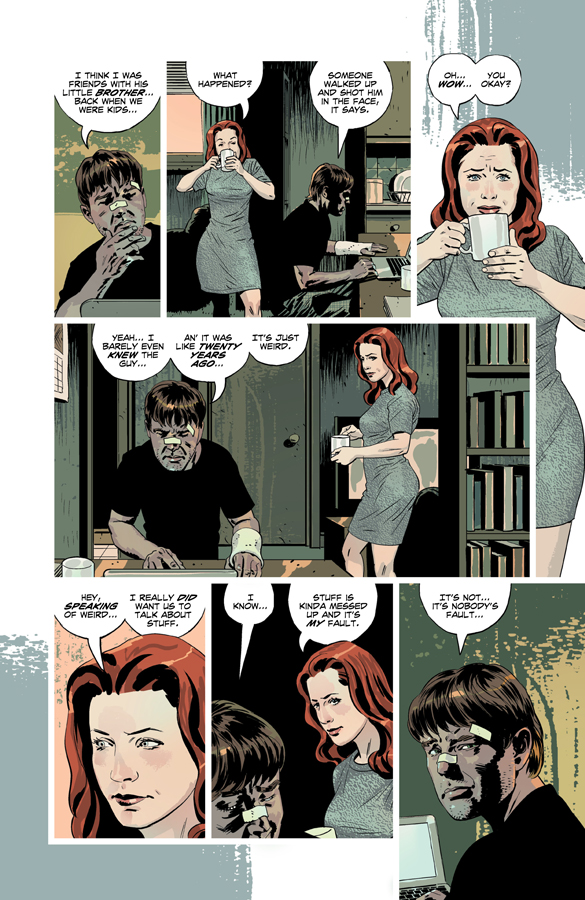 As Dylan attempts to will himself through his normal daily routine, he cannot help but continually perusing articles related to the murder. He begins to doubt himself as the line between reality and fantasy blurs. We learn that recently Dylan’s dreams have taken a sinister turn in which he walks through the city streets, seeing not people but a list of sins- people that the world would be better off without.

Dylan is then visited by the mysterious demon that saved his life in Issue 1. He taunts Dylan’s unwillingness to commit fully to his new role as a harbinger of death. We are treated to an image of Dylan contemplating the ski mask that he wore in the beginning of issue 1 (in which he slaughters a whole roomful of baddies). 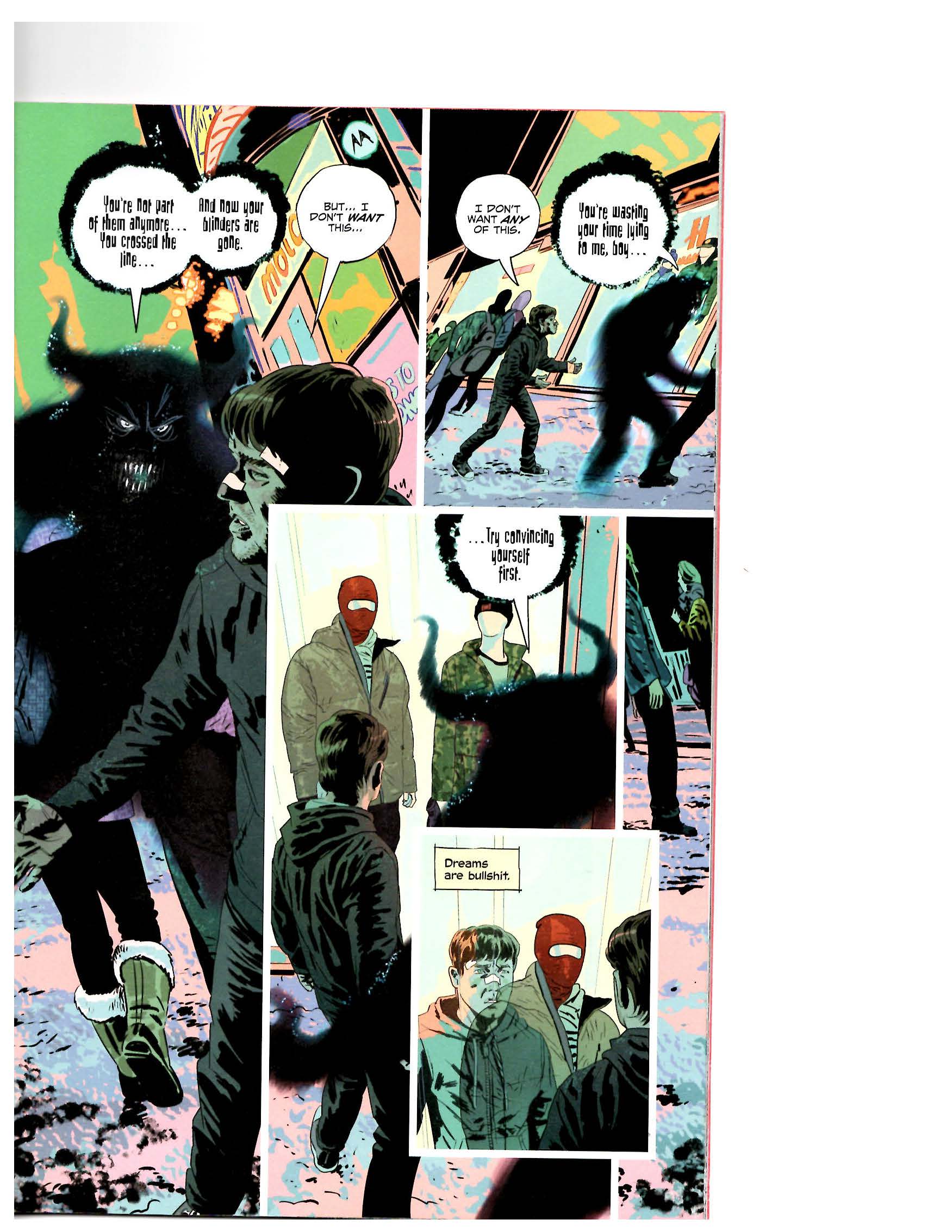 Upon waking from his nightmare (still unsure as to whether the demon is real or not) Dylan joins Kira for a date to Coney Island. They discuss the nature of their relationship and she admits that Dylan is the person she feels the most comfortable with, while Mason is the sensible choice for a partner. Dylan spends his time analyzing her tragic worldview, “She was mourning every beautiful thing she saw…like she could see the future coming, when they’d all be ruined or replaced or demolished.”

This scene offers one of the best examples of the amazingness of Breitweiser and Phillips’ collaboration. There is an image of Kira, frowning at Dylan, he brow furrowed in pity as she admits how little trust she has in herself. Breitweiser managed to color in Kira’s fair completion with the perfect amount of redness. It really conveys the frigid winter day that they’re walking through.

After we learn more about Kira’s upbringing and her having grown up with a mother that mirrored the personalities of her partner in every serious relationship in which she’d ever been involved. This caused Kira to be exposed to a multitude of ‘swinger’s parties’ at a young age and (in the mind of Dylan) caused her to grow up with a different view of sex and relationships than the average person.

After Dylan learns that his memories of Teddy’s brother were in fact correct, after he receives a breaking news alert that the bastard was involved in a child-sex ring. Vindicated Dylan continues his date with Kira and the pair awkwardly made out in the back of an Uber (totally trash move, Dylan). 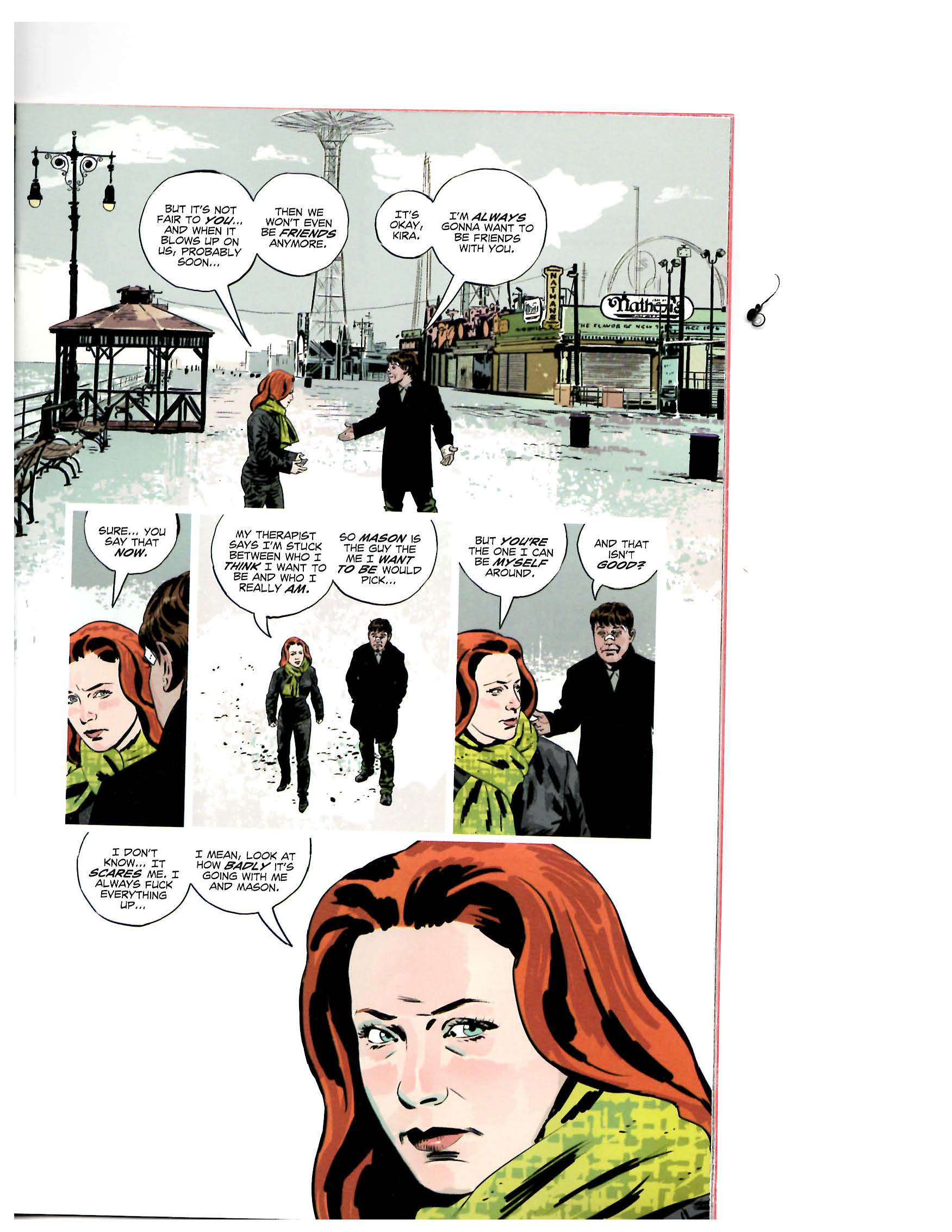 After Mason returns early from his business trip things return to relative normal (at least as normal as they can be in an apartment occupied by the angles of a love triangle). And Dylan, with new resolve, begins searching through the local police blotter for his next kill.

This issue, despite the distinct lack of action, easily stands aside the previous two installments due to its beautiful surrealism, crushing realism and the self-awareness of its characters. The bottom line is that Kill or be Killed continues to impress with its consistently strong storytelling and characters brought to live through the work of an incredible artist/colorist team.