Just the Facts—Thunder Cats HOOOOOOOOOOO! by Ashish @thatguyash1018 Remember these facts are for entertainment purposes, if you don’t like them don’t read them… Anyhoooooooooo here is  Five facts about...

Remember these facts are for entertainment purposes, if you don’t like them don’t read them…

Anyhoooooooooo here is  Five facts about the Thundercats…. 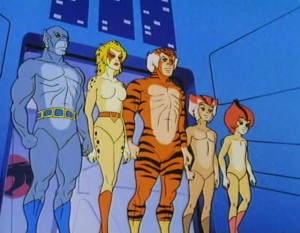 The first episode of thunder cats we see that the Thundercats are all naked except for wearing boots… Really Boots….I guess your feet really needed protecting …Have you ever stepped on a lego… That shit hurts….

So there was an explanation… Jaga the leader said that they didn’t need protective weaponry and clothes on Thundera”…. WTF what kind of place is this……… Well, Cheetara is running around naked so, I am okay with it.

I am not going to even discuss where certain male anatomy is….. NO, I AM NOT GOING TO DISCUSS IT no you can’t make me…….moving on.

It’s kind of funny but didn’t the Cosby show have a billion grandpa’s seriously like everyone was a grandpa….. But the Actor who voiced Panthro Earl Hyman played Bill Cosby’s dad on the Cosby Show….

Check out this Video

Turns out Jaga got the Sword of Plun-Darr and rather than destroy it or keep it somewhere, where it wouldn’t harm the planet, he threw it into a volcano which destroyed planet Thundera. WTF so the whole Thundercats saga could’ve been prevented if he just locked up the sword. Wait, WTF you mean Cheetara would still be naked on the planet, I hate Jaga ……. 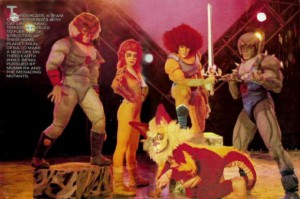 Well not on ice but did you know that with the success of Thundercats the Thundercats did arena shows with….. Gumby… Wait, Gumby and the Thundercats don’t go together well they do if their parent company owns both properties……. It makes Sense… 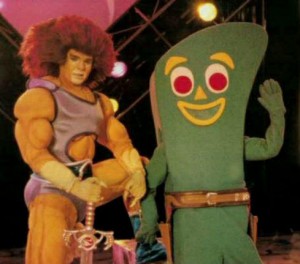 Am I the only one who is afraid of Snarf in the picture…. Seriously that would’ve given me nightmares as a kid……

There you have it Five Facts about the Thundercats….

Urban Dictionary defines a Snarfer as someone who Farts in a bathtub and tries to eat the fart bubbles.