Welcome Back to the Jedi Archives, today we take a break from the minutia of Star Wars lore to take a look at some of the best books that have come out since Disney rebooted the Expanded Universe.

10 Battlefront: Twilight Company,  by Alexander Freed – 2015’s  Battlefront reboot was a disappointment to many fans of the classic games. Twilight Company acted as the story campaign the game never had. It follows the story of a group of rebel soldiers during critical across the entire timeline of the original trilogy. A brutal planet-hopping journey, Twilight company is story unlike anything else available in current Star Wars lore.

9 Star Wars: Lords of the Sith, by Paul S. Kemp – One of many novels taking place in-between Episodes III and IV, Lords of the Sith puts the focus directly on Darth Vader and the Emperor during a rare mission they undertook together. Taking place mostly on the Twi’lek homeworld of Ryloth, we follow the two Sith lords as they attempt to crush a growing resistance led by none other than Cham Syndulla. Lords of the Sith gives readers insight into Palpatine’s methods of manipulation and shows how conflicted Vader truly was during the early years of the Empire. Lords of the Sith is a fun read for anyone who wants to know more about the most iconic villains in Star Wars.

After the untimely cancellation of Clone Wars, many story threads were left unresolved. Ahsoka helps to give a resolution to the story of Anakin’s ill-fated padawan Ahsoka-Tano we meet her on the run and broken down a year after the events of Revenge of the Sith. Throughout the book, Ahsoka learns what her new place in the galaxy has to be and find it in herself to grow into the strong leader we meet when she first appears in Rebels. This book is was written for younger readers, but don’t let that scare you away, anybody who loved Clone Wars should find this book to be an enjoyable read.

7 Star Wars: Dark Disciple, by Christie Golden – Based on unused scripts from the Clone Wars, Dark Disciple wraps up the story of Asajj Ventress. During the height of the Clone Wars, the Jedi have decided that the only way to end the war would be to assassinate Count Dooku. Jedi Knight Quinlan Vos recruits Ventress, Dooku’s former apprentice and they embark on a journey to take down the fallen Jedi turned Sith Lord. Part thriller and part tragic romance, Dark Disciple, turns a sympathetic light on one of the most prominent villains of the Clone Wars. 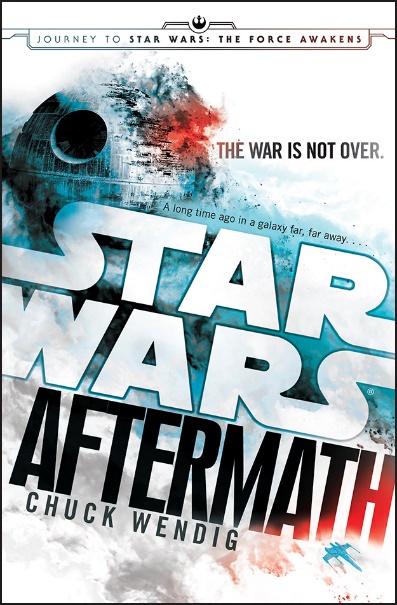 6 The Aftermath Trilogy, by Chuck Wendig – Technically the third book in this trilogy, Empires End doesn’t come out until the end of February but the first two books, Aftermath and Life Debt respectively are well worth your time. Aftermath starts about a month after the end of Return of the Jedi and follows a newly formed team of heroes tasked with tracking down and arresting imperial war criminals. Many familiar faces weave their way throughout this series including Wedge Antilles, Mon Mothma, and even Bail Organa. By far the best part of this book is the inclusion of imperial admiral Rae Sloan through her eyes we see the beginnings of the First Order through the eyes of a true believer in the promise of the Empire. Witnessing the final days of the Galactic Civil War has been an exhilarating ride thus far, and I for one can’t wait to see what becomes of the Wexleys and their team of misfits next.

5 Star Wars: Tarkin, by James Luceno – Veteran Star Wars Author James Luceno returned to the series with Tarkin, a story of the complete life of Grand Moff Tarkin in the days leading up to his death on the Death Star. Luceno is excellent at writing villains, and it shows here with Tarkin being every bit as cold and calculating as we ever, though. We also get to learn about his relationship with the Emperor and see how he forms a begrudging alliance with Darth Vader. While not exactly a sympathetic character, reading Tarkin will change the way you see him in the films.

4 Star Wars: A New Dawn, by John Jackson Miller – Written as a prologue to Rebels, A New Dawn introduces us to Kannan and Hera at their first meeting. When we meet Kannan, he is a broken man, completely removed from his Jedi roots who struggles to stay unnoticed in a galaxy that wants him dead. Through the course of the story, we see how his accidental meeting with Hera helps him to find a new place in life where he can do some good. Though the sinister efforts of Count Vidian, we get to see the evils of an Empire willing to do anything to accomplish its goals. We also get our first glimpse at a young Rae Sloan.

3 Catalyst (Star Wars): A Rogue One Novel, by James Luceno –  A prequel to Rogue One and Tarkin, Catalyst is a fascinating character piece that follows Galen Erso and Orson Krennic as their paths diverge during the Rise of the Empire. You’ll learn all about the extreme lengths that were reached to ensure the Death Star’s construction. Erso’s struggle to make a living without using his scientific expertise for evil is tragic while seeing his old friend Krennic manipulate him for personal gain is equally heartbreaking. This book will give profound insight into who they are when these characters first arrive at the beginning of Rogue One.

One of the only books that approaches the timeline of the new  films, Bloodline is all about Leia and her struggle to save a fledgling New Republic. It’s a political thriller that isn’t afraid to get into the nitty gritty when talking about how the New Republic operates. Constant twists and turns are sure to keep things interesting with Senate bombing and the revelation of Leia’s relationship to Vader throwing her entire position into jeopardy. One wrong move and the New Republic could easily become the next Galactic Empire this book is a must-read for fans.

1 Star Wars: Lost Stars, by Claudia Gray – What happens when two lifelong friends find themselves on opposite sides of a war? Lost Stars tell the tales of the original trilogy from the perspective of Thane and Ciena, old friend and lovers who find themselves at odds when Thane joins the Rebellion. Ciena can’t turn her back on the only life she knows in the Imperial Navy for what she sees as a group of terrorists. We witness almost all the major events of the films play out from their perspectives and get to see an average imperial perspective on many of the perceived victories of the rebellion. Painting neither side as right or wrong, Lost Stars treats the complexities of war with a surprising amount of respect while still paying homage to everything that makes Star Wars What it is.

That’s all for now. Thanks for visiting the Jedi archives. Happy reading and may the Force be with you.

Richard Lynch: Richard considers himself to be a pretty well-rounded geek but first and foremost a gamer. With a love of everything from old-school Final Fantasy to Halo he knows his way around a controller. He is also a recent graduate of Purchase College where he majored in Media, Society and the Arts (don’t worry nobody knows what that means) with a minor in screen writing. He is excited to writing content for the Geeked Gods. Rich doesn’t check his twitter often but you can find him there and on Facebook.
2 Comments on this post.