I’ll never forget where I was the first time someone misappropriated the origin of the cut away gag, now most closely associated with the once-great Fox animated series Family...
by James O'Donnell July 14, 2017

I’ll never forget where I was the first time someone misappropriated the origin of the cut away gag, now most closely associated with the once-great Fox animated series Family Guy. I was in a really boring lecture and, for whatever reason, someone referenced the aforementioned joke style which caused the humorless professor to interject. She asked what her students were talking about and some mouth breathing neckbeard interjected from the back of the room, “It’s a thing that was invented by Family Guy where they reference something absurd cut away actually to show it.” 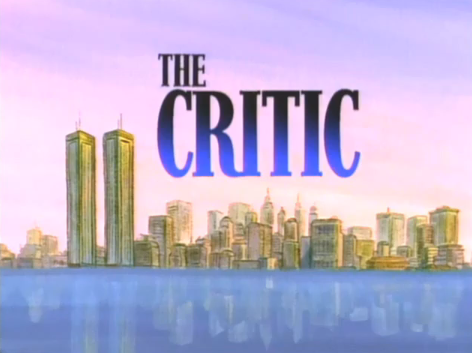 Channeling the vitriol of that moron that interrupted President Obama during the State of the Union back before the era I’m now dubbing “Mad Max Prequel Days” I leapt to my feet, pointing an accusing finger at him, “YOU LIE!” I shouted, “That joke style was invented by Al Jean originally of the Simpsons, but later perfected on the ABC/FOX show The Critic!”

That last part isn’t true. I really didn’t like talking to people in college unless thoroughly intoxicated, a tradition I have held into my adult years and will continue to do until my untimely death at age 49.

In order to atone for my lack of nerd-splaining that fateful day so many years ago, I’d like to offer four reasons you should stop what you’re doing and watch the critic right now on whatever device you have handy.

The Critic, originally picked up by ABC was created by the aforementioned Jean along with Mike Reiss and was produced by James L. Brooks (pro-tip: if you’re going to create an all time great show, starting off with the brain trust behind the best seasons of the Simpsons is the way to go). The show follows universally despised film critic Jay Sherman as he tries to raise his son Marty amid a colorful backdrop of 90’s New York.

Like The Simpsons and Futurama each episode opened with a fantastic montage, which began and ended with ever-changing gags. The sequence kicked off with some wonderful establishing shots of the city (or New York City for those of you that live outside of this wonderful hellhole) and panned in to Jay’s rude awakening, a joke that usually involved a mean phone call or unflattering broadcast highlighting the universe’s distain for the shows protagonist. The montage ended with a hilarious movie parody, which was punctuated by Jay’s catchphrase, “It Stinks!”

As you might imagine a sit-com about a fictional film critic relies pretty heavily on movie parodies. One of the best running gags on the show is Jay’s utter disdain for the absurd films that he’s forced to review. From the Arnold Schwarzenegger’s musical debut in Rabbi PI, to the original Jurassic Park 2; in which the raptors develop a sophisticated social order and devise a way to escape the island and integrate themselves into society, Jay hated them all and boy howdy do is it ever fun to watch him rip them asunder. There is a huge part of me that wishes Jean, Reiss, Apatow (yes that Apatow) and the other writers would get together and produce an actual modern day movie review series. Could you imagine Jay ripping apart the awful shit that’s been thrust upon society lately? Suicide Squad? They should have featured the hotline number during the credits as a benefit to the audience. It Stinks! Thor? More like Bore. How could a major studio waste the talent of Natalie Portman and Sir Anthony Hopinks in such a … oh I’m sorry it was a Disney film, yes that makes sense. It Stinks! (Sidenote to the creators of the critic: I am available and am willing to work for almost nothing)

But it wasn’t just the outright movie parodies that made this show so special, the writers structured many episodes around classic movie plots. There are plenty of wonderful references, from the Lawrence of Arabia send up Sherman of Arabia, to the Gone With the Wind style Dukerella. But the hands down best has to be season one’s Miserable in which Jay is kidnapped and nearly killed by an obsessive fan ah la the Kathy Bates joint Misery.

This show was a perfect combination cynical hatred of typical Hollywood garbage and loving references aimed at hardcore cinephiles (I’m not talking about people who are sexually attracted to movies).

I Can See it in the Stars

Much like it’s sister series The Simpsons, the writers of The Critic seemed to have some sort of mystic connection to future events. There were throwaway jokes about the Seinfeld reunion (which actually happened in 2008 on Curb Your Enthusiasm), NBC falling to Fifth in major network ratings (in 2011 in which NBC/Cable Clown finished behind Univision in viewership). Heck, they even predicted some of the terrible movies we’d get forced down our collective throat for years to come.

L.A. Jay predicted the terrible third Ghostbusters movie two decades before Paul Feig laid a big steaming pile of B-Material all over the childhood of every kid born before 1995. (Honestly, that travesty would have been far more enjoyable if they’d shot an 80-foot Rudy Giuliani in his groin). Jurassic Park 2: Revenge of the Raptors, predicted the awful sequels we’d get five and twenty years in the future in which the brainpower of the Raptors became the easy out for lazy screenwriters. 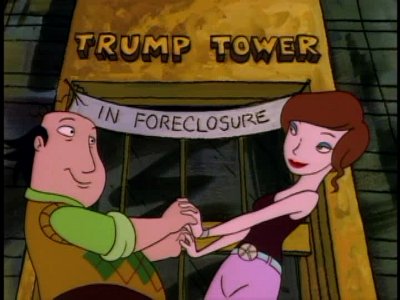 But the most significant prediction was in the episode All the Duke’s Men in which Jay’s blonde megalomaniac media mogul boss Duke runs for President on a nonsensical platform of bullshit. He nearly wins, but thanks to our hero’s change of heart Duke’s campaign is sabotaged at the last moment, unlike in real life because worst possible timeline and all. 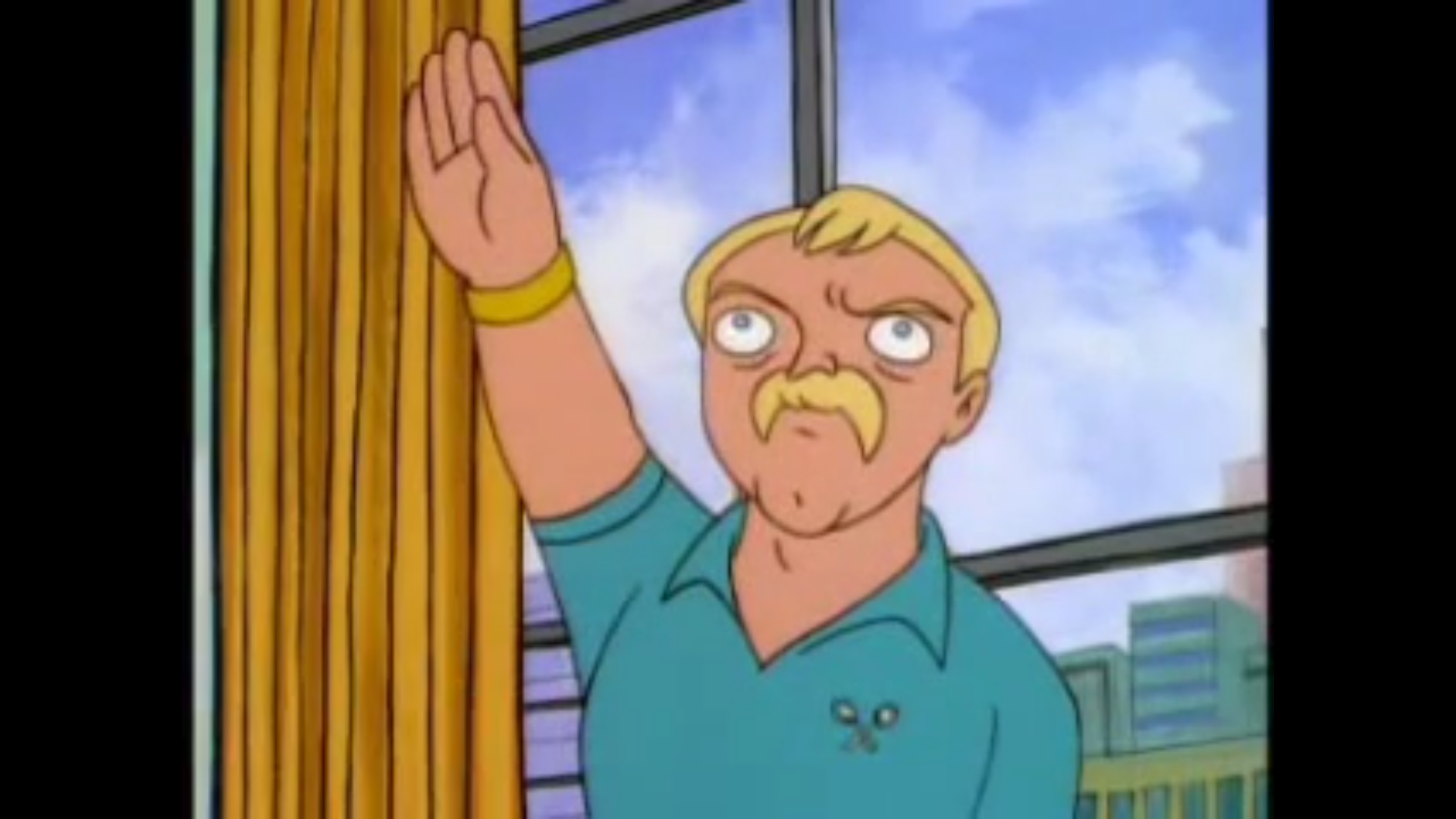 Oh What a Cast!

The Critic boasts one of the greatest voice casts in T.V. history. Master Thespian/Noted Andy Dick ass-kicker Jon Lovitz headlines alongside the late, great Christine Cavanaugh as Jay’s son Marty. Rhea Perlman, Nancy Cartwright, Gerrit Graham, Charles Napier, Tress MacNeille and Doris Grau round out the formidable voice cast with Maurice LaMarche (aka the guy from everything) as pretty much every character.

In addition to what is essentially the Justice League of voice casts, this 90’s classic also featured some pretty fantastic guest stars. Jay’s peers Gene Shalit, Rex Reed Rodger Ebert and Gene Siskel all made appearances as themselves. Geraldo Rivera, Kareem Abdul-Jabbar, Bob Costas, Queen Latifah, Milton Berle and Adam West (RIP) were also featured on the show. What more could a 90’s kid ask for? Unless you’re one of those 90’s kids that was born