We are here to talk about the Series Spread from Writer Justin Jordan with Art from Kyle Strahm.  On January 13 , Spread #12 comes out with guest artist... 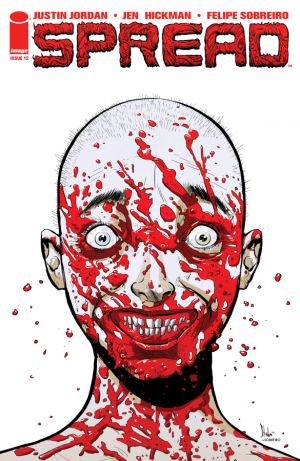 We are here to talk about the Series Spread from Writer Justin Jordan with Art from Kyle Strahm.  On January 13 , Spread #12 comes out with guest artist Jen Hickman. The Geeked Gods got the chance to talk to Justin Jordan and Jen Hickman about the special issue:  The next chapter in the series is Issue #12 out on January 13th we discuss why this is a special issue via Image Comics

How would you describe the series for people looking to pick up Spread?

JJ: My really short pitch is that it’s Lone Wolf and Cub in a world where John Carpenter’s   The Thing ate North America. Basically, ten years before the start of the book a shifting, unstoppable organism, the Spread, has basically eaten the modern world. Our main character No has found a child who can destroy the Spread, if he can keep her alive.

JJ: Basically, I’ve been a big fan of Lone Wolf and Cub since I was a teenager. And at some point, probably watching the Walking Dead, I was idly pondering having that dynamic – a stupendous bad ass and a small child – in a world with zombies.

But I didn’t want to write about zombies. So when I read an article about, basically, how the biochemistry of how cells produce energy isn’t the only or best way it can happen, I got this idea about what amounted to a hyper virulent ecosystem that just outcompeted us.

And that ended up, eventually, becoming Spread.

Issue #12 is described as a Special issue of the series, where we will learn more about a specific character, what can the readers look forward to?

JJ: A lot of insight into who Molly is and who she got where she is. Hopefully, we can see more about the world of Spread in general and how society, such as it is, operates in the Quaratine.

How was it being a guest artist on this series and what was the collaborative process like?
JH-It was a huge honor to get to bring my work and art style to the world of Spread. The collaborative process was no different than any other project- I read the script, asked questions, got design input from Kyle, drew layouts and got feedback on those, then kept going. I think for me the only new thing was NOT coloring my own work. And that was really exciting! Felipe Sobreiro does really gorgeous work.

The art work is brilliant I feel like the illustration and colors make the story come to life and yet some parts are very disturbing, how was it working together on this special issue?

JJ: It was great. I wanted Jen to do this issue from the start, and aside from her skill as an artist and storyteller, is that her art style is huge contrast both from Kyle’s regular style and from the subject matter in this issue. Which she pulled off brilliantly.

JJ: A lot more falls on you. For the most part, with work for hire, my entire involvement is writing the script. Everything else, all the work involved in making sure the wheels keep spinning, is handled by editorial and production.

Even with Spread, where we brought on Sebastian Girner as editor, I am involved in all the stuff, so there’s a lot of stuff to coordinate. The upside is that the book is just what we, the creators, want it to be.

What one piece of advice would you give comic book writers and artists about pursing Creator owner books?

JJ: It’s going to be more work than you think. No matter how much work you think, you’re wrong. It’s worth it, but be aware that getting a book out, at all, is a tremendous amount of work and you need to be able to handle it to get the book out .

Where readers can find other works by you and where can people get in touch with both of you?
JH: I try to be active on tumblr, at umicorms.tumblr.com, and I have a portfolio website that eternally needs to be updated at umicorms.com

Check out Issue #12 of Spread this Wednesday and if you haven’t pick up Vol 1 and 2 of Spread TPB available now via Image Comics. 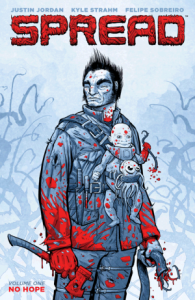 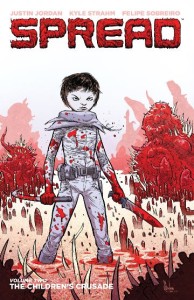