In the Pines: 5 Murder Ballads-Advanced Review by Rachel Bellwoar @ZiggyStarlog The popularity of murder ballads isn’t contingent on who sings them, but it’s true that many of music’s greats...
by Rachel Bellwoar May 24, 2017 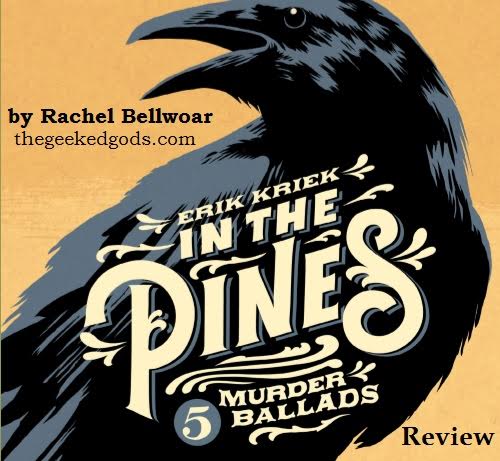 The popularity of murder ballads isn’t contingent on who sings them, but it’s true that many of music’s greats have—Johnny Cash, Nick Cave. America’s strained relationship with true crime continues. Sickened by the statistics, mesmerized by the stories, murder ballads ask listeners to pay attention to lyrics that aren’t elusive about their subject matter. Maybe you get caught up in the repetition and haunted undertones, but the minute the song registers as murder you can’t un-hear the words. 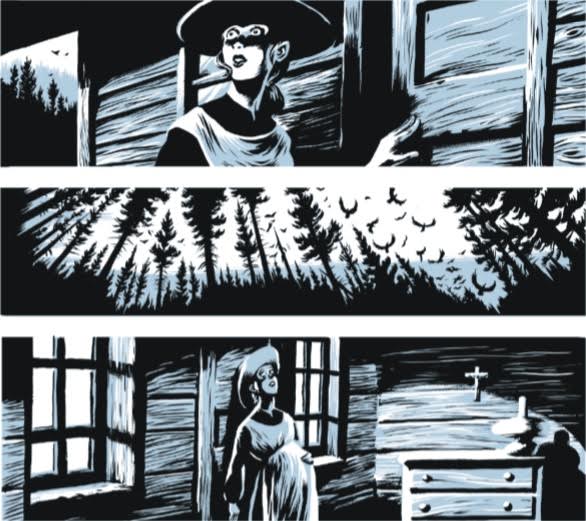 But say you do manage to block out the meaning, or are uncomfortable with enjoying a song about slaughter. What music sometimes gets away with can’t hide on the page, and Erik Kriek’s graphic novel, In the Pines: 5 Murder Ballads, won’t let the grisly stay invisible. Horror registers in characters’ wide-eyed expressions of fear. This doesn’t feel like a bad thing. If we’re going to sing about murder, the least you can do is be honest.

Kriek doesn’t attach images to lyrics and call it a day. Grouping songs into categories can give them the illusion of being homogenous, but the circumstances for murder in these five ballads are diverse. Readers are going to expect the worst (and who dies, and how, can be easily discovered) but even fans who are studied in these tunes will find some surprises. By writing the narratives out of sequence, there are a great deal of aha moments, as the timeline sorts itself out. The emphasis on ink, with one color per ballad (and tan counts as a color) puts mood before sensationalism or blood.

Kriek’s adaptations expand upon and flesh out already rich stories to draw out minor characters and include consequences. “Where the Wild Rose Grows” provides an answer to the lyric “why they called me that [Wild Rose] I do not know.” In “Pretty Polly and the Ship’s Carpenter,” many iterations of “Pretty Polly” end on Polly’s death but Kriek goes back to the song’s source, “The Gosport Tragedy,” to show what happens to the killer at sea. It’s not that Kriek adds some justice for Polly out of wish fulfillment, but that the song usually leaves that part out. There’s more to getting away with murder than not getting caught, and in returning some of that judgment, Kriek remembers the emotional cost to taking a person’s life.

Minor characters require some original backstory, but the inflation of their roles is like the release of withheld information. They don’t negate what we already know but illuminate old facts. There’s the sailor in “Pretty Polly” who sees his crew members suffer bad turns and still climbs a mast to help. In “The Long Black Veil,” Daniel is visited in prison by his best friend, Graham. Unbeknownst to Graham, Daniel’s been having an affair with his wife, so when Graham doesn’t help Daniel at his trial like he promised his ignorance becomes a question unto itself.

Jan Donkers provides the volume’s mandatory essay on the songs. This is no comment on Donkers’ writing but the choice to bring in another voice at the end feels sudden. While Donkers can go over history and some of the selections Kriek made, he can’t speak on specific choices like Kriek could. It’s these choices that allow In the Pines to add to the dialogue around these songs that have tested time.

In the Pines: 5 Murder Ballads

Written and Drawn by Erik Kriek

The Normals #1-Review-Was it all a Dream?