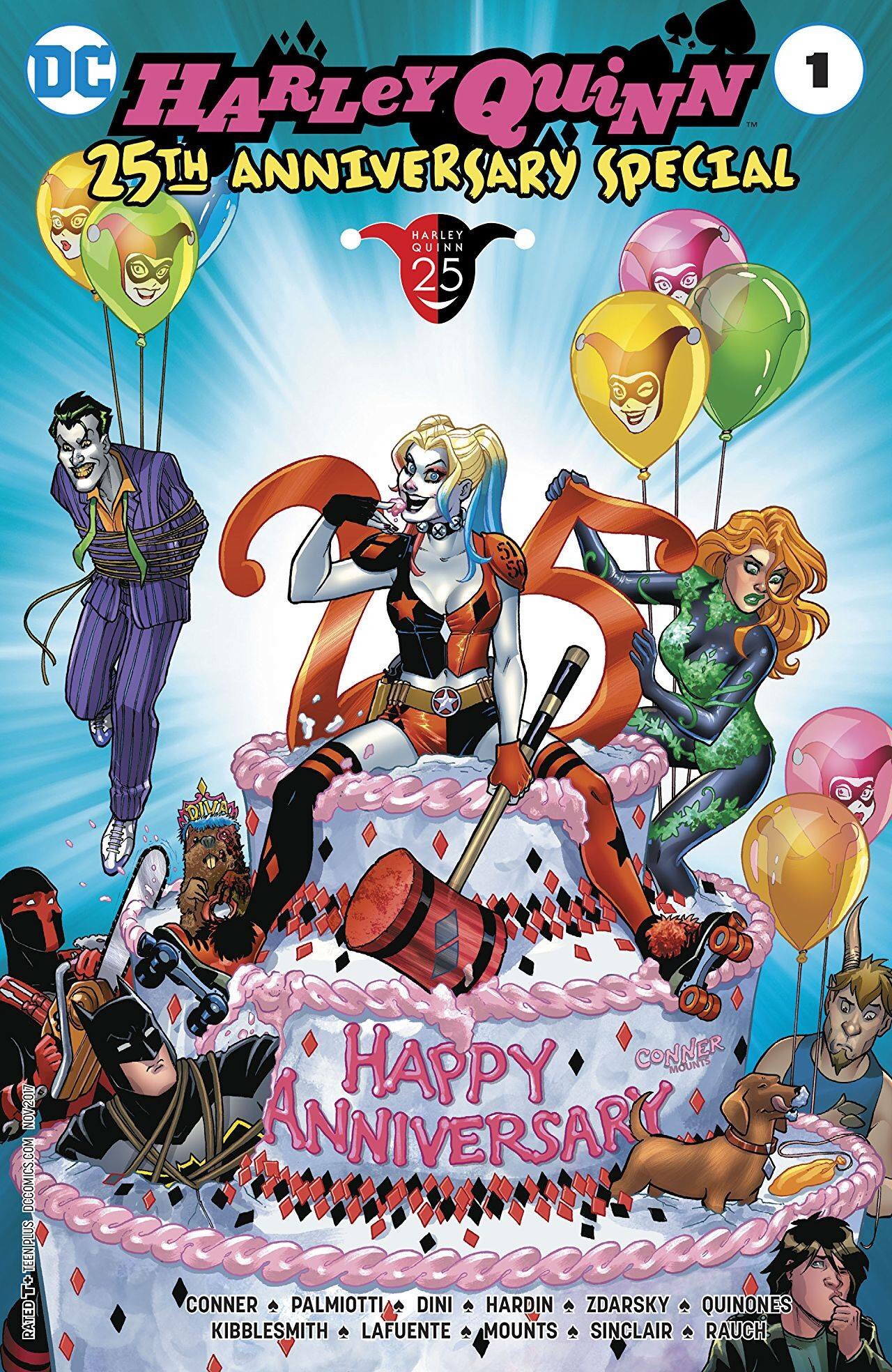 This week marks the 25th anniversary of everyone’s favorite Psychologist Harley Quinn first appearance on Batman the Animated Series.  Harley Quinn is one of the most popular characters in the DCU it’s nice to see how far the character has grown over the years. To Celebrate Harley’s birthday, DC has released a 25th Anniversary special. The special contains four stories from some of the best writers and artists around. Each story is fantastic and tells a different Harley tale.

The first story Diva Las Vegas by Amanda Conner and Jimmy Palmiotti with colors by Paul Mounts and letters by Dave Sharpe tells the story of Harley Quinn, Poison Ivy, and Cat Woman’s Las Vegas trip. We see Harley Quinn talking to an assassin before their mission. During a game of truth or dare, Harley is asked what happened during their Las Vegas trip. The Story is from a previous Harley Quinn story. It seems the group was going to Vegas ran into a police chase stopping the robbers and were rewarded with a free suite. Harley, Poison Ivy, and Cat Woman decide to throw a party where all of Vegas seems to be invited. The party gets out of hand, and the owner of the casino gets thrown out of a window. Later the assassin asks about a lot of bodies in the desert which Harley doesn’t talk about and tells him to mind his business. Back in the present, the duo makes a bet while taking down Human Traffickers.

Another great Harley Quinn story from Amanda Conner and Jimmy Palmiotti, my favorite writers of Harley. This story had all the elements of what makes Harley Quinn a great character,  Mystery, Las Vegas and action and the audience not knowing what happened. I for one would love to party with Harley Quinn. The Art and colors as always fantastic a great story to kick off the Harley Quinn Special.

Birthday Blue was written by Harley Quinn Co-Creator Paul Dini tells the story of the Joker trying to set up a caper calling all the Gotham underworld at the same time Harley is trying to get birthday festivities done getting a cake. We find out that for Harley Quinn birthday’s have always been somewhat crummy. When Joker comes in pays no mind to Harley and tells her to be the getaway driver for the crime job. Harley thinks it’s going to be another crappy birthday but is surprised. It seems the Joker and Poison Ivy have planned a surprise party for Harley Quinn, but there is more to the story. It seems Joker was forced into throwing the party and if he doesn’t do what Poison Ivy wants he will die. The story ends with Harley happy saying it’s her best birthday ever.

Fantastic story from the co-creator of Harley I did see the twist coming but didn’t take away from the story. It’s nice to see the creator of Harley Quinn writing this story with a throw back to my favorite animated series Batman the Animated Series. Birthday Blues is another great addition to the Harley Quinn Anniversary Special.

This story brings in one of my favorite characters in the DC Universe Swamp Thing.  It’s a fun story and gives more depth to Harley Quinn. One of my favorite aspects of Harley Quinn is her fearlessness even with this craziness she isn’t afraid to throw down. The funniest moment is when Swamp Thing calls Harley Quiin Baby Clown or Small Clown it cracked me up.

In this story, we learn that the Joker has a bomb that will put everyone to sleep. Batman is fighting the Joker, so he sends Robin to disarm the bomb.  The Joker not wanting his bomb disarmed sends Harley Quinn after Robin.  Both Robin and Harley Quinn would rather fight but agree to the task.  We see Harley Quinn square off against Robin. While fighting Harley using her psychological techniques to deduce Robin’s connection to Batman as well as connect with Robin to knock him off his game.  Harley can deduce Robin is an orphan, tormented by his parent’s death and tries to drive a wedge between Robin and Batman. While under attack Robin says he can’t let everyone die. Harley hearing this stops the bomb. At the end we see Batman tell her Joker isn’t going to rescue her which Harley reply’s she knows how his mind works. 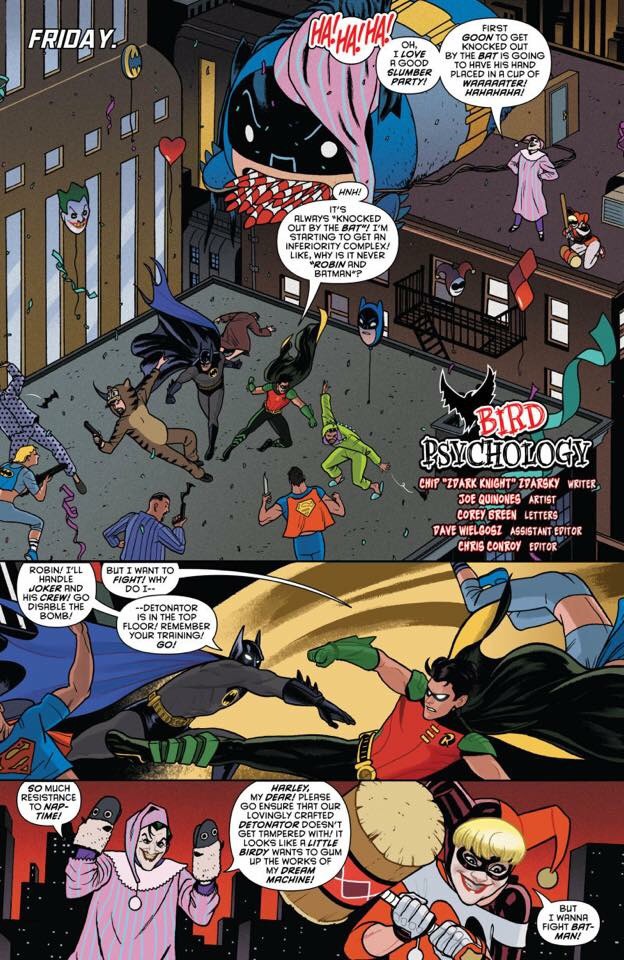 Bird Psychology is my favorite of all the four short stories in the special. Can we please have Chip Zdarsky guest write some Harley. It is easy to forget that Harley Quinn was a psychologist. This issue reminds us that she can get into peoples heads if they let them. It was fascinating to see how she was able to get into Robin’s head and how Harley Quinn will still do the right thing. It’s not often we see this side of Harley. Joe Quinones does a fantastic job with the art on the issue and how to see this creative team on other Harley Stories. 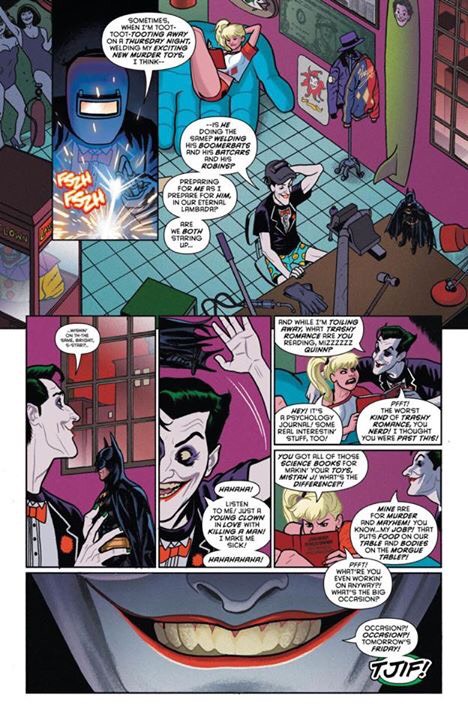 The Geeked Gods Score: Must Own 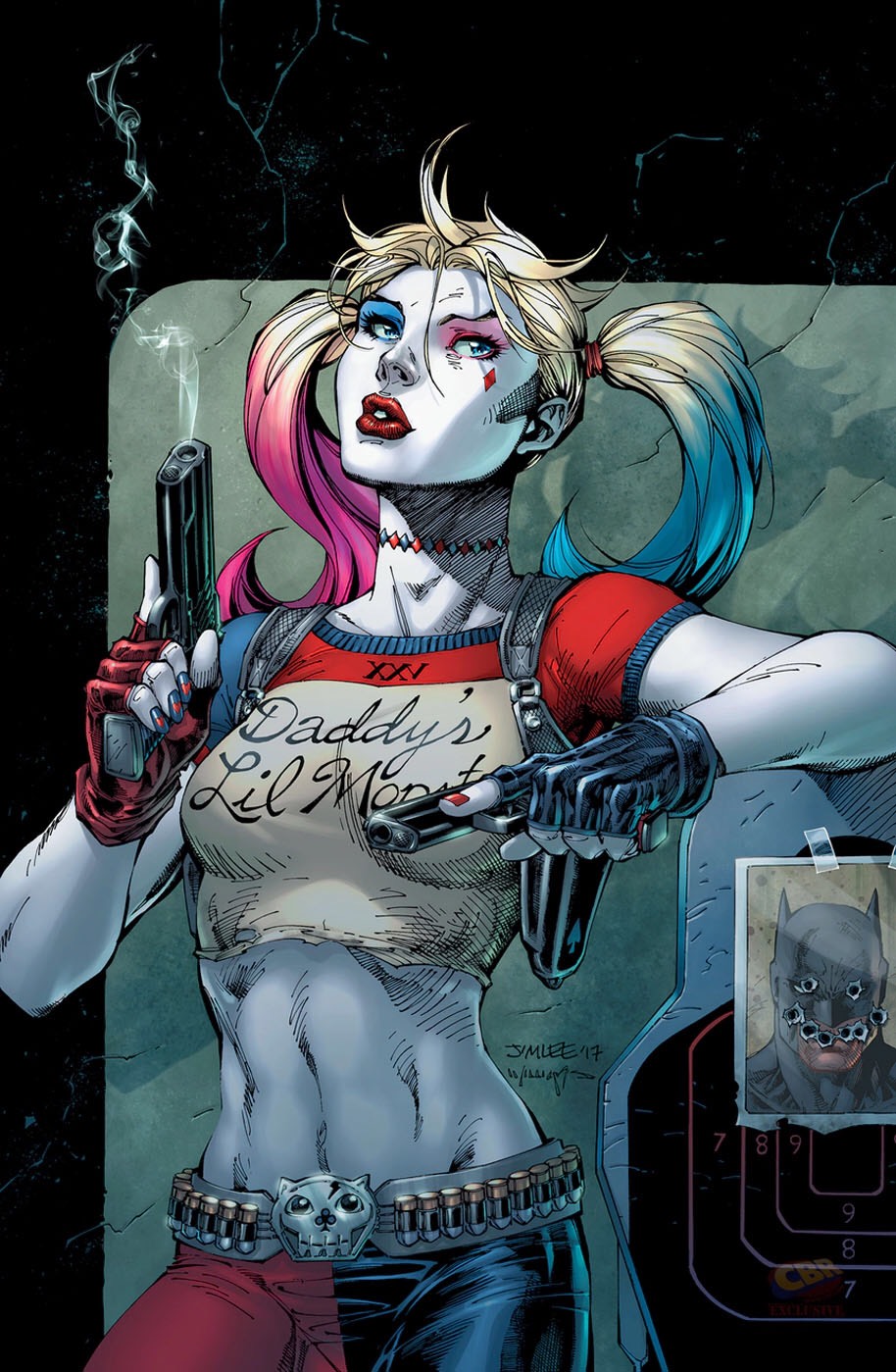