This 2017 lighthearted slasher is wrought with a serious identity crisis. 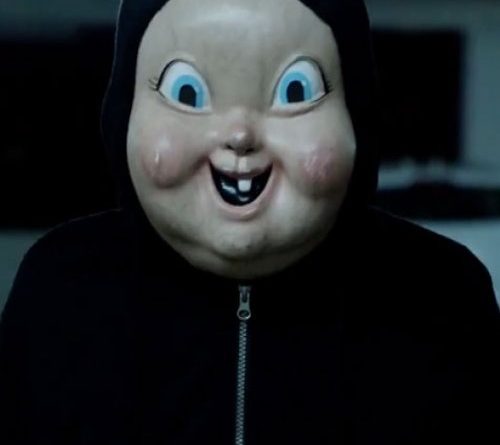 Waking up for many people every day is a problem – but dying every night and then still having to wake up the next morning? Now that would be an issue for just about anyone. In Happy Death Day, this is exactly what happens.

On her birthday, Tree (yes, they really named the lead character Tree) is murdered by a maniac wearing a maybe creepy but more likely funny baby mask. The next thing she knows, she wakes up in the exact spot she did the previous morning, in a random boy’s dorm room. Understandably, she is concerned; but things get even stranger once she’s killed again the following night. And the next night. And the next.

It’s Groundhog’s Day with a slasher flavoring. But Happy Death Day is much more Goosebumps than Giallo. The film is built upon an interesting premise, watered down by director Christopher Landon’s decision to style it like a movie set to air soon on The Disney Channel tends to make it oftentimes very frustrating. It could have been genuinely scary, but instead, it’s too flowery and pink to be anything but silly.

Which, surprisingly, turns it into something very suitable for a teenaged date night. It’s self-aware and unafraid to poke fun of itself, but anyone over the age of 15 is most likely going to leave the theater disappointed – if they decide to go see it at all, that is. It’s distributed by Blumhouse but marketed as exactly what it ends up becoming; a silly horror comedy that’s barely horror besides the fact that Tree gets murdered a lot.

My real issue with the movie is the tone. It’s too bright. It’s too fluffy and devoid of any feeling other than “this movie is going to make a pretty penny.” I don’t think that Happy Death Day has anything substantial to say, despite the fact that over the course of the movie Tree transforms from a bratty sorority sister to a caring young woman. The problem is, we really didn’t need a horror movie for Tree to make this transition.

And I’m sorry to say this, but if you need to be murdered every day in order for you to pick up the phone when your father calls you on your birthday to send good wishes and meet for lunch, you may be beyond saving. Sorry, Tree, I’m not buying it!

I will admit, however, that Jessica Rothe nails the script that she’s been given – unlikable as her character is for the majority of the running time. She seems to be an excellent actress. It’s not her fault the entire movie is so confused as to what it wants to be.

Maybe I’m just in the wrong demographic for this film. Truthfully, if I wasn’t assigned to review the movie, I would have had no interest. But I can’t even see kids being scared from the film. Which is what is so frustrating, because if it focused more on Tree becoming a better person without all the murder, it would most definitely be a fine enough kid’s flick. Unfortunately, it’s October, and Blumhouse needs a horror movie out this time of year. This is possibly the only real reasoning I can make for the movie’s existence. When people bash on PG-13 horror movies, Happy Death Day is why.