Is Baby Groot the best thing to ever happen to cinema? Yes. Yes he is. 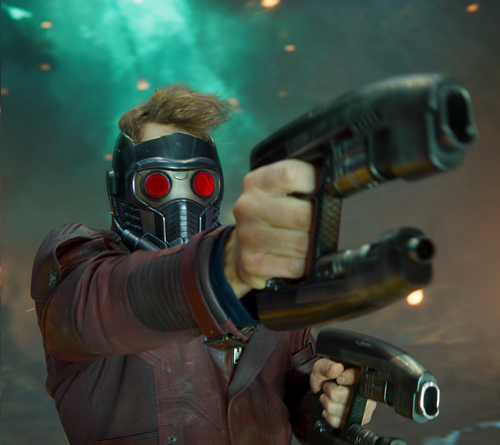 The first role I had ever seen Chris Pratt in was the pilot episode of Parks and Recreation. A chubby, lazy, and dimwitted loser, the character of Andy Dwyer somehow managed to take all of these traits and turn them into something so loveable and endearing that it was almost obscene. Watching the show, it was very hard to imagine Pratt in anything but this specific sitcom; it was as if he was made for the show. Eight years later, this now becomes a laughable statement.

If there was any doubt that Pratt was destined for anything besides Peter Quill a.k.a. Star-Lord, it will be nothing short of obliterated due to his performance in Guardians of the Galaxy Vol. 2. While the first film was a breakthrough hit with a concept that was very much a gamble on Marvel’s part (there are no heroes of the same caliber as Spider-Man or Iron Man here), the sequel is reaping the benefits of that successful hand and anteing up. Despite what you’ve heard, yes, sometimes bigger is better. The jokes are more abundant. The explosions are loud enough to make you wish you had brought earplugs into the theater. The visual effects are the most precise and astounding that have possibly ever been executed. The dynamics of the Guardian’s relationships are further solidified. There is more heart; more action; more sense of wonder than in any other Marvel film that has come before. And yes, more Baby Groot. If there has been a film that is simply more entertaining, more exhilarating, more fun than Guardians of the Galaxy Vol. 2 produced in recent years, well, I haven’t seen it. And frankly, it’s hard to believe that one exists.

James Gunn’s Guardians of the Galaxy Vol. 2 is a science fiction/action/comedy hybrid that, at the end of the day, is all about family and finding out where you belong in this strange and perplexing cosmos. After a heist gone wrong, the Guardians (with Baby Groot in tow!) need to make a quick escape to a nearby planet. It is here that Peter Quill finally meets his long-lost father. Ego, played by the incomparable Kurt Russell, is more than just Peter’s father: he’s a god. (Litte “g,” as Ego points out.)

At the same time, Gamora (Zoe Saldana, who is becoming a sci-fi powerhouse in her own right) has her growing pains to soothe, as her relationship with her sister Nebula (Karen Gillan) is put through the ringer once again – to say the very least. While Gamora and Drax (Dave Bautista) accompany Peter to Ego’s planet so that he may explore his relationship with his father, Rocket Raccoon (Bradley Cooper) and Baby Groot and left on the planet to repair their ship and see that Nebula doesn’t escape. It is here that Yondu (Michael Rooker), tasked with returning the Guardians to a vengeful alien race, decides to show mercy on Peter and company and is mutinied by his crew.

Rooker, an unstoppable actor capable of playing the baddest of the bad, might have stolen the show from Pratt in Vol. 2, but it’s an extremely close call. Both roles are played with intensity and heart, and after witnessing the awesome spectacle that is Guardians of the Galaxy Vol. 2, it sure will be hard to ever look at Rooker again without thinking he seems funny not being painted blue. In fact, all of the performances down to the secondary characters are outstanding. The fun the cast and crew must have had while working on this film is insurmountable, and to resist joining in on it during the nearly two and a half hour runtime is a pointless task; it’s just not going to happen. Smiles abound, I laughed along with the audience for the entire duration of the film. Sometimes it was the humor. Other times it was from pure excitement. The good-natured adrenaline contained within James Gunn’s film may be lethal.

The fun the cast and crew must have had while working on this film is insurmountable, and to resist joining in on it during the nearly two and a half hour runtime is a pointless task; it’s just not going to happen. Smiles abound, I laughed along with the audience for the entire duration of the film. Sometimes it was the humor. Other times it was from pure excitement. There should have been a disclaimer during the opening credits: The good-natured adrenaline contained within James Gunn’s film may be lethal.

But the biggest success of the film is that a clear feeling of real emotion is able to be wrought from the screen through all of the psychedelic carnage and explosive space battles. Gunn has created something very special with this film. While most movies are content to present the audience with straightforward escapism, Guardians of the Galaxy Vol. 2 confronts us with some very wholesome yet important issues. As Quill is presented with a new path for his destiny, he must ask himself what is more important: to live in infamy alone, or to live as a common man surrounded by those you love? And what really decides who your family is, anyway? Is it simply biology, or something deeper? These questions don’t break any new ground. Still, they are ones that many of us need to be reminded of all-too-often.

Even if you don’t care about any of that stuff, Baby Groot is just too adorable. See it for that, if nothing else.