Gotham Season 4 Premiere: ‘Pax Penguina’ Review The subtitle for Gotham season four is “Dark Knight,” and sure enough, the first sight we see this episode is Bruce Wayne,...
by Rachel Bellwoar September 22, 2017

The subtitle for Gotham season four is “Dark Knight,” and sure enough, the first sight we see this episode is Bruce Wayne, fighting crime. A massive development, if his current costume’s basically a ski mask, the show revels in the start of Bruce dressing up as Batman. It’s so rudimentary he doesn’t have a voice modulator (Oliver Queen would be mortified), but Bruce has come a long way, and this episode includes pointed scenes of characters noting the difference (if sometimes distractingly pointed).

Another character appearing in costume is Jonathan Crane. Beyond the name, my knowledge of the Scarecrow’s not much to go on, but I’m curious what his role is building up to on Gotham. By the end of the episode, he’s wearing his full Scarecrow gear but lacks the intent of a Tetch or a Barbara. He’s a scared, young boy whose father infected him with a toxin that’s left him struggling to function. To those who locked him away, he’s shown he won’t be forgiving, but does he have a master plan, like the Penguin or the Riddler?

Speaking of Penguin, since he’s been infected with the toxin, can the show proceed without a cure, and if they don’t, where does that leave Scarecrow? To bring him back after appearing once in season one isn’t arbitrary. I just haven’t figured out where Crane fits into Gotham yet.

No longer mayor, the Penguin’s bounced back quickly as head of Gotham’s underworld. His new license policy’s caused Gotham’s crime rates to plummet, by requiring criminals to run their jobs by him. If they accept his oversight, they can have his protection, and commit crimes with a get out of jail free card (I love that Penguin’s stamp on the card is an umbrella insignia). 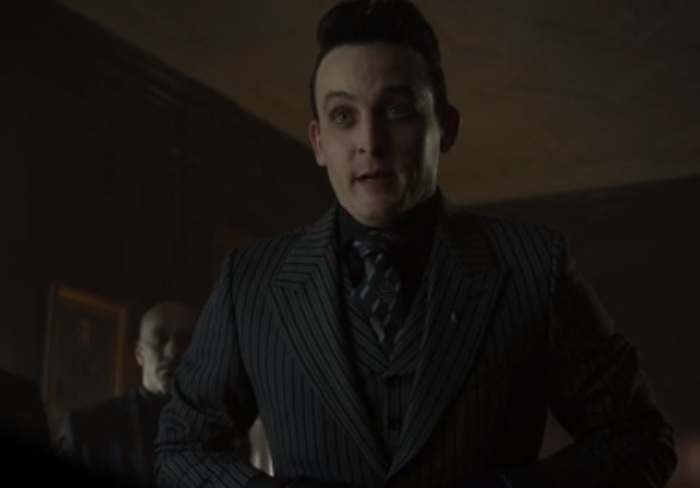 Of all shows, this storyline reminds me of season three of The Wire, when Bunny tried to legalize drugs in a section of Baltimore. The reasoning behind his plan, like Penguin’s, was that drugs and crime would always exist in some capacity. Instead of trying to eliminate these activities outright, they sought to instate guidelines and, in Penguin’s case, make a profit.

Audacious, certainly, these are trying days for Jim, as probably the best thing to come out of Penguin’s policy, besides the less crime part, is Jim having to consider playing along. Jim’s never hesitated to disobey orders when he’s disagreed with them before. To have Penguin’s results give him pause about making arrests is a scary first for him. There will always be something admirable in Gordon’s refusal to bend the rules, but Penguin’s success forces him to question his tactics. Who is best serving their city?

Another highlight of ‘Pax Penguina’ is Michael Buscemi (brother of Steve) playing our villain of the week. That he doesn’t use Crane’s toxin on Gordon and Harvey seems a lot like the show playing favorites, but it’s a great guest turn by Buscemi nonetheless. 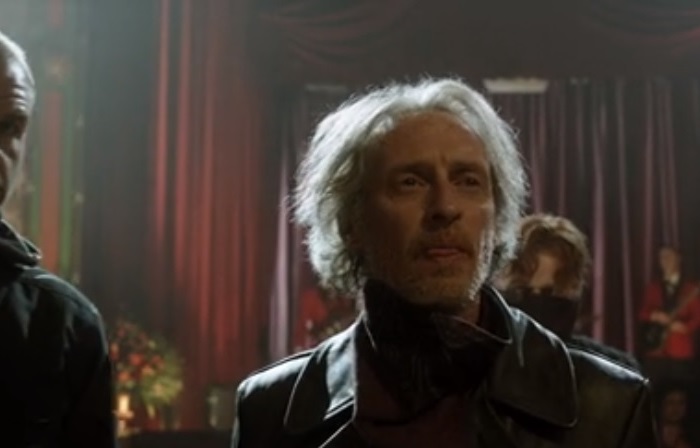 I’m not sure where Jim’s continued faith in the GCPD is coming from (they’ve ALWAYS failed to help him in the past), but other than Scarecrow, and Jim’s career woes, the biggest question this episode is what’s up with Penguin? How is he really doing this year? Because besides the toxin, and the good things going his way, there are hints that Penguin’s reign won’t last. Victor Zsasz has a lot of control in their current arrangement, Ivy’s not so loyal after all, and then there’s the frozen Riddler statue in the middle of the club, an elephant in the room if there ever was one.

What did everyone else think of the Gotham season four premiere?