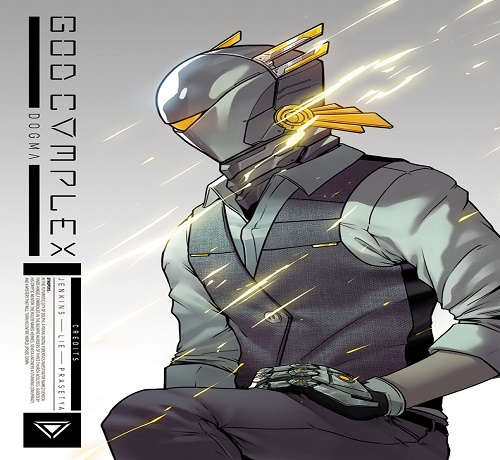 We don’t need to read between the lines to know that the techno-futurism of God Complex has turned the world into a dystopia where a class of people known as the Rulers are superior to regular people, such as digital-forensics investigator Seneca, the protagonist of this new sci-fi series by Bryan Lie, Paul Jenkins, and Hendry Prasetya. The tone of the story is unsurprisingly a bit bleak. 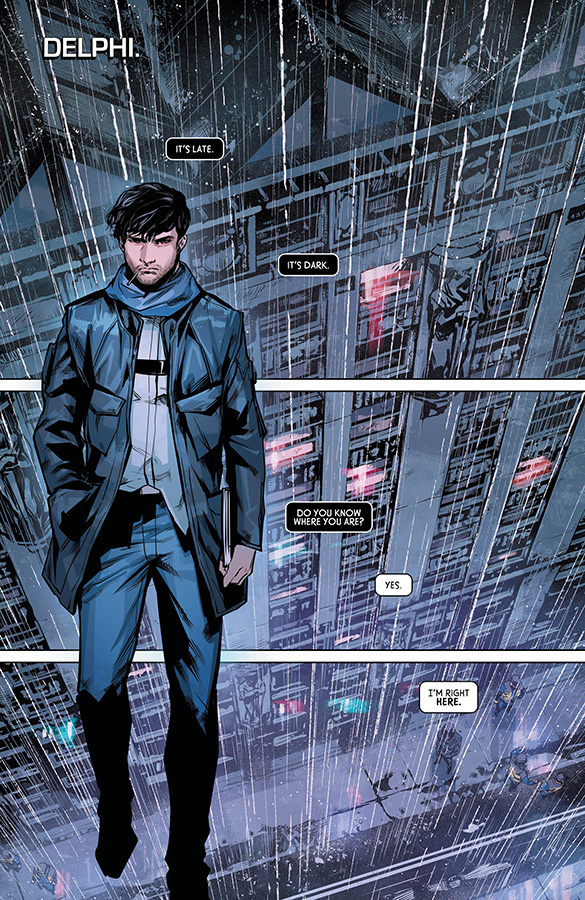 God Complex opens as many detective yarns do: with some dead bodies on the street. Three acolytes from a techno-phobic religious movement known as Trinity have been found dead and it’s Seneca’s job to get to the bottom of it. Of course, from the very beginning, there’s the sense that something much bigger is afoot. Enter Hermes, a Ruler — a genius who can manipulate a digital world known as the Stream and has a weird helmet for a head. He is Seneca’s main foil and shows just how out of his element Seneca is with this investigation. 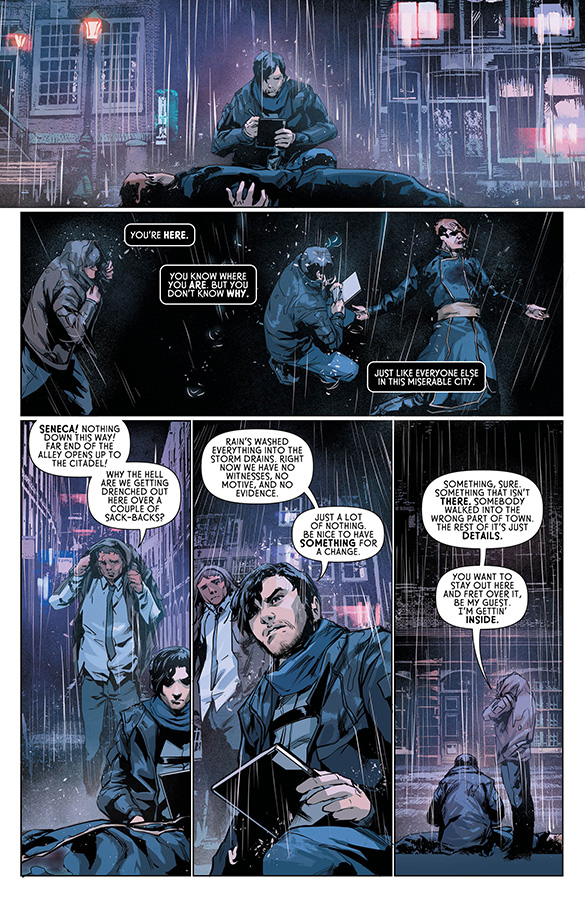 Hermes senses that there’s a much bigger conspiracy behind the murders, especially after someone tries to hack into the Stream. The way the Stream works is still a bit of a mystery, although it is explained that the Rulers can access it at will while Seneca finds this digital representation of the world still a bit wondrous. Unfortunately, the issue’s central conceit is a bit unclear throughout and the high concept sci-fi aspects of the story are a bit difficult to follow. 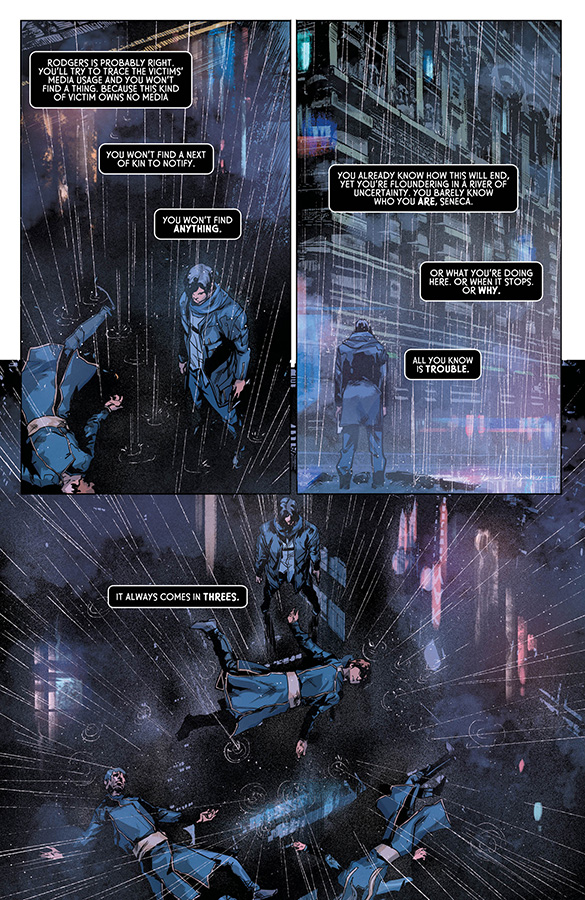 Seneca himself is a tough nut to crack, a distant protagonist that I couldn’t quite sympathize with. Barely any time is really spent trying to flesh him out beyond the fact that he’s incredibly skeptical of the whole mess he finds himself in throughout the issue. Hermes is ultimately more interesting, although he’s also pretty distant. 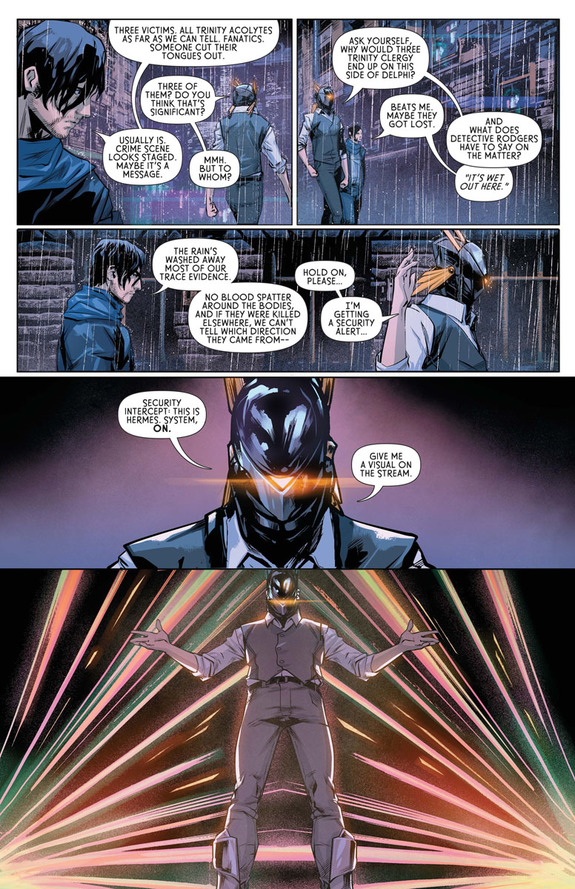 The problem may lie with the fact that Jenkins switches from one idea to the next at bullet speed, from the murders to the Stream to the fact that Seneca can hear voices inside his head to the enigmatic Trinity. There’s so much being set up in this opening chapter that it doesn’t allow you to find much solid ground in the narrative. Of course, perhaps that’s what the writer is going for here, a sort of disorienting introduction into this dystopia that will give way to a clearer picture down the line. 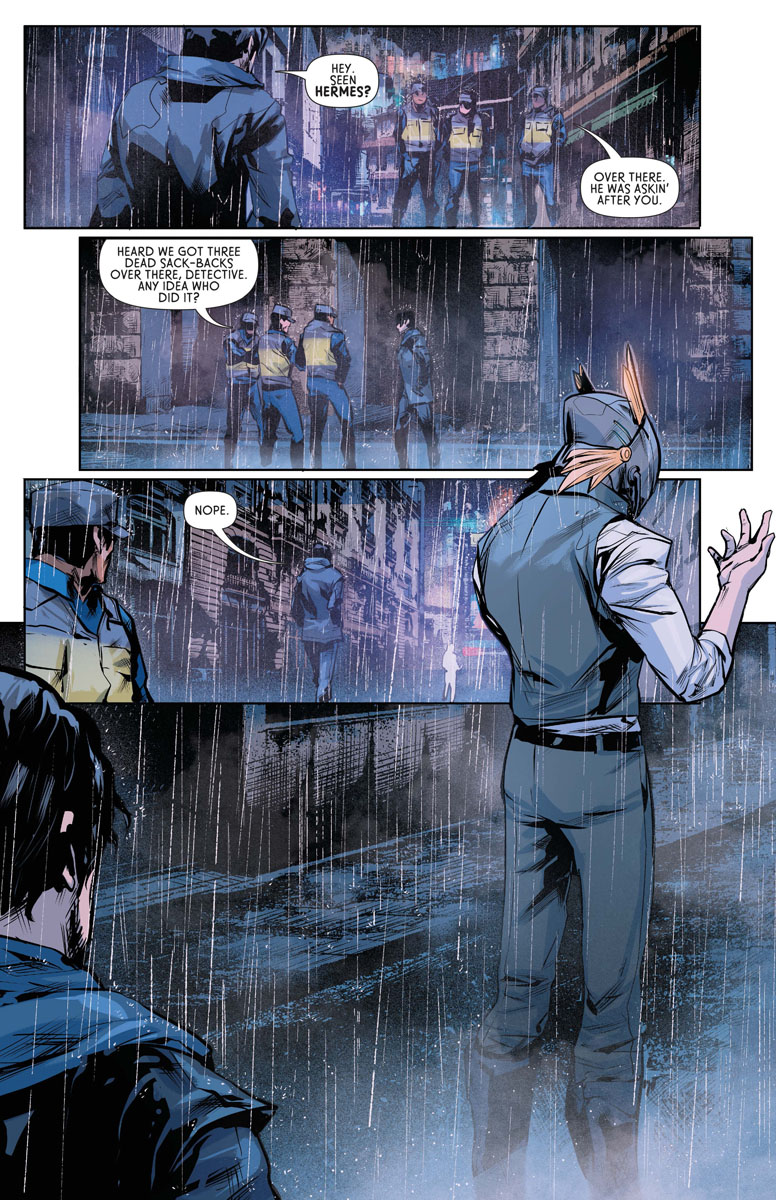 I sure hope so because the art portion of the comic is absolutely spectacular. Prasetya’s panel work is stunning. I especially love the way the artist establishes setting, showing us the skylines of this giant city, complemented by Jessica Kholinne’s washes of color, which are beautiful and textured. You can almost see the steam rising up from the asphalt. I hope that Prasetya gets an opportunity to take us deeper into the Stream because there’s a lot of potential for beautiful visuals from this artist. 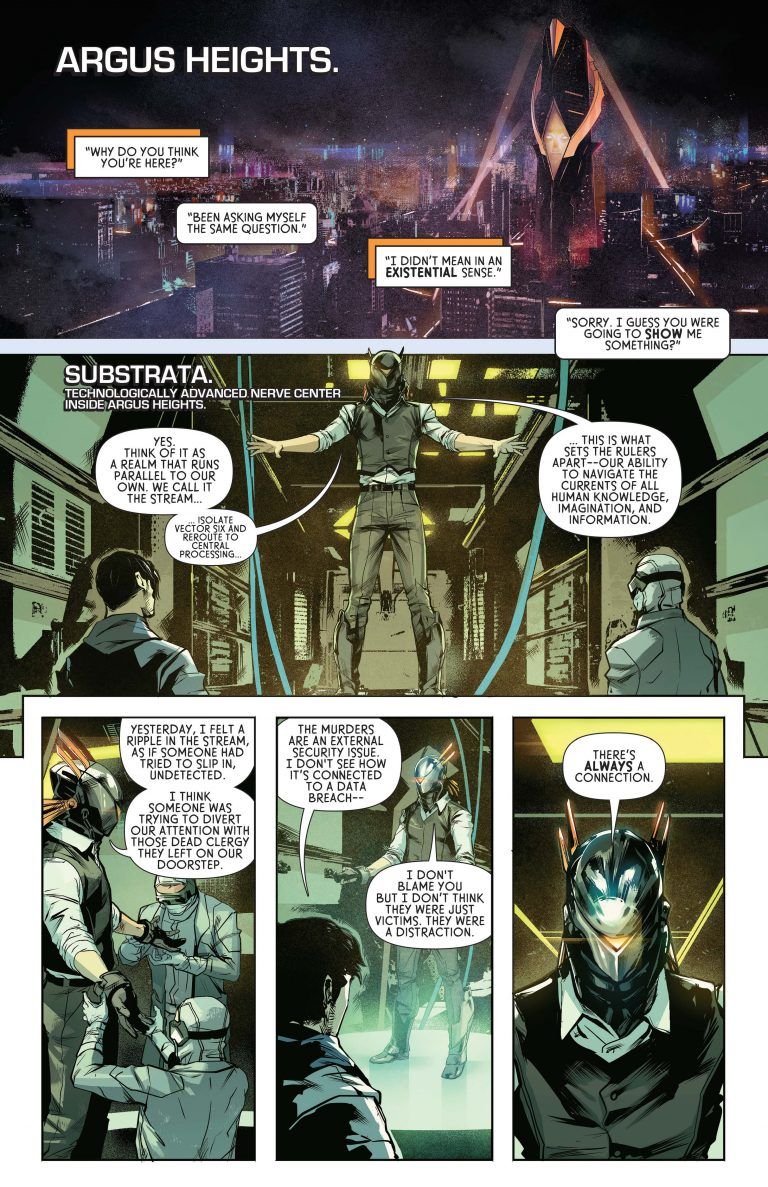 While God Complex isn’t quite the easiest read, it is definitely one of the most visually stunning I’ve seen in a while. The art team is spectacular. Once things become a bit more clear in Seneca’s world, we’ll hopefully also have an easier entry point into this intriguing story.